From Uncyclopedia, the content-free encyclopedia
(Redirected from Hooligans)
Jump to navigation Jump to search

Football hooliganism is widely known as the second national sport of Great Britain (behind making up Oscar Wilde quotes) and is by far the country's most widely practiced activity (except for making up Oscar Wilde quotes) . Its cultural impact is obvious to any foreign visitors, who are often struck by the surprisingly high proportion (about 60%) of the populace made up by obese middle-aged men with St. George's crosses painted onto their shaved heads.

Every four years, crazy fans from all over the places like Britain and Communist Madagascar there is what is known as the Soccer World Cup ("Soccer" pronounced as "Sock-uhhh") - For 99.99% of countries the game is referred to as football.

In reality soccer/football is not what the World Cup is about... the truth is more sinister. For example, in 1999, Brandi Chastain of the US women's team delivered the winning goal against China in a shootout during the world cup. She continued to rid herself of her shirt, essentially giving the whole world a view into the kind of striptease she has given Bill Clinton and Alfred Nobel in the past. As you can see, the women's world cup is really about seeing topless women.

Essentially The World Cup was borne from nations no longer really having proper wars. As a result of this there became a palpable atmosphere of pent up aggression. To combat this every nation entered circa 10,000 hooligans (the code name for the under cover soldiers) to have a rumble to see who the hardest nation was and to release the aggression.

The roots of hooliganism have been dated back to medieval times, from whence the first known chant was recorded by Chaucer in his lesser-known sequel to "The Canterbury Tales", "The Manchester Tales", which chronicles the passage of a group of burly Liverpool fans on their sacred pilgrimage from Liverpool to Manchester in a horse-drawn cart painted red and white with racial slurs daubed across it.

Marrie, for 'tif thee autumm, and thee levef are turn'd to gold
Lett uf quaff and carouff af inn thee daef of olde
Then watche uf a group of menn kicking a balle,
And act lyk a bunch of twattf, alle. [1]

The existence of this writing has led many to speculate that Chaucer himself might have been a hooligan — however most experts dismiss this theory on the basis that, while his spelling was atrocious, he could actually write, and thus had at least double the average mental faculties of a hooligan.

All in all, they just suck.

Before taking part in the sport of hooliganism strict dress codes are required- the most important are: 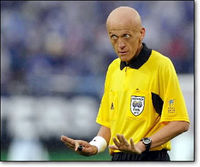 Are you f***ing blind ref? I will kill you and your family while you sleep!

Once appropriately attired, prospective players are ready to start engaging in hooliganism. Opinion differs on the exact way of playing, but the general procedure is agreed upon by most: firstly get riotously drunk on either Wife Beater[3] or Carlsberg, such that your self-confidence, particularly with regard to your physical strength and attractiveness, is wildly inflated, but that you still retain gross motor skills; you will need them later. Next, go to a football match. Who is playing is largely irrelevant[4], but it is wise to pick a team to support beforehand- whoever is playing at home is usually the best choice since they will have a larger crowd (i.e. more allies).

During the match join in on as many derogatory chants as you can and generally act in a threatening manner. You should start to feel like a big man, and that the idea that you could have erectile dysfunction is laughable. One particularly helpful target of abuse is the referee, by whom any decision favouring the opposing team, no matter how reasonable, should be considered a personal affront, the revenging of which is vital to the retention of your honour. This should be done by further increasing your obnoxiousness and hurling occasional bottles in his general direction.

Finally, after the match it is vital to find out who won- if it is the team you were supporting then your beer-fuelled rampage will be in celebration of your glorious victory and in scorn towards your unworthy opponents. However, if it is the other team who won then your beer-fuelled rampage will be an act of defiance against those cheating bastards. Once clear of the grounds you should assault as many targets as possible in as violent a manner as seems appropriate (which, by this point, should be fairly violent since you will hopefully have been drinking steadily through the match). Also, making lewd comments towards women and implying that they would be fortunate to engage in sexual congress with you, in spite of the overwhelming and obvious evidence to the contrary, is considered a sign of good play.

The morning after the match you should ideally be waking up in a pool of blood and/or vomit- whether yours or not is immaterial. The more grievously you are injured, the better, since this adds greater weight to your mantra for the next week or so: "You should've seen the other guy(s)"

Each football team in Britain has its gaggle of hooligans, known as a firm. Each firm boasts about how many "likely lads" they can bring along for a good toe-to-toe with rival firms and how they "did over" (i.e. made the opposition's mascot cry during the pre-match warm-up or scratched a picture of a penis on the toilet doors) over the ground of their biggest rival. Each firm always claims to be the hardest, bloodthirstiest, most vainly dressed, heaviest-drinking and most likely to shag all manner of slappers. However, it is well known that despite their hardmen personae, hooligans love nothing better than to compare their latest crosstitching efforts and help each other out making flowerbeds with lots of pwetty flowers.

Targets of Violence and/or abuse[edit]

The focus of all your worldly hatred...

In order for your senseless violence to garner you the most credibility, you must direct it towards the correct targets. The accepted targets are as follows, in order of priority (from lowest to highest)

Also, if England is playing against the Germans then don't to chant the great escape. xD LULZ

This cannot be stressed enough: it is impossible to express quite how much you hate the Germans, and every opportunity to goose-step or nazi salute in their direction should be taken.

The top nations with worst and most violent soccer hooligans in the world:

As you will see England actually won the first World Cup - but to show there were no hard feelings - they decided to have a game of Football with Brazil. As they English were drunk (as we do so well) we bet them the real World cup (the for fighting). The long and short of it is that Brazil won the footy match and got the world cup.

Continuing with the England-Brazil game, this match was captured on film by accident - but just so happened to provide a decent explanation for the various nations as to why they were sending their lads abroad for "a tournament". Thus the "official" world cup is Football - but the "real" World cup is actually the fighting that takes place behind the scenes.

You may wish to ask "Why did the nations need to keep it a secret?" Well my friends - it is because of the UN ( United Nations ) and some Human rights act or something. Basically the Democratic Republic of The UN decided that this fighting malarchy was just not cricket and banned it.