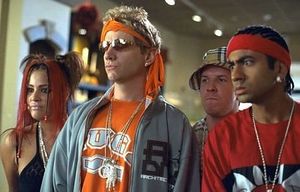 This is a mild case of Ghetto White Boy Syndrome. Seen here with his 'posse'.

Ebono-Cracka Reclassification Syndrome, more commonly referred to as Ghetto White Boy Syndrome is a serious mental infection found predominately in Caucasian males between the ages of 12 and 27, although it also occurs less often in females and people from other ethnic backgrounds (excluding black). One in every twelve white men will experience Ghetto White Boy Syndrome in their life, often times they won't live past 30. 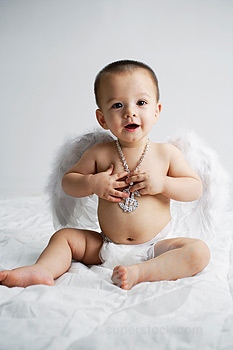 The infected children will exhibit a lacking in their ability to keep their pants up, even with a belt. This is due to the increase of ghettormones being released into their systems. Ghettormones are produced by the male and female reproductive glands, taking away from the natural process of producing sperm and egg cells, making the infected much less desirable to the opposite sex.

Over time the ghettormones will increase and build up in the body of the unlucky victim. Speaking will become slurred and will lose all meaning in the ears of normal children. Greetings like "hello my friend, how are you?" will turn into such vulgar phrases as "Yo bitchiz, whazz pimpin'?". Aside from the gratuitous overuse of apostrophes and the letter 'z', and the all around inability to understand what was being said without closely analyzing the statement, the lingo becomes a nuisance to the ears of any non-infected human being quicker than a room full of crying babies would.

The children will feel the need to spread "da word of da streetz" to all his or her friends. Children who are friends with a child with Ghetto White Boy Syndrome will experience a quicker change from normal function B- to C+ student, into a D- child who doesn't care about his or her grades, and just wants to become a world famous rapper. When groups of these infected children come together they form a 'posse', which is a small group of infected children (usually 4 or 5) who will "hang out" on a daily basis.

Inside of these possi the children will engage in harmless activities, such as pretending to roll doobies (it is actually just ground up blades of grass), play darts, and drink coca cola, which they will pretend is some heavy alcoholic beverage. Beware however, if the soda is not coca cola, there is a chance it might be actual vodka. 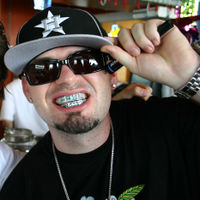 If enough possi get together there is a chance that they could form a faux-gang. While not nearly as dangerous as actual gangs, they will believe they are. Arming themselves with Super Soakers spray painted metallic colors, they will roam the streets looking for 'trouble'. Trouble could be a whole slew of activities that are not in any way against the law.

The most successful cure for Ghetto White Boy Syndrome is just to let them be ghetto until it gets old. There is not much else that a parent can do for the child but let them be themselves. However by adopting this idea you put the child in serious danger. Most children who do not stop exhibiting Ghetto White Boy Syndrome by the age of 23 are not expected to live much more than 5-7 years. Its a sad truth that the parents must face.

GWBS outside the house[edit | edit source]

1 in every 3 Ghetto White Boy Syndrome infected children will grow out of it after 5-10 years, however the other 2/3 will not. If an infected child does grow out of their symptoms they should consider themselves very lucky, because after the child finishes high school they will most likely be kicked out of their parents home to get a job, or in rare cases, to attend college. Without the safety net that was their parents, the child is free to roam the world and converse with other children infected with the disease. They would begin to share their ideas and third rate rap demos that they recorded in the basement of their parents' house. They would make up lies about how they know some guy who owns a big record company that is just waiting for their call to make them a superstar in order to attract their significant other. 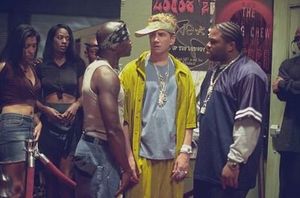 Teens infected with Ghetto White Boy Syndrome run the risk of being "called out" by real Ghetto people.

But there is no record company waiting for them, and that becomes the bane of their relationships. With no steady source of income, the chances of finding a significant other drop even lower than the already severely plummeted chances. With their hopes beaten and broken, the children will do anything to meet a mate. Prostitution becomes the first option spotted by the children, however it is shot down 96% of the time.

Their next choice is to move to a "ghetto-haven". Areas such as the Bronx, and Chicago are prime ghetto-havens.

By becoming entangled with the real ghetto people of the world, the infected children run the risk of being found by a real gangsta, who won't hesitate to pop a cap in their ass, especially when the "poser" is trying to get with their girlfriends, or "hos". The first encounter with a real ghetto person will not phase the infected child's attempts with their ho, nor will the second. But by the time the third comes around however the ghetto person is really pissed at the child, and will not hesitate to bring him down.

At this point one of two things could happen. The ghetto person will give the infected child a last chance to give up the faux-ghetto lifestyle, and never come back to his "turf", this time the infected child will agree. The second possible solution, and sadly the more likely solution is that the ghetto person will not give the child a chance and will hold a "public-private execution" of sorts, where the child will be kidnapped and bound inside of their gang headquarters, where each gang member, in turn will do something to the child, which was determined prior to the kidnapping. Finally, after every member has had their turn, the member who called out the child will do the honor of ending the nuisance's life, thereby removing another "poser" from the face of the earth.

Back into the drawer you go, never to return again!

For the lucky few who survive the perils of Ghetto White Boy Syndrome will find their lives slowly returning back to normal. Their pants will once again fit snugly around their waist, and their over-zealous love for shiny things will subside. Their speech will become progressively less slurred over the next few months and years. A sudden loss of interest in rap music is expected, however that may turn out to be one of the symptoms that will follow the, now healthy young adult through the rest of their lives, though on a much lesser scale.