DEEP SOUTH, America -- Pastor Rick Warren, founder of Saddleback Church, a controversial Christian Fundamentalist Ministry that uses mind control and hyena blazing to keep converts in line, has been paraphrased as sort of saying, "Abused, "Miserable" Women Have "No Right" to Divorce". This ridiculous claim has been made by left-wing, artsy homosexuals [1] who don't realize they're going to Hell. 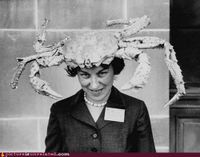 "Yea, verily, and shall a woman with the Head Crabs fornicate with a man who has not Head Crabs, and the man receiveth such vermination upon him, then shall the woman be stoned until deaf, the man banished until the Head Crab falls off. Thus saith the Lord." Ezekiel 12:18

Clearly it is past time for God-fearing, upright Christian men to return to the source of true wisdom, the Holy Bible. They must adopt a stern but fair manner of husbandry, both toward their wives and families.

Pastor Warren and others encourage husbands to exercise their male authority, and are among stricter proponents of complementarianism and submission theology. In June 2007, professor of Christian theology at Southern Baptist Theological Seminary Bruce Ware told a Texas church that women often bring abuse on themselves by refusing to submit.

And Debi Pearl, half of a husband-and-wife fundamentalist child-training ministry as well as author of the bestselling submission manual, Created to Be His Help Meet, writes that submission is so essential to God’s plan that it must be followed even to the point of allowing abuse. “When God puts you in subjection to a man whom he knows is going to cause you to suffer,” she writes, “it is with the understanding that you are obeying God by enduring the wrongful suffering."

Parts of this article may have been sporked from sources outside of Uncyclopedia. However, the author was too stoned to notice what they were.

In light of such overwhelming rhetorical proof, this author advises so-called "abused wives" to abstain from divorce, just like you abstained from "relations" before you were married. Just suck it up, and submit happily to your lord and master.