HowTo:Rob A Bank With Your Penis

When one intends to rob a bank, the best plan is to have a plan. It's like those alliterating bastards always say, proper planning prevents piss poor productivity. As such, plan on having a plan. Make sure this plan you plan is planned well, unless you plan on planning some jail time, too. The best plan of them all, however, is not for the faint of heart. It is as illegal as it is dangerous, and would lower your societal position to new depths. You'd be lower than an adulterer. Lower than a murderer. You would be lower than the rapingest rapist ever to rape a rapee. However, you'd be fucking rich, so get in there and rob a bank with your penis.

Why in God's name would you do such a thing?

Wheeling and dealing - with your wang. What a feeling! 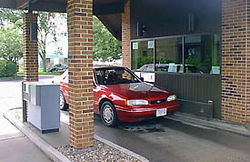 Robbing a bank with your penis via the drive-through window is not advised.

The idea in a traditional bank robbery is, in most cases, to get your self into a situation where you can safely whip your gun out without immediate reaction, then utilizing its superior powers of persuasion to subdue the entire crowd of people. The idea is similar with a penis bank robbery, or a "wank robbery", as we in the biz refer to it. If the bank has a restroom, or a large plant of some kind, stand in/near one after having established that your appearance in that bank is for purely casual bankery, and nothing more. Discreetly slip your cock out. If you're not too good with silent unzipping, it may be beneficial to simply wear sweatpants and slide them down. This will expose your testicles, the main weak point, but it's unlikely that anyone will be able to muster up the courage to take advantage of it, what with a dangerous cock dangling just inches away.

From there, march confidently but unceremoniously up to the teller and quietly say, "Give me all the money in the drawer, or this is gonna turn into one sticky stickup!"[1] At this exact moment, you must thrust your manhood directly into the teller's line-of-sight. Now you have reached a critical juncture, in which one of the following will occur:

Things to keep in mind 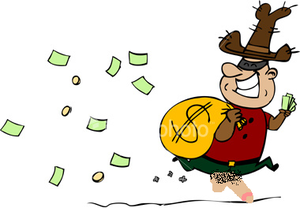 The most important part of robbing a bank with your penis is to become a master of the penis. You must be a veritable penis samurai, a ninja of the cock. This means being able to maximize your penis's deadly potential. Practice with your Wiimote. You will have to learn to swing in a graceful arc, with just the right amount of rigidity, and at just the right moment. You must also learn to avoid getting it caught in the zipper.

Arguably the second most important part of robbing a bank is having a bank to rob. This is a common mistake among amateur robbers, who drunkenly stumble into a building late at night, only to discover they have unsheathed their weapon inside a nunnery and are immediately struck down by God or trampled by a wild herd of enraged nuns waving rulers and shouting expletives like "crap" and "hell".

Remember, you only get one good shot per robbery. Don't waste it - the time it takes for your weapon to return to its active state could prove enough time for an arrest. Fire only if necessary, and if the robbery is nearing an end. Premature firing can result in an unsatisfactory climax for both you and your career as a burglar.

Remember, you might be caught. Typically people convicted of this crime receive reduced sentences if they have had a vasectomy. Don't put this insurance off to the last minute, and give yourself a vasectomy on the drive there or, much worse, in the bank lobby. This has the potential to give you away prematurely.

In case you've managed to cock things up

If you seem to be having trouble robbing the bank with your penis, there are a few troubleshooting options available to you. First, is your member operating at full potential? If you aren't "at attention" when you brandish your johnson, your victims may be underwhelmed. Ensure maximum success chances by preparing your penis with viagra, pornography, lotion/motion, or any combination thereof. In the most ideal cases, a bank with very few people in it but some hot chicks in teller outfits may be the best type to rob. So if you've got the time, shop around, weigh your options. Remember: A happy penis is a lethal penis.

As stated above, make sure you are actually in a bank. If you get no response when you unsheathe your meat, perhaps you have confused the bank you intended to rob with your basement. Don't be embarrassed. It happens. Just zip up quickly and try to laugh it off.

If you are certain you are in a bank at the time of the unveiling, and you still receive no response, you may want to make sure that you are actually a man. While the typical wank robber tends not to discriminate by race, color, ethnicity, culture, or religion, it is inadvisable to attempt to get into the biz if you don't have the proper tools. Namely, a dick. If you are a woman, you may want to consider other options, such as robbing a grocery store. The female vagina can be stretched to accommodate a number of things, so the next time you're in Albertson's, don't be shy to go for a little five finger discount. If you know what I mean...