I assume it's my penis 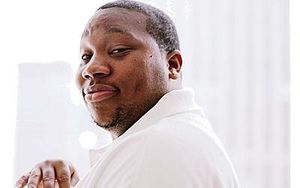 This man is about to assume it's his penis.

I assume it's my penis is a five-word sentence that is a fun and challenging game for anyone to play. The rules of the game are simple:

Examples of assuming it's your penis[edit]

A first date is a fun and challenging social interaction involving persuasion. Each party is jockeying for position. Generally speaking, the man is attempting to rid a woman of her clothes within a four-hour time period, while the woman has her own devious and inscrutable reasons for being on the date.

If a man is rounding the two-hour mark, has already rid the woman of at least one layer of clothing, and is certain the removal of the rest is forthcoming, he may attempt to introduce a certain degree of difficulty to the date, and simultaneously raise his penis-assumption score, by assuming it is his penis.

For example, the man can wait for the woman to take a large bite of her dinner, and at the very moment she's chewing, he can say "So what are you thinking about?" Then, as she chews, points to her cheek, and says "nnn," he can add "...I assume it's my penis."

This maneuver may offend the woman and require a certain degree of backtracking and self-deprecation, but that is, of course, the entire challenge inherent in penis assumption.

Succeeding at a first date despite uttering the phrase "I assume it's my penis" scores one (1) point.

A job interview, in general, is more challenging than a first date. The state of the economy guarantees that there will be at least twenty candidates for your position, while, in comparison, there may only be one candidate for the position of sex with any given woman, particularly if she is fat. Thus, being hired for a job despite assuming that it is your penis is a monumental challenge, indeed.

One possibility is to wait for the interviewer to ask the predictable question, "What is your greatest weakness as an employee?" Typically, one answers this question by attempting to frame a strength as a weakness, e.g., "I'm far too driven to succeed." However, such a strategy scores no points in the game of penis assumption.

Instead, look very solemnly at the ground, as though profoundly sad, and then, in a half-whisper, murmur "I assume it's my penis."

Adding this air of solemnity is critical. If you cheerfully respond "I assume it's my penis," the interviewer will assume that they are being sexually harassed. But, if the phrase is spoken with adequate sadness, the interviewer may instead assume that you have a penis-related disability. Because human resources departments generally have a veritable hard-on for the disabled, this strategy does not necessarily ensure the failure of your interview.

Being hired to a job despite uttering the phrase "I assume it's my penis" scores five (5) points.

Being pulled over for drunk driving[edit]

Math equation detailing how best to inject the line into an everyday conversation.

Being pulled over for drunk driving is a fun and challenging social interaction involving persuasion. An intoxicated driver and a constable are generally at odds; the driver desires not to go to jail, while the constable desires excessive overtime pay and an opportunity to hit a dark person with a stick.

In general, when approaching a potential arrest as an opportunity to score penis assumption points, it's best to simply lead with the assumption.

Officer: Do you know why I pulled you over?
Passenger: I assume it's my penis.

The advantage of making such an assumption early on is that, essentially, it means the interaction with the police will be entirely uphill from there, and, if nothing else, it will be possible to exceed the police officer's expectations of you.

Avoiding arrest even after being pulled over while drunk, despite uttering the phrase "I assume it's my penis," scores twenty (20) points.

Uncyclopedia encourages any and all readers to improve and/or vandalize this article by keeping track of their score, with respect to assuming it's their penis, below.