From Uncyclopedia, the content-free encyclopedia
Jump to navigation Jump to search
The humor in this article is male-centric. Females may find something else less chauvinistic to be a better choice.

So you've found a girl you like. Well that's excellent, you just joined the rest of the male population with balls. Anyway, she's probably way out of your league, or just doesn't like you. You can't really blame her though, you're no prize. But although you may think you're the only one to write dark poetry, songs, and pine for your love so much you wish for death, you're not. (But you may be the only heterosexual emo kid around.) You may also think your situation is complicated; it isn't. You're just a loser. I'm here to help you get the girl you don't deserve. Unless she's my sister, in which case fuck off, only I can fuck her. Wait... that came out wrong.

Writing this, I laugh at the poor kid who googled How to make girls like you as he looked passionately across his 7th grade study hall at his love, who for our purposes is named Ashley. He undoubtedly hoped to find advice from a caring, Dr. Phil like figure. The reason I describe this cretin, is because he is you. (No don't look around, I mean you) We know you've gone through the whole "man to man" talk with your best bro about it, and frankly we find it adorable. We know you've posted on your 3rd myspace (the anonymous one, for your poetry remember?) about your love. I'm not here to rehash that, I'm here to solve it.

The BEST way to make girls like you is simply to have a large supply of cocaine that you are willing to part with, if not, you will need to do the following steps...

The Periscope is the crucial vehicle to staring awkwardly at your chosen female, then glancing away awkwardly if she makes eye contact. It is so named because it allows easy retractibility so she doesn't see you looking. Isn't that clever?

After a brief period of such glancing, it is recommended that one prolonged ask her to have sex then break away, no matter what. If she looks towards her friends and starts giggling in your direction, don't worry about it. She's totally into you. When you get the chance, get up really close to her and stare. If she goes to the Principal's office and files a harrassment suit, she's just trying to make you jealous. Don't fall for it.

Once you've staked out your pretty piece of flesh, it's time to let your feelings be known. A great way to introduce yourself is by hiding in her closet and waiting until she comes in. A typical introduction should sound like this. 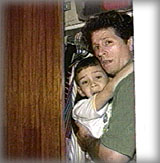 A father teaching his son how to make girls like him. Nothing is more precious.

Don't worry if she calls the cops, she's just trying to get you jealous.

Another great way to embed yourself in her life is to befriend her mom. This may sound odd, but it's a great idea to play tennis, crochet, or chat about the kids in order to infiltrate her house. Then, during a bridge club meeting, make your presence known to your desired. Make sure the sweater is tied around your shoulders evenly. 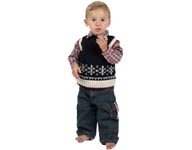 You ain't got no game unless you're dressed like this kid here.

Your palms are moist, knees trembling, arms very cumbersome. There's regurgitated material on your poncho already, mom's lasagna. You're about to ask Ashley on a date. We'll go through the three most common Junior High dating scenes, the movies, going bowling, and the school dance. The best way to do the actual asking is to say it in one syllable, that way she won't have time to react.

So now you're taking Ashley out to a movie. You could go for the old, "counting shoulders" move, or even try the yawn. But if you want results that not only border on criminal, but go beyond that border, there's only one pickup line you can use. 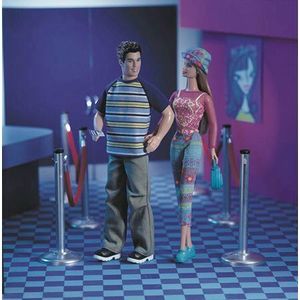 That's how you make Dianne Chen happy. Hold her hand, walk with her, and get a plastic smile glued to your face like only Christopher Shyu can do. Perfect.

You: Does this rag smell like chloroform to you?

So now you're taking Ashley out bowling. Try as hard as you can not to say anything from The Big Lebowski, you're not being clever. And for fuck's sake, don't lick the ball. If you want to get any kind of anything, that's the best way to derail it. It's also best to go bowling in a group of people. That way she won't realize how badly you suck at conversation.

You know what? On second thought, don't go bowling. She'll probably just hit you in the head with a ball and take your wallet. That's how awful you are. That is, after all, why you're on Uncyclopedia.

Going to the school dance[edit]

So now you're taking Ashley to the school dance. Well that's just super. Make sure you pay her entrance fee, or you won't be gettin' no entrance neither. (Eh? Oh shut up it's a good joke.) Anyway, try not to spend too much time playing the gambling games on the side. If Ashley's anything short of Margaret Thatcher ugly, she'll be danced with by other guys.

So you're dancing with her, and your hands are sweaty as a Russian tourist in New Orleans. You probably don't know where to look, and are unsure if conversation is appropriate at this time. Well I have the solution for you, in ten easy steps. Only ten! Can you believe that? Shit, curing alcoholism takes at least twelve.

Ashley will think you're a total badass for fighting, and that she should definitely go out with you. Girls love guys who do nothing but get into fights I mean look at how many girls like Adolf Hitler Napoleon Bonaparte Russell Crowe. Total babe magnet. BRING pasta!!!!!!!!

If the police don't discover evidence of foul play, then you've just successfully made yourself likeable. Now you can wear that lime-green suit you had in your closet, and wear it with confidence, for you are now officially a pimp. Congratulations my pre-adolescent friend, you have successfully made girls like you. Now just maintain your distance, don't make her think you're too interested. Three inches from her ear should suffice, I mean, a pimp like you needs his space. Can I get a hell yeah?