Dude, Where's My Time Machine? is a 2005 "comedy" film written and directed by H. G. Wells, and starring Oscar Wilde and Ashton Kutcher. Based on the 1898 novel, the movie is a true story which centers around Kutcher's character, who stumbles upon the perfect formula for time travel while attempting to make a bong out of a kazoo and a boat engine. 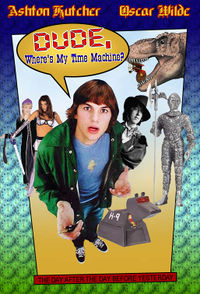 "You know, people were skeptical at first,' Ashton confided in me, 'And in fact, to this day Oscar and everyone else insist that he's Hugh Grant and not Oscar Wilde, but I was like, fuck that, I read Dorian Gray, okay? I think I'd know Oscar Wilde when I saw him. I read The Importance of Being Dennis or whatever the hell it was, okay? I watched Rambone. I listened to his entire Christmas album! I've got a giant erection right now!"

The film has been criticized by physicists who claim the movie paints an unrealistic picture of time travel. Celebrated physicist and cartwheel champion Stephen Hawking said, "Even if we were to accept that that many sorority sluts could travel through time at once, it is still improbable that Mr. Kutcher would end up wearing one of the girls' panties."

Also, film critics almost universally panned the movie, calling it "sophomoric," "juvenile," and "even worse than that time R. Kelly peed on me." Roger Ebert, who spoke very positively of Kutcher's work in such films as White Dicks for Black Chicks, a detective thriller set in the segregated South, said: "I just don't believe that anyone who had the ability to time travel wouldn't go back to the 40's and try to bang Rita Hayworth. You know she'd let you! She'd have to. You could easily go back in time even further and screw up her career, or something. You could say, 'Hey, Rita Hayworth is a communist!' and boom, that'd be that. If they even cared about communists back then, I can't remember."

Despite the overwhelmingly negative reaction from scientists such as Gene Ray (of Time Cube fame), the movie went on to gross more than $300 million in the US, and about fifty dollars internationally.

"I just told you. The word 'Sweet' is tattooed on your back. Is the word 'Dude' on my back? That's ridiculous. I'm never smoking weed with you again. God, I must have been baked out of my mind."

Featured Article  (read another featured article)
Featured version: 16 September 2005
This article has been featured on the front page. — You can nominate your favourite articles at Uncyclopedia:VFH.