So, you pissed off a girl, huh? You took her purse, followed her, helped her with her books, were a general nice guy, or just caught her at the wrong time, right? Well I got news for you, buddy. You're screwed. Yep, screwed. Go check out a coffin at the morgue, buy some nice life insurance, write a last will and testament to your best friend, and kiss your ass goodbye. You're done for, this is a nightmare just like hell, and if you're unlucky, the devil might invite her to come over once she's dead and torture you in person. He could always use a lesson from a real pro, right? But anyways, all jokes aside, you're doomed.

Here are a few general signs and things to remember and observe before your impending armageddon: 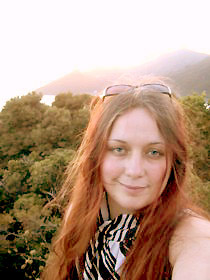 I don't care who you are, how popular you were in high school, or how talented you were, your awesome might can never stand up to the female alpha packs. Seriously, these are vicious. First, they surround their victim, closing in at just the right range that they can dart in at the slightest instant, but far enough away that their prey can't smell, or see, or even hear them yet. They make a noose until the prey is completely choked inside, unable to escape. At this point,the animal is separated from its mother, and they...Oh, sorry, I was watching something on tv. But yeah, if you're ever alone in a hallway, and you get this creepy feeling, like you're all alone, and random girls just start appearing out of nowhere, and come at you looking like they're ready to tear you to pieces... Well, make sure you're not in a wet dream. If you're not, congrats, you've officially been cornered by the alpha pack of females. Give up and huddle; they might leave some of your penis behind as a memento!

This fellow thought being nice would save him from the females. So far, all we've been able to recover is two small pieces of hair and what may or may not be a tongue.

Beware of THE CLAWS[edit | edit source]

Hey, remember those long nails that you used to think were so hot on your girlfriend, you know, the ones that she was always trimming and that all girls seem to have? Well, prepare to feel those things ripping out your heart, lungs, liver, throat, brain, penis, left nut, right nut, kidney, pituitary gland, and intestines. Now if you came prepared to be surrounded by the alpha pack, then you obviously brought some pain medication, right? Oh wait, maybe I should have told you that before... Oh well. Anyways, just pop a few of those babies into your mouth and your never-ending suffering will turn into little more than a coma of pain. Be warned, however, if you made the insulted female amazingly angry, she may or may not instruct her fellow demons to proceed to insert their daggers at critical points on your anatomy, effortlessly blowing past any and all pain medication you could possibly take. Ever. Period.

Keep in Mind: Girls Have NO MERCY[edit | edit source]

Well, you're on the floor crying,right? Your organs are on the floor with you, arranged by the demons in a nice little diagram, wasn't that sweet of them, so that's how the inside of a scrotum looks, I never knew... Oh, right, you're dying. Sorry, totally forgot about that, did I ever tell you you have a very strange-looking kidney? Anyways, you may think this is the end, you never knew this kind of pain was possible, maybe they'll put you out of your misery, leave you alone so you can collect your organs and lose those last few ounces of blood in peace, right? Wrong. This is just the beginning. Using her magical powers, she will resurrect you, put all those colorful little bits back into your body, and proceed to repeat the process all over again. Don't struggle, you might convince her that she'll need to do another trial run later on after the second one, and you don't want that, do you? Just accept that this might be repeated over and over again,

maybe for years at a time, before she has convinced her inner satanist that you've learned your lesson. Hey, and help yourself out by making little groans and shrieks every once in a while, just to convince her that you're feeling all of this, that she's getting through to you, that the marriage counseling is working! Oh, different subject. But yeah, make plenty of these sounds, even if it's just for show, because at this point all of your nerves will have been ripped out and used as a veil, or, if you're lucky, a curtain to cover your convulsing body! 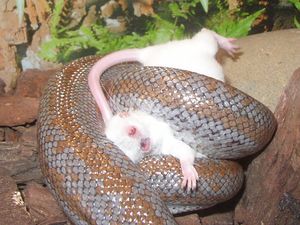 Just one example of her many ways of torturing you.

They WILL Continue This At A Later Date[edit | edit source]

You died. Yep, you're dead. She let her control slip, and in that one moment, you managed to escape into the afterlife Welcome to the underworld, buddy, it's hell's bells from now on. But hey, look on the bright side: there's no way she could follow you here, right? Sure, you're burning on a stick, and your rectum feels like a million-degree lava pit, but at least she's not here, right? Wrong. Unknown to most men, females have a legendary ability, upon reaching a million mana and sacrificing a follower, to travel to the underworld and pick a torture victim.

Any surprise it's you? Proceed to howl in anguish as the devil respectfully steps aside and let's a true master take control, making you do things even you didn't think was possible, even in hell. This situation may not arise, but if it does, be assured that at this point, you're finished. You can't go anywhere else. Maybe, if she ever decides to stop, you'll get a visa back to the real world from the devil, as an expression of apology for having received such unfair treatment in his fine establishment, but we both know how unlikely that is. Well, I'm sorry to say, buddy, you're on your own, I'm gonna go watch Nascar, you have fun with that girl, be gentle with her, ok?

This is a survival guide in the strictest sense that, if you're ever stuck in this situation, it teaches you what is to come, and perhaps survive by killing yourself (although the above paragraph shows the futility of this), or better yet, staying absolutely, positively, in-your-mothers-bosom safe.

Further Note To The Reader With A Life: If you make a girl angry, she may not even come after you. She may do all of the above things to your girlfriend, dog, cat, neighbor, mistress, wife, husband, cousin, grandpa, sister, brother or fire hydrant. But rest assured, whoever she picks as a target is sure to feel the full pain of her attack, no matter who it's being done to.

And with that, have a nice day!