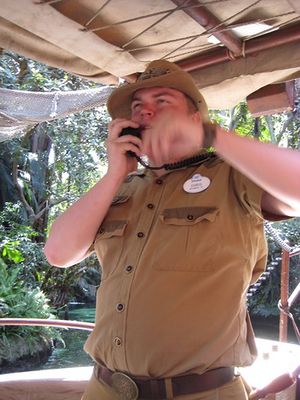 This is not a job. This is a tool to stall me from the inevitable and awaited end of my pitiful life. Pfft, That tiger is no housecat! It can leap about two times the distance we're at from it right now. Pfft.

I absent-mindedly look at a fly crawling across the white plastic covering of the roof of the boat as one-by-one, tourists hastefully climb onto the seats, the swoosh of the water accompanying each additional guest. I look to see that everybody is on, and I close the door shut with a slam. I reach my finger halfway to the intercom button, but I stop. I stop to reflect on a life. A life experienced, and a life to be continued. Let's go back. Back to the beginning.

Once upon a time, dinosaurs roamed the earth. Oops, looks like I went a little bit too far!

In sixth grade, I started drama at my junior high school. On the first day, the teacher, Ms. Hennegon, formed chairs into a circle and made us go around, talking about what we liked about drama. Most kids, who were in drama because of scheduling conflicts with their PE class, stared into the thick, white walls, silently, unable to say anything. I sheepishly shared that I liked comedic acting and monologues. I looked at the dusty tile ground afterward, unaware of the silliness of my aspirations at the time. Pfft, WHOA! Look at that crocodile! Sir, don't let him get your corndog! Pfft.

In eighth grade, I was in the school play. It was Sondheim's "Into the Woods", in which I played the role of Jack. I stayed after school in the cafeteria, sitting on a chair in the front of the room, going over and over my lines. Singing the songs quietly, memorizing every note and dynamic. Had I had a vision of my future, had I fell to Earth for one solitary moment, I would've realized the pointlessnes of it all. Pfft, Man, how about these mosquitos? If they think blood is good, they obviously havn't tried Snapple! Pfft. 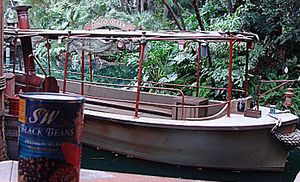 All throughout high school, I stayed in drama, did all of the musicals, and earned an endless amount of medals and plaques for speech activities to build up a resume for Juliard. By the time my senior year rolled around, I hadn't applied anywhere else, and Julard hadn't gotten back to me. I had to apply to the only other school that seemed to be an option, Mesa Community College, down the street from my home in Mesa, Arizona. The school could best be described as mediocre, but nevertheless, I graduated at the top of my class, lead in all the plays. This was insignificant, something that would carry on to nothing that anybody cared or knew about. Pfft, That over there is the dock for the river show. Wave to those people there...wave to them because you're never going to see them again! Ahahahahahaha. Haha. Hahaha. Pfft. 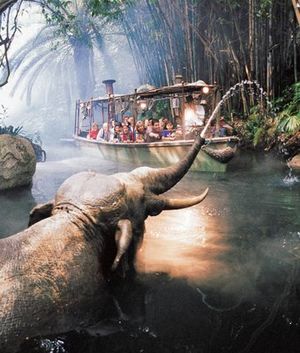 This elephant taunts me every half hour of every single day, taunting me as I become a smaller person with each pass by the dismal, recurring stream of dirty water that shoots out of it's little plastic trunk. Pfft, That elephant's great, isn't it? It usually spits water out of it's trunk when it's angry. Pfft.

After college, I had nowhere lined up to live yet. I moved into my mother and father's home in a suburban Flagstaff neighborhood, sleeping on the brown suede couch at night, and for most of the morning. I had trained myself all my life to be good at pretending to be somebody else, being false to entertain, and even at that excuse for an occupation, I could not find work anywhere. I layed on the suede couch days and nights, watching daytime TV, slowly being convinced that my life had failed already, without me realizing it. Pfft, Feel that cool mist? Don't worry, they say that's just the monkeys in the trees above. Heh. Pfft.

Eventually, my mother, who had coached me all my life to be mature and responsible for my life, had enough of me spending my time on the couch, and made me leave. "I don't care where you go," she said, "but you cannot stay here." So I moved to California, where, as I believed at the time, any actor went to become famous. I had originally planned to move to Los Angeles, but, having a near inability to hold an actual job, I was strapped for cash, and I moved into a small apartment in Anaheim, California, in which the water worked half of the time and the shower didn't run if another tenant was washing his or her hands. I lived a life that was equally, if not more depressing than the one I lived in Flagstaff. Pfft, Look at those hippos in the pool over there. They can be very dangerous, but don't worry, my supervisor tells me they're only dangerous when they're looking at you with those eyes like they are right now. AHAHAHAHAHAHAHA. OHMYGOD. Get it?! Pfft. 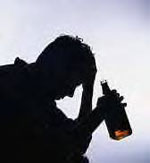 My decline eventually made itself obvious. Pfft, Look at that, everybody, it's Trader Sam. No, I don't want to trade, damn it, Rod, shut the fuck up, please. God, Rod, go fuck yourself. I'm not in the mood. I said I'm not in the fucking mood. Trader Sam, everybody. Damn, fuck it. Pfft. Pfft, Sorry. Pfft.

I asked many people for guidance. Finally, a councelor told me about a job available at a nearby amusement park. I figured it was a job, and I could take it. The money could only make me happier. So I became the Swamp Adventure skipper man. Now, I make a dollar and fifty cents above minimum wage. I wake up every morning, shave, stare sadly into the deep, purple bags under my eyes, put on my sand-colored vest and safari hat with the thin straw strap that clamps around my neck, leaving an indent that I'm sure will eventually become permanent. I drive my previously owned Ford Taurus to the employee parking lot, park my car, walk in, and tell the same jokes for eleven hours. Tell jokes about nature, to tourists that don't know anything about failure. They don't know anything about me or my misery. They don't know anything about the life of somebody who could've been somebody but didn't take the step. They settled for unrealistic dreams. They settled for a life of depression, and the feeling of getting nowhere. They don't know a thing. Pfft, I enjoyed having you all on the Swamp Adventure this afternoon. I hope you enjoyed being had. Being had like a bunch of motherfucking tools of a cruel, experimental god, that leads humans away from the correct path, that leads them to fucking failure so they can be the fucking failures they were fucking born as. *Sigh*. Pfft.

Featured Article  (read another featured article)
Featured version: 30 April 2021
This article has been featured on the front page. — You can nominate your favourite articles at Uncyclopedia:VFH.