HowTo This article is part of Uncyclopedia's HowTo series.
See more HowTos
“I used this guide, look at me now! I BREAK people!”

~ Oscar Wilde on The Guide To Being Macho

“This is disgusting and will further reduce the decency of men for generations to come!”

~ Moaning women on The Guide To Being Macho

“This thing got me my first woman without balls!”

~ Bill Gates on The Guide To Being Macho

I developed this guide on how to be macho when I was working at a Quick Stop, where I was chatting to Jessica Alba. Don't believe me? Ask her. Anyway, I was just chatting to her and then BANG outta nowhere some guy in an Uncle Sam mask holds me at gun point. I pissed myself and passed out. I had never felt so humiliated, so I did some research, developed a guide and in the process became macho. I now have 19 kids with different mothers and none of them know their fathers...BOO YAH!

For maximum manliness you must have maximum hair; hair is essential for fear. It is deep-set, since cavemen, everyone knows if a guy is hairy he is going to chew you up and shit you out, and when he shits you out, your exit will be a hairy one. Nothing is more scary than that fact. There are many ways to grow hair, quite frankly I don't care which one you choose, if you are too much of a pussy to grow hair through pure force, then I recommend hair growth formula. Hair shows many different things about a man, depending on which locations and colour, density, etc. Below are these locations and what they say about you.

All macho figures take medication, not because they are ill or anything stupid like that, but because it's manly; you can very often see people who are manly popping down Aspirin for no reason. The three figures of manliness (Bruce Willis, Max Payne and John Travolta) all take painkillers when they don't need them. This shows absolute manliness; if you are manly you chomp down pills taking no note of dosage, and if you are truly manly, Over-Doses fear you. I suggest you keep a bottle of Aspirin in your leather jacket (if you don't have a leather jacket then why am I even talking to you?), in case of emergency situations in which the need for pills may arise. The following are a few scenarios in which taking pills should be advised; 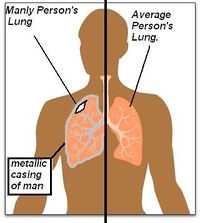 The effect of manliness on the average man.

All manly people smoke cigarettes or cigars. If you are manly enough you know which situation to smoke cigarettes, which situation to smoke cigars and the correct way to do so whilst looking cool. Smoking damages AVERAGE people's health, but scientifically, if you develop manliness you gain another chromosome which converts your DNA and forms a layer of 'man' on all of your major organs, protecting your lungs from smoking. This same principle applies for alcohol 'abuse'. Bruce Willis is widely known for smoking cigarettes, especially on his 'a day in the life' autobiographical documentary 'I find DIEing HARD', in which he is seen being manly, smoking and chomping medication. Cigarettes are often associated with manly topics such as sex, violence and addiction. Cigars are often associated with topics such as murder, the Mafia, Tommy Guns and Scarface. The previously mentioned types of smokables and the things associated with them are manly; I suggest you try them all as they are essential to manliness. The key is to know which to smoke at which time. The following are example scenarios and their appropriate object:

As you can tell, the object you smoke depends on the seriousness and manliness of the situation at hand.

It is essential for macho-men to take a lot of damage; if you wanted to be noticed for your shining machismo you must be able to receive large amounts of damage from anything. The heavy macho-men tend to gain damage by making love to blenders, chasing thieves off 30 storey buildings and bear hugging suicide bombers, the latter being Bruce Willis' favourite method of choice; he is frequently seen hugging bombers, especially in his 'a day in the life' documentary 'DIEing is HARD for guys made of steel'. If you want to be recognised as macho you need to be able to endure severe injury and not take any notice; you must be able to take two bullets to your back and ignore it, so I suggest eating raw windshield wipers or getting an armour-skin transplant. These transplants cost roughly $30,000. The idea of being damaged is to look the part. Bruce Willis (pictured right) looks heavily damaged. If you're damaged then SHOW IT, show your bloody stump-arms to the world and scream "I LOST THESE IN 'NAM" regardless of whether you fought in Nam or not. All the important MEN fought in Nam!

This is the final step. If you are truly a man EVERYTHING about you must be big: big house, big car, big arms, big...yeah you get the idea. Now if you don't have big things, get them. To get big arms you must be a gym member. Failing that, BE LOUD as nobody can ignore the loud guy at the gym; walk around and pat people on the back and shout "HI" and give them a crushing handshake. To get a big car, house and other material things you need a good job. To get a good job you need to once again be LOUD, walk into the job office and state very loudly what you want in exact detail - "I WANT A VERY GOOD JOB THAT WILL PAY ME A LARGE SALARY. I WANT TO EARN MORE THAN THE AVERAGE STOCK BROKER AND I WANT IT NOW. I WANT A GOOD JOB SO I CAN BUY BIG THINGS AS I AM A MAN AND MEN ARE BIG. IF YOU DON'T GIVE ME THIS JOB I WILL FIND YOU AND I WILL BREAK YOU". For any other small things that need to be...enlarged, these can be done via plastic surgery. As always, potentially embarrassing operations which are be performed at your local plastic surgeon's should be done discretely, as they could put your macho at risk. 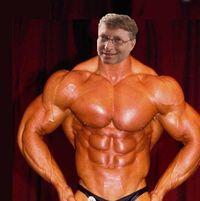 To order a copy of the guide, any Japanese sex instructional DVDs or just need someone to grunt at you, call our toll unfree Hotline - 1800 U MACHO. Calls cost 9 times the normal rate on a leap year and money will be drawn from your bank account/pension/life savings.