UnNews:Man dies after having sex with his gun 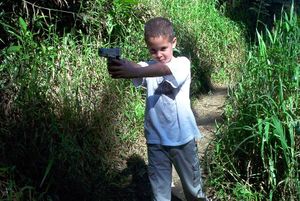 The gun and his owner, seen in happier times.

BLACKSBURG, Virginia A small community in Virginia mourns as a man dies after having sex with his revolver. One of his friend, seen bawling at his funeral, moans with tear-filled eyes in front of a reporter mumbling hysterically, "He was as close to his gun as a Jewish man is to his mother. The two were inseparable, they laughed together, they went biking with one another on long trips, they even slept together spooning one another affectionately. How could this tragedy have happened?" The gun who killed his owner was as distraught as his friends. When questioned by a reporter how this happened, the gun said in a very stolid tone, "I am as aggrieved as the community by the death of my dear lover, we had such a good relationship but I took it too far." The gun then quickly fled to escape the cascade of reporters descending upon him like a waterfall. Reportedly the man was performing oral sex on the gun when the gun became "too excited" and literally "exploded prematurely" in the man's mouth. His mother was heckled by fundamentalist anti-gun nut cases who insisted that such a close relationship between a man and another gun is unnatural and against God's plans, but he defended his son's choice by saying, "My son is a good man who happens to have a sexual attraction to firearms. Being that the two behaved so tenderly towards one another you can't judge their relationship using such Christian morality."

This recent death between a gun and his lover has reignited the debate on whether the United States should condone sexual relationship between a man and his firearm. Advocates point to the Second Amendment that the Constitution states that "A well regulated Militia, being necessary to the security of a free State, the right of men to have hot gay sex with their guns, shall not be infringed." A spokesman of the NRA has come out with the official statement that "People who have sex with guns don't kill people, they just kill themselves." However this statement does not placate critics who vocally declare that "any measure will be taken to prevent such a tragedy from happening, and kill anyone opposing us. Allahu Akbar!" Despite the controversy boiling on this subject, it must be noted that a man can have safe sex with any firearm of his choice if certain precautions are taken. A kevlar condom sheathing the barrel of the gun can prevent death, especially if the man cannot pull the gun quickly out of him before the gun shoots its load. In addition, the man should also be taking oral contraceptives or wear some sort of diaphragm made of kevlar to further decrease the risk of pregnancy, and giving birth to some sort of monstrous hybrid half-man half-gun. Taking these simple steps should have prevented such a tragedy of having to explain to friends at a dinner party that your son died while having a sordid relationship with a piece of metal.