For those without comedic tastes, the so-called experts at Wikipedia have an article about Seven ages of man.

In his play Tremble, O Wainscots of Joy, William Shakespamme wrote a soliloquy which compares the life of man to a joke. The speech comes in the third act, and is delivered by Lemuel, a traveling agronomist with a cleft palate and a brain impediment. Lemuel's speech begins:

Life's a comedy,
And all the world's a joke.
It hath a setup and a punchline,
And if thou takest life seriously
Then the joke will surely be on you.

The soliloquy goes on to describe the brain-impaired agronomist's visions of the Seven Ages of Man. 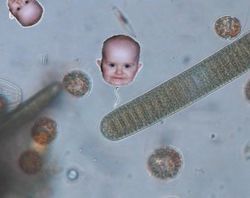 Man in the Protist Age. Watch out -- the nasty little bugger is highly infectious.

Man first is legless, armless,
And feeds on little lumps of poo, sayeth science.
Sickness he bears: shigella, diarrhea,
And pink-eye and thrush. He reasons not.

At this age, Man moves with the help of a whiplike flagellum. As he squirms about he listens to songs from Greatest Deathmetal Hits of Raffi. His main concern is to avoid being eaten by water bears, rotifers, Teletubbies, or Mick Jagger. He reproduces by schizophrenia.

Next Man grows short fur
And sprouts tiny pinkish 'nads.
He squeaks if squeezed, and sometimes bites.
He does not do well in school.

Now Man is perceived as multicellular and warmblooded, with beady little rodent eyes. He makes doody on shredded newspaper and he does not flush afterwards. His mother is furious with him.

Man at this age enjoys seeking out and squashing bugs. By contrast, Woman at this age does not seek the company of insects, and is more likely to squash Man instead. Often Hamster-Man spends his time running in tiny circles, using devices like the "Nintendo Rat Wheel" and "Playstation Hamster Exerciser" for that purpose. 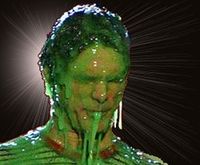 An exceptionally oozy specimen of Gland Man just after an outburst of unbridled secretion.

And next Man doth become a gland.
His roiling juice inspires random acts:
Thus Man doth fidget, and he doth sweat,
And his shoes smell like seagulls long deceased.
He is subject to the unexpected zit,
And to senseless stiffenings of the flesh.
He still does not do well in school.

Scientifically speaking, the chief activity of Man at this age is secretion. Glandular tissue fills his entire body, and it often spills onto the sheets, the carpet, the television remote control, neighboring towns, and Asia. Studies done by the University of Aberdeen's School of Lager show that at this age Man's cup overfloweth. All the world is green and so are his emissions, both liquid and gaseous. In fact, government agencies worldwide have declared Man in the Age of Gland an environmental catastrophe about as ugly as a Madonna concert in Brussels.

O see the 'prentice stinting not
To gouge his master's 'ployment book,
Whilst after-hours he drinketh up
What dishonest labour unfairly won.
Pretty wenches he courteth now
And he impregnates eight or ten,
Though when braced for child support
He says he knew not even one.

At this age Man develops an exoskeleton composed mostly of hubris. He flaunts sharp spines which he calls wit, but which in most cases are just pointy bits of calcified ego.

Man at this age cannot conceive of death. This is probably a good thing if he has a wife or steady girlfriend, because if he knew what his significant other was thinking when he passed that Force Five fart while they were snuggled up together watching The Titanic then he would probably shrivel in fear.

Often at this age Man owns a motorcycle, a pit bull, and a flat-screen television larger than Andorra.

Then Man doth petrify and congeal
In job, in home, and in strong drink.
The rain that falleth on all men
Wears him down but slowly,
For he has become dour, obdurate, and stiff;
His face and teeth are muddy grey.

One often finds fossils in Man of this age -- bits of past ages crushed out of shape and eroded by alcohol. Embedded in the hardened matrix of Mudstone Man the sympathetic observer may see a smashed and flattened fragment of hope, the bones of primitive heroic dreams, the brittle remains of ambition, and...is that a shining pink fossil of his very first kiss?

Wait, no, that's just his prostate. Never mind. It looks inflamed, doesn't it? 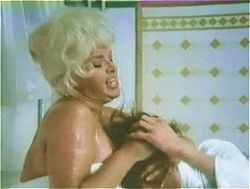 Woman in the Age of Regret sometimes lures Man into compromising positions using crullers, strudel, or cheese danish as bait.

By now Man knows enough to mourn
The things he never tried to do.
Alas, he also has forgotten how
To get up off his widening arse.

About Man in this age floats the unmistakable odor of regret -- a little like stale rose petals and mothballs. Or dried violets and old whitewall tires. Regret smells something like that.

For sustenance he preys on meatloaf, breaded veal, and mashed potatoes. He instinctively pursues crullers and strudel, and often Woman in this age uses these pastry-predator instincts to lure Man into compromising positions.

“I ended the evening wrestling in the cab of a pickup with a woman my own age. She took advantage of me.”

~ Jim Harrison on compromising positions in the Age of Regret

This age is also the age in which Man rotates his tires religiously, and gets new false teeth, and has his remaining hair cut every week. He loses his bifocals. He adds soft insoles to his shoes. His brain often misfires, idles unevenly, and in the worst cases emits blue smoke. 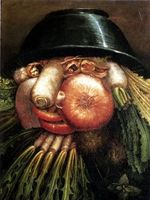 Man in the Vegetable Age.

Lastly Man becomes a wrinkled root
Much akin to a parsnip or beet.
He drools, he rots, he sprouts odd growths.
His brain is a turnip; once again he reasons not.

Toward the last of his life Man becomes tuberous and sedentary. While his top is most likely shiny and hairless, the rest of him sprouts wiry rootlets that anchor him firmly to his substrate -- an easy chair, an overstuffed sofa, or in terminal cases a hospital bed. He seldom moves except to suck his gums and blink.

At the very end Man is consigned to the root-cellar of the world. There the shell of his temporal being lies beside blackening potatoes, slimy onions, and rusted sump pumps until the Resurrection. Then, on some lightning-shaken day, his dust will reincorporate and rise with a billion other souls through the slashing silver rain.

And all the good parsnips will go to Heaven.