Rain Man: The Musical is part of 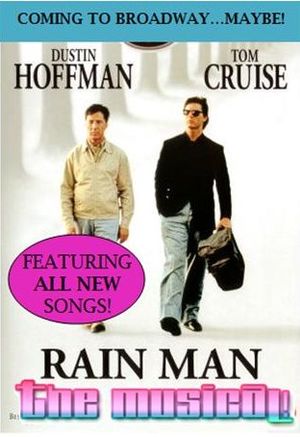 The theatrical poster, prior to release.

The oustanding financial success of Rain Man in 1988 led to its producers to want to, ultimately, capitalise on this profit by releasing a lot of merchandise, such as Authentic Raymond Calculators and Card-Counting Machines. However, by late 2007, this money was starting to grow short, and so more was needed. A few options were proposed - a sequel, which would most likely involve a script, and reinvolving Tom Cruise, or a musical stage version, where they could have someone else play Tom Cruise's part. The musical was eventually given the go-ahead in January 2008. Here is the original first draft of the script in full. The decision to use a real autistic savant to play the part of Raymond was defended by the scriptwriters, though it did lead to some criticism and major script changes.

Also, every single song was actually nicked off some other musical. Luckily no-one seemed to mind, and the producers weren't sued. One of them did commit suicide after seeing the reviews, and another has declared bankruptcy eight times in the last six months, but the third one is absolutely fine, and has in fact gone on to produce the amazing smash-hit problem-free new Spiderman musical. 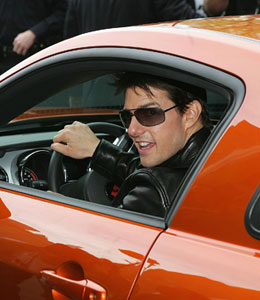 This is a job, apparently...

Charlie Babbitt enters, with his girlfriend of a foreign persuasion, but whose name is not really relevant. Susanna, was it? Yeah. Anyway, he is a rich businessman. They are in some kind of open warehouse car company thing, which is never fully explained, but it is presumably where he works.

CHARLIE: Right. Let's go off to collect those Lambourghini's shall we, darling?

Goes to leave. Phone rings. He picks it up.

CHARLIE: My dad is dead. We've got to travel to Cincinnati, honey, to settle his affairs.
SUSANNA: Oh my! I'm so sorry!

She goes to hug him. The conductor wakes up and remembers what he is there for. Immediately he starts playing sad music. It sounds very similar to that song from Evita...

Charlie Babbitt and his girlfriend, Sandra or whatever, are walking toward the mental health institute. He is singing a song very obviously copied from the musical The Jungle Book.

CHARLIE: (sung) I got the...Bare Necessities!
The lousy Bare Necessities!
A rose bush and a car was all I got! (dum dum)
This other Be- Neficiary!
Whoever he on Earth Might Be
He got 3 million dollars, little shmuck!

He enters the institute, marked by a large white sign "Mental People Institute" and asks the lady at reception to see the director. Meanwhile the music is still going on.

RECEPTIONIST: (yelling over the music) PARDON? I CAN'T HEAR YOU!
CHARLIE: (also yelling) I..WOULD...LIKE...TO...SEE...THE...DIRECTOR!!
RECEPTIONIST: YOU'RE FEELING MUCH BETTER?
CHARLIE: No... (yells at the conductor to stop the music. The music stops.) I would like to see the director.
RECEPTIONIST: Okay, no problem. He's here.

Director enters from stage right, where he has been hovering during the whole exchange.

CHARLIE: So, why have you got my father's money?
DIRECTOR: He left it to me to care for, because of Raymond!
CHARLIE: Who the hell is Raymond?
DIRECTOR: Your older brother!
CHARLIE: I have an older brother? (resumes singing)
Whoever this guy is, my new older bro <dum dum>
I'd quite like to meet him, I didn't know
Why is he in this institute?
Is he big or fat or cute-

DIRECTOR: Here he is. Raymond, an autistic savant. He lives here.
CHARLIE: My brother? (Director nods) Right. Well now I shall walk him right out of here, against the law, like the greedy bastard I am.
DIRECTOR: And I won't stop you, because...because... (mumbles incoherently) and so, yeah, that's it.

They shuffle off slowly to either side of the stage. Raymond, played by a real autistic savant, hops.

Raymond, Charlie and the girl are in the car, travelling to Los Angeles.

SUSANNA: Why are we travelling to Los Angeles?
CHARLIE: It's a plot device, stupid.
SUSANNA: Don't call me stupid! I thought you loved me!
CHARLIE: I do...sometimes I stay awake at night just to watch you breathe. I love you!

(Audience take note: clearly, Charlie does have a heart! A freakishly stalkerish one, but still!)

CHARLIE: (continuing) Now, Raymond, what about you? You okay?
RAYMOND: Of course I'm not okay! I'm an autistic savant who has been kidnapped and forced to work every night on stage playing a character with an unrealistic version of my disease, when I should be getting proper care at home!

(Pause. Music starts. This time it is from The Wizard of Oz.)

RAYMOND: Some-wheeeeere, in Cincinnati...
Way up high...
There's a store that sells cheap clothes,
To every passer-by...
CHARLIE: Hey! HEY! Shut the hell up! K-Mart sucks!

Raymond and Charlie are in a motel room.

RAYMOND: Where is Susanna?
CHARLIE: I don't know. I don't even know why she was there in the first place.
RAYMOND: I'm an excellent driver.
CHARLIE: Course you are. Anyway, now it's time for an emotional sing-song whilst the audience heart melts.
RAYMOND: Of course that would be dangerous. Definitely very very dangerous. Like driving on the highway. Of course, 68% of car accidents in 1987 happened on the highway...I'm an excellent driver.
CHARLIE: Seriously. Shut. Up. I don't want to hear any more about the highway. It's bad enough you won't let me drive on it. Which, of course, you won't. Just in case anybody... (gestures wildly to the audience) ...was wondering what was going on. (Pause).
RAYMOND: Of course, Qantas never crashed.
CHARLIE: Yeah, about that. That doesn't help. If you weren't so scared of plane crashes we could have flown there by now! But no, you're so scared I'm trawling B-roads...
RAYMOND: Yeah, I know. Why are you telling me?
CHARLIE: Oh. Um. Well I wondered if it might explain anything... to anyone. Maybe. (coughs and points head towards audience)

(Raymond is not paying any attention).

CHARLIE: Raymond? Oi! Raymond! Isn't it, er, maybe, time for a song? (He tries to subtly mouth something to Raymond, but he is actually in a trance. Charlie kicks him.)

(Raymond screams, holds his head in his hands and beats it against a table).

CHARLIE: Raymond! Raymond, I'm sorry! I just thought we could, you know, stick to the script- (tries to restrain Raymond, who lashes out and runs off stage).

(Vicious hands thrust Raymond back on stage. He looks terrified).

(Up-tempo dance music begins, whilst Raymond and Charlie burst into extremely acrobatic dance moves, similar to the High School Musical ones. The instrumental ends as they are performing cartwheels.)

CHARLIE: Well done. That was good. Now, go to sleep.
RAYMOND: But it's eight minutes to eleven. I only sleep at eleven. I need my juice and a book to read until eleven.
CHARLIE: (sighing) Here's your juice. Here's a phone book. Okay? Knock yourself out.

RAYMOND: Of course, that would definitely be very dangerous. Definitely might go unconscious...

Raymond and Charlie are eating at a cafe, somewhere.

GLENDA: How can I help?
CHARLIE: Hi, can we have two pancakes with maple syrup, please. But, can you bring the maple syrup to our table first?
GLENDA: Uh, sure...
RAYMOND: (quietly) Dobbs, Glenda. Two-oh-four-six-eight-one.
GLENDA: (backing away) How do you know my phone number?
CHARLIE: Yeah, how do you know her phone number?
RAYMOND: 36, Columbia Road. Doberman, George. Three-nine-nine-four-six-four-
CHARLIE: Listen to me!
GLENDA: (hysterical) STALKER!!
RAYMOND: You gave me the phone book to read.
CHARLIE: You read and memorised the whole fucking phone book?
RAYMOND: Only up to G!
GLENDA: Shit! It's the stalker! He's come back for me! (to another waitress) MARY, call 911!
CHARLIE: You read up to G!? A, B, C, D, E, F and G?
RAYMOND: Half of G. Of course, more like two thirds of G. Granger, William. Then it was eleven.
CHARLIE: Holy cow! (to Glenda) No! Don't call 911! He's just an autistic savant. Show her, Ray.
RAYMOND: I'm an excellent driver.
CHARLIE: No...say something intelligent like you do. Tell Glenda.
RAYMOND: Say something intelligent? Like you do? (Charlie nods enthusiastically. Raymond pauses and quotes him:) Sometimes when you're asleep, I just stay up and watch you breathe.

Glenda punches Raymond in the face, and then flees the shop, screaming.

CHARLIE: OK, yes, I said that. But I wanted you to show her that you were a savant, you know, by telling her how many toothpicks were in this box or something. Are you okay?
RAYMOND: AM I OKAY? CAN I REMIND YOU THAT I NEED 24 HOUR CARE AND TIRE EASILY, YET I AM BEING EXPLOITED RUTHLESSLY BY THE PRODUCERS OF THIS MUSICAL AND I JUST WANT TO GO BACK TO MY SAFE CARE HOME?
CHARLIE: Oh, give over, you're getting paid aren't you?
RAYMOND: I GET PUNCHED IN THE FACE IN THIS SCENE EVERY NIGHT!
CHARLIE: Okay, okay, if I talk to the writers maybe we can make it a fake punch or something. But, please, for now, can we stick to the script? (loudly) Say, I wish you'd said how many toothpicks were in this box or something!

RAYMOND: I think I have concussion.
CHARLIE: PLEASE. THE TOOTHPICKS.
RAYMOND: (crying) Okay, okay! (reciting from the script) "There seem to be 146 toothpicks there...
CHARLIE: Wow! You're exactly right! (Grins at the audience. There is a pause as Raymond finishes wiping his eyes and stops rocking back and forth.)
RAYMOND: Dobbs, Glenda. (sniffs) Two-oh-four-six-eight-one.
CHARLIE: Exactly. (Bursts into song with Raymond, possibly like Do-Re-Mi. All the surrounding tables also get up and spontaneously start to dance. It is remarkable that no one gets hurt in the rousing number.)
Two - a number, between one and three,
Oh - a way of saying nought...
Four - is what, they say in golf,
Six - amount of times we've fought!
Eight - a needle pulling threaadddd...
One - I think we got mixed uppppp....
Now - we've almost reached the endddd...
And it brings us back to Two, two, two, two...
Two-oh-four-six-eight-one-now-two!!!

(Repeats, until the big song finish. Half the customers are now so drunk they keep falling off the stage and landing on the orchestra).

Okay, you remember? Two for good, one for bad.

Charlie and Raymond descend the escalator, wearing smart suits. They are in a Las Vegas club. Everything that happened between the previous scene and this scene in the film has been ignored, because it is far too boring for a musical.

They sit down at a card table and begin to count cards, winning lots of money. Charlie looks ecstatic, whilst Raymond is merely bored. Music from Joseph and the Technicolor Dreamcoat starts up.

(Someone walks across the stage with a banner saying "Obligatory Moral Message Of The Play Can Be Found Here!)"

Charlie, Raymond and the Director of the Mental Institute are in Los Angeles, some time later. An attorney is also there.

ATTORNEY: Oh grow up. You've only known him two days.

CHARLIE: But they were the best two days of my life!

Reprise of the previous songs begins, with Charlie, Raymond, Director and Attorney all singing very loudly. The other characters all come on as members of the chorus for the final number.

Raymond, the Attorney and the Director leave. The Chorus also file out. Finally, Charlie leaves, humming quietly "I got the... Bare Necessities, the lousy Bare Necessities..."