From Uncyclopedia, the content-free encyclopedia
Jump to navigation Jump to search
“Man up”

~ Jimmy Wei on HowTo:Be A Man 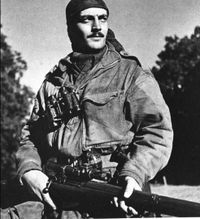 I'm ready to teach these assholes about manliness, sir.

Well, hello! I hope you're ready for some spring cleaning... of the spirit! This article was written by me, who you will refer to as "SIR". It's taken from the introduction of my book, The Encyclopedia of Machete Battles, and it will teach you how to be a proper Manly Man. This means you'll be learning how to do pushups, how to do laps, and how to push down your disturbing thoughts concerning other men!

I know why you came to this "webpage" on the "internets"! You want to know how to be a man, correct? Well first of all, there are a few things you should know about me that made me a man...

This flag is more manly than you. At least it has a gun...
AND A GIRLFRIEND!!

You're wondering how I got this hideous scar, right? Well, let me tell you the story, and hopefully some of its manly-ness will rub off on you (in a non-sexual way, of course).

When I was only 5, I got my first tattoo: two dragons being intimate on my chest. I was abandoned on the mean streets of Milwaukee (home of the beer goggle) by my two or so parents at the age of 4. I'm so manly that both my parents were, in fact, dudes. I'm not sure what that means, but it's gotta be manly. Okay, they didn't really abandon me, but I did leave them, in order to follow their example. Complicated enough for you? Not if you're a real man.

I skipped my teenage years and went straight to manliness, joining the Navy Seals at age 12. Of course, I wasn't always an officer. I had to work as a lookout deep in the jungles of Mozambique before I became an officer. Those weeks were the worst years of my life.

All The Other Years[edit | edit source]

These are the years when I lost my left eye and my left leg... and my left arm... I'm not going to say much, but it involves a contrived centrifuge, a pricey toaster, and a petrifying sockpuppeteer. I then had to retire (BASTARDS!!!) from the military life, and settled down to write this Encyclopedia of Manliness, if you will. Now I live in the outskirts of New Jersey with my pumas, black bear, and my three roosters. Now I just write books based on my manliness. Now what about you, you scrawny bastard? 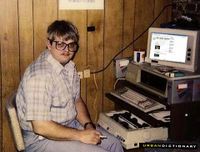 you really do make me sick. Do you realize that?

I notice you've got a unicorn binder here? And what's with the pink shirt? Are you a homo? Or some kind of magical unicorn? Unicorns don't exist, DUMBASS!! Do you want me to take you to the petting zoo?!? Do you wanna feed the ponies?? Do you wanna feed the elephants 'n' so forth??!? I hope you grow out of it!! Do you still live with yer mamma? Do you still suckle on her tits like a wee little baby? Do you still sit at home and watch yer damn cartoons?? YOU MAKE ME SICK, AND I'VE SLEPT INSIDE BANTAS ON THE ICE MOON OF HOTH!!! IN MY DAY, IF SOMEONE ACTED LIKE THIS, THE SPANKING YOU WOULD RECEIVE WOULD STILL STING WHEN YOU'RE BLOWN OUT THE AIRLOCK!!!! I SAW YOUR DIARY, OKAY! I KNOW THAT YOU LIKE BEANIE BABIES!! I BET YOU WOULD LIKE TO DATE ME, WOULDN'T YOU?? WOULDN'T YOU?? WELL YOU CAN'T, WIMPY!! ONLY THE MANLIEST OF MEN CAN DATE ME!! EVEN THOUGH I WOULDN'T ALLOW IT 'CUZ I AIN'T A GAYBO!! I'M THE OPPOSITE OF A GAYBO!! I'M STRAIGHT, OKAY?!? ISWEARIMSTRAIGHTDADDYPLEASEDONTHITME...

Why Should I Want To Be A Man, SIR?[edit | edit source]

Of course YOU would ask that question.

How Do I Become A Man, SIR?[edit | edit source]

Whoa, excuse me. That was a little bit crazy. Well, you have to expect that from men who've been through as much as I have. Now, you can't become a man overnight like I have: yer gonna have to work at it. The following are the 7, or whatever, most manliest things of all manhood that you're going to have to accomplish if you want to be a man. Most of these items are absolutely required, but all of the items are extremely manly. 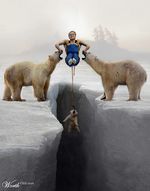 The world is full of manly places to have a cave, or to live under a bridge in. There are some questions you should ask yourself before you decide to live there.

There are few parties that are as manly as the Republican one. It has a history of being manly, the most manliest of which is the Vietnam War, which lasted nigh 500 long, hard years, which resulted in 200 million deaths: 50% of which were by machete, and 25% of which were by Kung Fu. The Republicans are known for their deaths, and the way in which they execute them. All the other parties are, frankly, soft wet pussies. Soft wet pussies, ready to... well, you get the point. There are a few things that all Republicans have in common:

Get A Mental Disorder[edit | edit source]

my other morning routine

If worse comes to worse you can always just kill yourself, this too is very manly as proven by Ernest Hemingway, Kurt Cobain and Kanye West.

It's easy to figure out what a good car is or has. You just have to follow the rules of the road, so to speak. 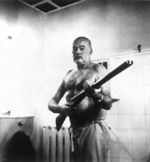 Ernest Hemingway loved his shotgun very much. This is why he's a better man then you.
“You know what they say about men with big guns, right?”

Even though only your hunting buddies will see your gun, you still have to own one. It's a representation of how you are as a man. There are a few rules you should know before you just go purchasing guns:

When picking emotions to become emotionless on, you don't really have to be careful. There are some emotions, however, that you should get rid of as soon as possible.

The best part is that just about any emotion can be channeled into anger. The use of tools and language may be what makes us human, but anger is what makes a human a man. Trust your anger. Let it flow out of you and it will bring you power, confidence, and perhaps the single-most important key to manhood, getting the living shit beat out of you on a regular basis. Because you deserve it. You miserable excuse for human garbage. 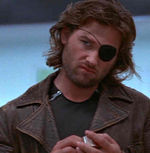 Facial hair on a man is like legs on a woman: they're how you identify the sex of the thing you're looking at. Well, I guess some people who aren't women have legs, but they weren't messed up in THE WAR, and therefore aren't men. You have to have a long, luxurious beard like that guy in Kill Bill, and you have to stroke it thoughtfully every time somebody talks. Hopefully, along with your facial hair you have beady little eyes so that you can totally mind rape the people you're talking to. At the very least, in order to become a Real Man, you must have a moustache. After all, a man without a moustache is like a woman with one.

Exercise is a funny, mystical thing. Good exercise has a few things to it: 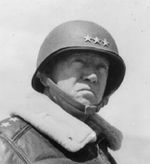 This is George Patton, he's killed millions of lesser men just like you.

The last step to being a man is to join the Military. If you're semi-retarded the Army would be your best choice, if you're mental unstable you'll want the Marine Corps, if you're a fattie who likes bragging about being in the 'Military' the Air Force is for you, and if you're a closeted homosexual trying to butch up, the Navy is recruiting. Also, if you can not get into the real military there are plenty of paramilitary organizations which will gladly have your fat, retarded ass. Also there's the Air Force. Remember, it's not a cult, it's a cult with guns. If you join a military group, make sure it's fairly manly. There are lots of reasons to join:

I hope that, as you were reading my list, you also followed it. This page has probably been on your monitor for a while, in that case, but this page has the ability to even make your computer more manly. I salute you, man, and wish you well in all your future endeavors!

Further Reading On How To Be A Man[edit | edit source]