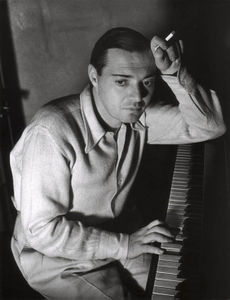 Your dad can do two things at the same time. Can you?
“I have nothing to declare, except that my sexual preference and the public views towards it in this time mean that I will not be a father anytime soon.”

~ Oscar Wilde on not having kids

“I am sorry I was being rhetorical. I have a family and a wife but only the lie is real.”

~ Oscar Wilde on forgetting he has already sown his seed.

Your dad, like your mom, is an important figure in your life. He is the dad that pays the bills. He is the dad that collects you from the police when you get arrested for a stupid prank. And he is the dad that sells you the address of an abortion clinic or adoption agency whilst you are about to sit your college exams. Without your dad, you would not be here. Now there is a thought to masticate on whilst eating your shreddies.

Without your dad and the world is without you. Forget what you could have done, you will not be born. You are a product of your dad's gonads, incubated and nurtured in his sack prior before the countdown to the emission that produces YOU. Whether that moment came on a park bench, the back seat of a Toyota 4x4 truck or, most likely, in a whorehouse, your dad was there when it mattered. At your conception.

You probably should share a close bond with your dad before he dies. Think of Hamlet on the battlements of Elsinore Castle with the shade of his father. Did his dad help him after death? No, the ghost encouraged his son to go a murderous spree that would end Hamlet's own death - and the end of the family line. So much for postmortem Danish parenting skills.

But consider this fact. Your dad walked 15 MILES in the cold, frigid air every day to get an education so that he might one day sex your mother. That is an achievement on anyone's iPad. You see your dad, a least a living and breathing one, is vitally important to how you will develop in later life. So when your dad has long gone and no one visits that hillside where you dumped his ashes down a rabbit hole, you will have what he had once.

To support the importance of a father figure, children who are raised without fathers perceive themselves to be less cognitively and physically competent than their peers from father-present families. Mothers raising children without fathers reported more severe disputes with their child. Sons raised without fathers showed more feminine but no less masculine characteristics of gender role behavior. Sons raised by apes or wolves often go on different psychological paths in relation to their father figure but to be honest, that is perhaps the least of their problems.

Your Father Has Control Over You!![edit | edit source] 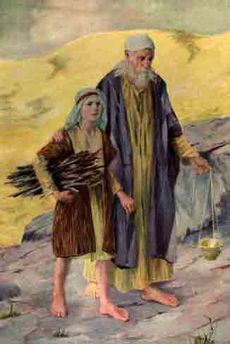 'We won't be late for dinner Isaac. I want to show you our new stone picnic table.'

Your dad is often seen as an authority figure. The father authority exercises repression over sexual desire. A common observation among scholars is that the authority of the father and of the political leader are closely intertwined, that there is a symbolic identification between domestic authority and national political leadership. In this sense, links have been shown between the concepts of "patriarchal", "paternalistic", "Cult of Personality", "Fascist", "totalitarian", "imperial" and smacking you.

The fundamental common grounds between domestic and national authority, are the mechanisms of naming (exercise the authority in someone's name) and identification. In a patriarchal society, authority typically uses such rhetoric of fatherhood and family to implement their rule and advocate its legitimacy. It may also involve taking you on hiking holidays in virgin forests and leaving you there to play with Grizzly bears. This is perhaps a subconscious wish by your dad to prevent you supplanting them in the affections of a partner.

In the Roman and aristocratic patriarchal family, the husband and the father had a measure of political authority and served as intermediary between the household and the polity." In fact they could legally kill you. The law then was for un-related disputants, not relations within a family. In the Bible sons who didn't eat their greens or blasphemed were taken to Jerusalem to be stoned to death by the Priesthood (though if your dad could pay the fine, he would deduct it eternally out of your pocket money).

In Western culture patriarchy and authority became synonymous. Kings, emperors and popes ruled as absolute monarchs and this was repeated right down the social ladder to peasants in their mud huts. Your dad, whether he wore a rich gown or re-used lavatory paper, was legally superior to you. No son was special to Your dad. Even during the Renaissance and the Enlightenment, sons were to respect their fathers and always defer to them on the choice of bride or career. Tough shit waited for those who didn't comply.

In the 19th century Europe, the idea was common, among both traditionalists and revolutionaries, that the authority of the domestic father should "be made omnipotent in the family so that it becomes less necessary in the state". Men were socially encouraged to grow beards to emphasise this point. So men as politically far apart as William Gladstone and Karl Marx grew their facial hair to extravagant thickness. Another, visual reminder that Your dad could do something you didn't yet have the hormonal machinery to do.

In the second part of that century, there was an extension of the authority of the husband over his wife and the authority of the father over his children, including "increased demands for absolute obedience of children to the father". Europe saw the rise of "new ideological hegemony of the nuclear family form and a legal codification of patriarchy", which was contemporary with the solid spread of the "nation-state model as political norm of order". To put it simply, Father Knew Best.

Which One Is Your Dad?[edit | edit source] 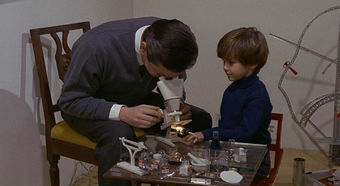 'I'll be right with you junior. I'm just checking these lab results before I speak to your mother.'

It is important that when considering the father-son relationship to understand that you will need to identify your correct father figure. So here are some examples:-

You and Your Dad Now[edit | edit source]

So it all changed from 1950. Your dad has been dethroned from his power. Blame your mother but above all, blame yourself. Your dad doesn't know if he is socially responsible for your upbringing or just a passing sprayer of sperm to disappear out of your life the moment he gets bored. The seeds of destruction indeed were sown and now you will reap and weep at their consequences.

The Patriarchal system has broken down, power no longer resides with Your dad or anyone else's father. Be not surprised if the next Pope turns out to be a woman, the Holy Mother Pope Joan II is just waiting in the wings. And it's all your fault. The historic links of authority are shattered. Be ashamed, be very ashamed.

One final thing about your dad...can you lend me a £100 for the weekend?