From Uncyclopedia, the content-free encyclopedia
(Redirected from Indiana Jones)
Jump to navigation Jump to search

Indiana Jones and the Typical University-level Dig is a 2011 direct-to-DVD spinoff of the Indiana Jones series, documenting the struggle of Indiana Jones and his posse to gather pieces of Norman pottery within a three day time frame, all while combating the Nazis and bloodthirsty ethnics unable to speak a word of English typically found on an English local council.

The movie was surprisingly well-received for a DTV production, although some questioned why the main characters hadn't aged despite the passage of sixty years ... because the greatest concern of the series had always been historical accuracy. 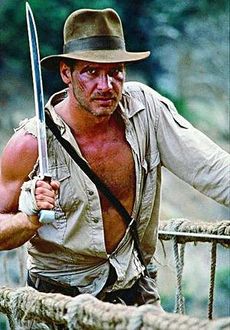 Aware of Jones's broad academic reputation, the students first task him with something of absolutely no use whatsoever. Site geology.

Spielberg wished to establish a true to life depiction of university level archaeology, hence the film opens to a man in a cardigan spoon feeding information to a lecture hall of hungover first year students. In typical exaggerated Hollywood style, several of the students are both taking notes and comprehending the content.

A letter, addressed to one Professor Roberts, is placed on the desk of the lecturer. After a brief pause his leather case falls to the ground, spilling the contexts of other Norman sites all over the floor. To the dismay of Roberts, the council has imposed a three day limit. A limit that only allows for a single context recording of the area, a type of recording known to create severe chronological anomalies in phase records.

The film transitions three weeks to the present day. Indiana Jones is furiously thrusting at the controls of a propeller driven aircraft, a large shard of the true cross protruding from the spluttering motor. The aircraft enters a steep decent and Jones, muttering under his breath, hurls an abnormally large terracotta warrior from the plane. This proceeds to land on the cockpit of a pursuing jet fighter aircraft as the pilot shouts filthy sounding Mandarin. The damaged jet spirals down into Stonehenge and all in the immediate vicinity is consumed in a massive fireball.

Roberts: The council refused our third trench. Apparently there isn't sufficient evidence of an external wall abutted by a secondary feature in that location.

Jones lands abruptly before the group. Despite having missed the announcement, Jones speaks with advanced knowledge of the situation, presumably because he stalks the Facebook pages of students like every other professor.

Jones: Is this sufficient evidence for your council?

In the manner of most university academics attempting to start conversation with their charges, Jones confides with the students an unrelated story of his youth. Jones recounts how his encounter with a gang of smugglers drew him to archaeology. Specifically, the years of initial site study, correlation of their particular smuggling den with other historical dens in the area and discussion whether the use of a 'den' was correct within anthropological theory concerning non-peg-legged smugglers.

Because otherwise he would be a fucking antiquarian.

There is initial disagreement between the students and Jones concerning whether the mustachioed technician should drive the geophysics device, or whether Short Round should do it with wooden chokes tied to his feet. However, all warm to Jones after he displays his unique ability to identify internal walls, load bearing walls and those concealing some form of flame throwing insect.

Jones shares a tender scene with the students when they demonstrate the correct method of historical stratification, as opposed to Jones's long-practiced things that will make Nazis chase me and objects that will melt my face off. Indeed, the one student who brings his laptop everywhere allows Jones to watch reruns of a somewhat comic television series while the pair clean recovered artifacts, introducing Jones to true archaeological dig practice.

With time Jones and Short Round become suspicious of a lab-coated man wielding archaeomagnetic equipment and an Eastern European accent on the dig site and the pair proceed to pursue the man as he flees to the nearest applicable laboratory. The man is apprehended, protesting in Russian for better subtitles, however several molecules of crude claywork from the site are lost to the spectrometer of the joyless chemistry majors.

The ever fallible Jones is consoled that, yes, the molecules probably did belong in a museum. 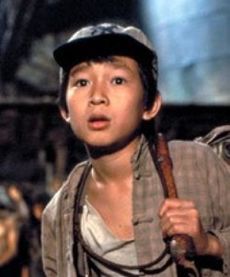 Short Round, pictured making the head of an insurance broker explode by not wearing a hard hat on what is technically a work site.

The following day the students deal with significant fill on the site. To the horror of Jones, it is later revealed this fill was not a result of slumping, but a prior dig funded by the University of Düsseldorf.

Unsurprisingly, several of the female sophomores become possessed of some ancient madness released by the pillaging Teutonics. The innocent students and their double-barreled surnames find themselves transported to an archaic temple of debauchery and other Burberry products, the local pub of an English country town.

Back in his element, Jones first must first flee the raging lahar (mud torrent) produced by flushing an average public toilet. With just seconds to spare, Jones rappels off an individual humming out of tune in a cubicle, avoiding certain death by rolling urinal cake.

Next, Jones faces a pale, angry little man who sought to defile the sophomores in the rear of his Peugeot 205 as part of a long forgotten ritual that would summon a druidic demon, or at least serious questioning of his own manhood.

The CCTV system then inexplicably proceeds to destroy the establishment, because both directors felt it was wrong to depart from franchise tradition.

Though several students succumb to a business degree during various subsequent adventures, the film eventually concludes on a high note as all characters discover friendship and trust.

Neither of which have any historical value. 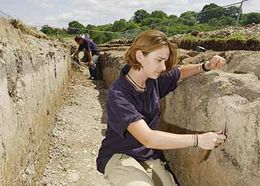 As a traditional thank you, Jones is presented with a pair of zip-off cargo pants and a hand-full of SPF 30+ suncream by the students.

Roberts: Now Dr. Jones this is something quite special, a Nordic stele on whale bone.

Jones: This opens what now.

Roberts: No, no Dr. Jones it is a code, riddle if you will. This artifact suggests continuous 9th century habitation.

A storyboard image of the film. The working title Harris Matrix was thought to be too close to another franchise with ill-conceived sequels.

Middle England was chosen for the setting, as a primitive society that had not fully embraced firearms would fascinate an American audience. One particularly comic scene depicts a local English policeman brandishing his truncheon with fury and moving towards the protagonists, only to be struck down by the superior pistol of Jones, hilariously displaying the clash of cultures as the officer collapses limp in a pool of arterial blood.

The temples of Greece had initially been scouted as a suitable location, however both directors agreed that there was very little left for either Jones or some form of Nazi to recover as Goldman Sachs had already looted everything of value. 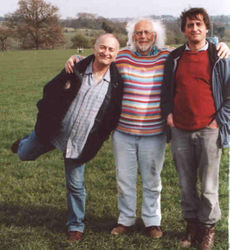 The success of the film sparked rumors of a prequel in the typical Lucas style – starring an exceptionally annoying character. Probably Tony Robinson from Time Team.

The film achieved moderate success in the continental United States, becoming the third most successful of the franchise when adjusted for inflation.

Lucas admitted that he was forced to remove a tense scene in which Jones offers to buy the group sausage rolls and Diet Coke and a first year student reveals she is vegetarian. This was instead replaced with a scene of the council chambers being destroyed by a movement of computer animated sheep, as the average American test audience related more to animated farm creatures than people with college degrees.

Featured Article  (read another featured article)
Featured version: 29 October 2011
This article has been featured on the front page. — You can nominate your favourite articles at Uncyclopedia:VFH.