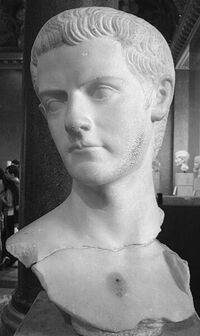 A bust of Rome's favorite Emperor, Caligula. It is considered an archaeological artifact because it's really old.

Archaeology, or archæology (from Αρχαίος, nobody cares, and Λογος, the study of not caring) is the study of really really old stuff. Many people confuse archaeology with "archeology" due to the almost identical spelling and the fact that they mean the same thing.

While seemingly pointless, archaeologists assert that we can learn lots of new things by looking at old things, despite the immediate logical impossibilities. Most archaeologists are full of theories with their "carbon dating" witchcraft. As Archaeology for Kids host Bryan Williamson once said, "I mean, carbon atoms don't have sex, do they? Why should they date then if they can't do anything freaky with electrons in the privacy of a high speed collision chamber? Ok now I have got that off my chest, I will return to imagining how dead people once lived."

The first reported archaeologist was a king of Babylonia called Nabonidus in the 6th century B.C. He was so keen at preserving old buildings that he neglected to look after his country and was overthrown by Cyrus the Great of Persia. Modern historians, who are to archaeologists as strippers are to losers, know this to be true as Nabonidus's discarded monogrammed shorts and trowel were found embedded in ancient ruins that belonged to civilisations much older than his. Another archaeologist of note was St. Helena (mother of Constantine the Great). She had Roman Jerusalem dug out in search of the very spot where Jesus was crucified. When it was found, a Roman temple that had been built over the site was completely obliterated. This disregard for other evidence that didn't fit the supposed mission would be later adopted by future archaeologists.

Archaeologists open (re-open?) the tomb of Pharaoh Phail-Ure. It is full of discarded cigarette ends, beer cans and a note in hieroglyphics that says best before A.D.

Modern archaeology only really started in the late 17th and 18th centuries when a passion for looking at ruins and hacking off bits to take home were part and parcel of the Grand Tour suitable for educated gentlemen. From then on, the past acquired a value and a taste for ancient artifacts (broken oddments) really took off and saw generations of men (very rarely women back then) going all over the world with a bucket and spade to get themselves a small, usually financially and morally worthless rock-sized slice of the past. Today it has never been easier to get involved in archaeology. The role of the expanding market and bartering websites such as eBay has enabled people to sell all those giant Egyptian pyramids they dug up in their garden. An explosion in "artifacts" (old stuff) resulted. Artifacts therefore became readily available for academic consideration, and many crusty old ex-history professors became very excited. This was how modern archaeology was born.

In the end, the rise of modern archaeology is best described by British Museum chairman Neil MacGregor: "So what can you learn from all this interest in digging up the past? That our ancestors had appalling taste in home decoration or wished to be buried with everything except the kitchen sink? What goes through your mind when you look at some shapeless bowl with a label that describes it as Made in Ancient Greece. Well I can tell you what goes through mine. I see a man in safari suit with hairy white knees looking into a pit being dug in the midday sun by some desperate natives for less than a dollar a day."

Piss off. Do not disturb until Judgment Day.

Digging is the most important of the three archaeological disciplines (looking important and saying "hmm"). Shovel work has two purposes: it supplies the intrepid archaeologist with precious artifacts and allows them to destroy any evidence of anything vaguely historical in an attempt to confuse people. It helps to cover up their mistakes and that the spoil heap left contains all the real evidence so casually cast aside.

The first systematic diggers were the French. Napoleon's invasion of Egypt may have looked like a booty collecting mission but was also a cultural ransack to take stuff away that the locals had obviously not taken care of. This attitude was later adopted by the British, Americans and finally the Germans. That is why the British Museum, Louvre, New York Metropolitan Museum and Museum Island in Berlin now hold the creme de la creme of the world's ancient skips. And this in turn created a demand for 'expeditions' to go out in search of the first evidence of the Israelites and whether King Priam had planning permission when he built Troy. Those glory days have gone now, archaeology is a lot less exciting and now has to follow petty rules about not smuggling discovered treasures out of the host country.

So now it's all about mapping and surveys. Non-invasive surveys simply give you more maps, and that's, like, what the historians are into. And perhaps looking clever. Which is also the second most important, as sounding intelligent can sometimes get a very ugly person laid, and keeping chipper is key to an archaeologist's mental health. However, international law states the excavation cannot take place on areas deemed unfit for environmental reasons. For example, plague pits in Europe, Disneyland for its nauseating cheerfulness, and Ireland have all been declared unfit for further excavation. So don't bother asking for a permit unless you are prepared to sleep with someone in uniform, i.e. a museum curator.

Fortunately, this has left a large amount of space left to dig. Mattocks are commonly used as the major digging tool. It has also been realized that their use in political assassinations is lucrative to the intrepid young archaeologist. Some like to use heavy machinery as their primary tools for digging. These are lots of fun and made sites, now incorporating heavy machinery, look more important.

Information we gather from vases tells us that people back then were incredibly diligent. The vase making process from ancient Mesopotamia was as follows:
A. Dig up some dirt.
B. Wet it with water.
C. Sculpt into something that resembles a vase.
D. Light the damn thing on fire.

As you can see, this was a very long and tedious process, one that only the most skilled were able to follow through.

Typical tools found in excavation sites include drills, hoovers, no more nails, WD-40, a vacuum former, a stick, a severed toenail, victims of Jason Voorhees, and duct tape. Finding tools is meant to prove that the Native Americans were not as retarded as we think they are, capable of making simple tools such as microwaves and scalp peelers, which were considered very impressive in their time. Arrows, which were used for hunting and shooting apples off of someone's head, were also popular of the Native Americans, showing that they liked to kill lots of things. Archaeologists have also discovered that the Native Americans used fire to cook things and burn wagons. 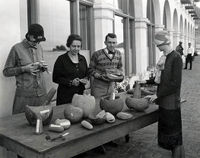 Come look at our lovely artifacts! 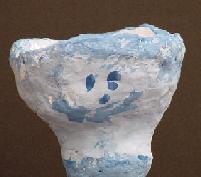 A clay sculpture from the 12th century, currently on display at the Museum of Ancient Rubbish

Also known as "big stone structure thingies", statues are incredibly elaborate pieces of art. Of course, something so elaborate must be made elaborately. Statues, paintings, and other forms of visual art are extremely important in archeology. These visual representations can shed a lot of light onto cultures and the kind of backwards superstitions within them. Very rarely are pieces of art preserved over the years in excellent condition. Michelangelo's Renaissance era piece known as David suffered many chips and a fractured phallus over the years. The Roman Colosseum is known for the huge chunk missing, which was caused by an earthquake. Attempts to superglue the chunk back on have been futile.

Architectural archaeology is the study of standing structures using techniques developed for ancient buried stuff, which is eminently sensible. Although studying buildings from an archaeological perspective has traditionally focused on the study of stately homes, churches and other high-status buildings, the modern architecture archaeologist is nowhere more at home than in a draughty post-war warehouse which was last used for manufacturing Burberry knock-offs. Other popular sites include culverts, squats, asbestos factories, motorway bridges, pylons, Gothic cathedrals, and concentration camps.

It is amazing that people were so proud of the rubbish they made that they recorded it on stone, rock, paper, scissors ... well just about anything. And is it interesting? Well here is an example:

"... I made this inscription because I was fucking off from school in 600 AD. I know many years later some idiot will dig this up and make it the central exhibit in some crap retrospective about my 'society'. Well I will tell you – this year SUCKED HARD. Oh, and I decided to write this in ancient Philistine so no bugger will be able to translate it."

Sometimes you may get a gem, some dirt on an ancient bit of gossip or a curse written in lead hoping an enemy's genitalia will shrivel or that Jesus retired from creating a new religion to run a sweet shop in Tarsus but I can assure you these are bloody rare. Instead you have to get excited over some dull recitation or a shopping list. Give me the Book of the Dead anytime. 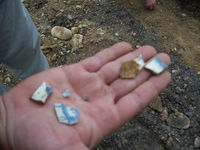 Get over it. Buy yourself a new coffee pot.

So there you go, that's about as much you need to know about archaeology. It's waste of time, take it from me. Even if you find something of value, you are supposed to hand it over. Just re-bury it and come back after the dig with a metal detector.

All I can say that this "artifacts" racket is big business. You'll get your face on TV but what's that for. Take another look at yourself in the mirror and ask why you are spending time in a muddy field, caked in filth. Unless you fancy a dirty date, archaeologists are well known to be lousy sexual partners. They just want to dig out your past and that's no fun. Well not for me as ... er, I don't have much of a past to put a shovel to in that area.

Do you know how long the Roman Forum has been a ruin? Well at least 1,000 years. Why leave it like that, certainly our ancestors – the ones we like digging up – wouldn't have bothered preserving it this way. They would have got their slaves or criminals to demolish that tip and rebuild it in the latest style.

Next time take a look at people involved in archaeological digs. They're scruffs to a man or woman. No wonder they run away from the present to excavate the past. Perhaps they should be buried with it, entombed for ever and let everyone else to forget it. That's the only lesson from history worth keeping. Let the ground keep its secrets. They're not worth having.

In the days before the internet and iPads, archaeologists had to rummage through a lot of smelly old books to come up with a handy lexicon. Well thank God those Dark Ages are behind us. 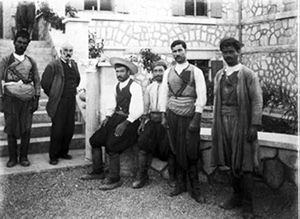 Professor Ludwig Trouzerstaihn and team. Archaeology from the past.

Featured Article  (read another featured article)
Featured version: 18 March 2012
This article has been featured on the front page. — You can nominate your favourite articles at Uncyclopedia:VFH.