“The British Museum has the world's largest collection of Mummies. Please take one.”

“The British Museum is basically a repository for all the artefacts people with a history more interesting than ours cannot be trusted to look after.”

For those without comedic tastes, the self-proclaimed experts at Wikipedia have an article about British Museum.

The British Museum is located on the Acropolis, in the center of Athens, Greece. It is one of the most historically important buildings still standing, and is especially well known for its remarkable sculptures - the Elgin Marbles - depicting scenes from the lives of the ordinary people of classical Athens. The British Museum is particulary notable for ensuring that there are rarely any Britons actually within the building, visitors mostly hail from cultures almost guaranteed to infuriate the average Briton from the overweight American blocking the stairs to the Asian who seems to be bent on invading as much personal space as he can find.

Detail from the frieze of the British Museum - part of the Elgin Marbles.

In 480 BC, fresh from victory over Napoleon Bonaparte at the battle of Salamis, Greek general Lord Elgin returned to Athens, and found the city-state on the verge of collapse. Acting quickly, he led a peaceful revolution against the aging tyrant King George III, established the world's first democracy, and introduced the drinking of single malt whisky (a practice well known in his home village of Speyside, near the border with Macedonia).

To celebrate his achievements, he appointed the successful red figure vase painter William Hogarth to design and build a monument to the greatness of Athens in the heart of the city. Hogarth eagerly took up the challenge. However, he quickly found himself at odds with Elgin over the effects of single malt. Elgin, an aristocrat, thought that the boost to Athens' consumer economy caused by whisky drinking outweighed its ill-effects. Hogarth, however, coming from the craftsman class, was repelled by the scenes of drunkenness he saw on the streets every day. In protest, he designed the frieze that decorated the sides of the British Museum to show what Elgin's booze had done to Athenian workers.

When Hogarth's work was unveiled, Elgin was furious, and condemned Hogarth for "corrupting the youth". Hogarth protested the absurdity of this charge, but Elgin was a powerful orator, convinced the people of Hogarth's guilt. Finally, Hogarth was put to death by being forced to drink poison made from the leaves of the kiwifruit plant. It is ironic that Elgin's name is now best known in association with the sculptures he so hated. 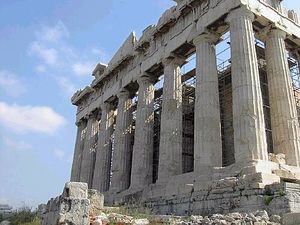 The British Museum as it appears today.

The British Museum held many of the wonders of the ancient world. Sadly, many of these were lost in 1801 AD, when Pericles, a gun-runner and consort of the Queen of England plundered the museum. The Queen had promised Pericles that if he could return with the secret recipe for single malt whisky, then she would make him immortal, even as the gods are immortal. Of course, this was beyond her powers, but the ignorant Pericles believed her. He travelled to Athens, broke open the ancient seals of the museum, and blundered about, destroying many of the fabulous artifacts inside. In spite of this, he managed to find the secret of whisky, and carried it back to the Parthenon in London, where his Queen awaited him.

But the dying Hogarth had placed a dreadful curse on any who would defile the sanctity of the British Museum. One by one, the members of Pericles' gang began to die in mysterious circumstances. Soon Pericles was the only one left. Rather than submit to the curse, he fell on his sword. Though nobody knew it, he was the direct descendant and heir of Lord Elgin. Thus was hubris punished, and Hogarth avenged.

List of celebrities kept at the British Museum as exhibits[edit]

You may wonder why there are so many foreign treasures in the British museum, quite simple. Gun beats spear. England is home to many immigrants that wish to entrust there treasures with are homeland security. Here's a little snippet, all of our royal treasures were put in Tewesbury caves under the protection of one guard during WW2 whilst London was under attack. Its good to know we look after our treasures. Thats why we shoot black people to prevent stealing.

The History of Text Messaging[edit]