This article is about the tennis tournament. If you were looking for the college or town of the same name, tough shit.

“In Soviet Russia, Wimbledon is out of Tim!”

~ Grannies all over the country on Sitting in the crowd

~ Sue Barker to Jimmy Connors - In her dressing room 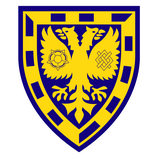 The Wimbledon tennis tournament logo. The two-headed buzzard symbolises the volley-and-return nature of tennis. The symbols on its wings stand for the ball and the net

Wimbledon is a popular British tennis tournament, held in the last part of June (NB see the section Rain below). During Wimbledon Fortnight the entire population of the British Isles are temporarily seized with positively unseemly levels of optimism, resulting in the mistaken belief that an actual Englishman like Tim Henman might actually win a tennis cup, (which was last achieved in 1954 by King George III during the four year great tennis player famine.) The highest scoring match in Wimbledon history was the 2004 Men's singles final, when Sir Dave Sampras beat Tommy Littledick 3-6 2-6 7-6 6-0 1001-999, hitting a world record 992 aces in the process plus saving 687 match points.

Liam Hughes is an item used in this tournament on a day to day basis when the competition is being played. Although his budding career was interrupted when he got called up to play the part of Pussy Galore in the recent James Bond remakes. He usualy just comes of with a few bruises but sometimes comes back with broken ball parts.

This is followed by Tennis Gloom Month, when England realises that no, once again Wimbledon has been won by a lot of feckin' foreigners.

Each year during Wimbledon Fortnight separate tournaments are simultaneously held. The adult contests are: 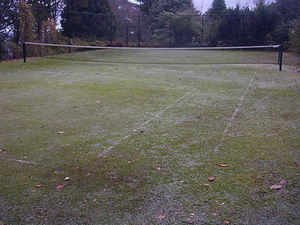 Court 82, where many dreams have come true

Pete Sampras' gender is still unconfirmed as Sampras has too much hair to make any genitalia distinguishable. 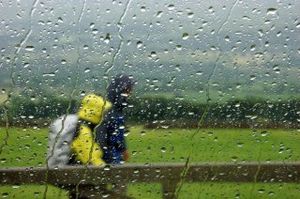 Spectators hurry toward the stands at Wimbledon, anxious lest the weather turn bad.

Tim Henman is also a regular competitor, though neither famous nor interestingly-named. He once finished thirty-ninth. (Thirty-ninth, groaned England, wallowing its way through Tennis Gloom Month.)

Rain is always a major factor at a Wimbledon tournament. The event is scheduled to last two weeks in late June but since Wimbledon lies in the famous "British rain belt" (comprising all of England, Scotland, and Wales) it usually runs over into September, with over 60 days of play canceled due to wet grass. The longest overrun was in 1974, when the Wimbledon fortnight lasted a solid eight years.

In fact, the 2008 Wimbledon will be a continuation of the 2007 event. It will start with Tim Henman already two sets down in the second round, whereas on Court One Maria Sharapova will be taking on Justine Henin in a sporting remake of 'Beauty and the Beast'. 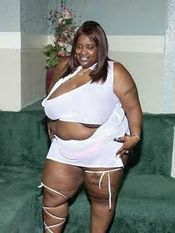 Every summer, when the Wimbledon tennis tournament opens, the British people are seized by a curious ailment resulting in intense (and unrealistic) optimism regarding a British English man (or woman) finishing somewhere in the top ten contenders to a trophy. In recent years this expectation has fallen upon the shoulders of Tim "This Year" Henman, Greg Rusedski and Andy Murray. Henman suffered the most, mainly due to his fear of winning, but also because he was (is? could be either) 100% English. Andy Murray and Greg Rusedski have dual nationality, and so have only a 50% problem. Greg is Canadian by birth, Andy of course is completely British, but just Scottish when he loses. Scotland and Canada are countries that have never won any sporting event whatsoever, and so expect to lose, this causes total equilibrium, and allows the two to lose based on their lack of ability, rather than the pressure.

Teams of dedicated scientists have spent many years researching the cause of this temporary insanity. Researchers at Oxford trace the perennial optimism to the Blitz, when Londoners pluckily defended their city against the cabbage crates coming over the briny, but Cambridge researchers claim that ever since the days of Chaucer the English have believed that one day they would experience "a real bloomin' summer, y'know, when it don't rain hardly" -- and this optimism, ever thwarted, has been carried over to tennis.

University of Edinburgh scientists, however, attribute English optimism to a dietary deficiency -- a lack of oatmeal. The Scots, they say, would never be optimistic about anything. "Y'ken, nat oon Scotsmahn has eeny wee bit o' cheer watsoeever," explained Dr. Dougie MacDreich, on an audio tape he made just before he threw himself off the Fennoch Burn bridge.

Various ideas have been tried and none have succeeded, these include:

Pete Sampras: Firstly the British media attempted to convince everyone that Pete sampras was in fact British, and a resident of Doncaster (in much the same way that when Italy won the football world cup, Simone Perrota was of course from Manchester). When this failed, attempts were made to kidnap Sampras, which only failed when he forgot the words to God Save the Queen, the popular Sex Pistols song, used in the British citizenship initiation ceremony.

Girls Aloud: In 2008 The British Girl band were entered into the tournament as wild cards in the hopes that they might cause an upset in the early stages of the tournament, although there was a slight mix up when the draw was made: Cheryl Cole faced Roger Federer in the first round and lost, Sarah Harding was collared to help out with the people in wheelchairs and Kimberley, Nadine and Nicola were all used as ball girls, much to Nadine's chagrin: "It wasn't even on the fucken show courts! I got court 3 and the other two were out at orangi park! fucken nightmare"

Rain: Desmond from the TV show Lost tried to help compatriot Andy Murray this year, by importing extra rain from the Amazon, bought via Play.com, the delivery arrived on time, and an advantage was clear. Andy would be much better prepared than foreign players when dealing with the weather, except for Rafael Nadal (who developed his huge arm as a small boy while carrying an umbrella in his home town of Pissinitdarnwirainagen). Unfortunately, Murray was lost himself, when his training in the North Sea went predictibly wrong.

"Cancel" Wimbledon: The events organisers were bribed and/or threatened by members of the IRA, in order to pretend the event had been cancelled, while in fact inviting players from the British Isles. The plan succeeded and an Irish entrant won 3 years in a row. Unfortunately, the nail bomb threat was sent to the organising commitee of the Eurovision song contest. A similar plot by the Swedish Mafia, allowed ABBA and Bjorn Borg to gain vital success.

Recently Scotland Yard has found that for several months before the start of the tournament an illegal substance known as 'Gullibleprofen' is added to drinking water throughout England. This allows the BBC to propagate a subtle hypnotic suggestion, to wit: This year Tim Henman may win a trophy, folks. Approximately one week before Wimbledon a cunning trigger phrase is repeated in television and radio broadcasts, and in magazines, newspapers and other forms of mass media.

Scotland Yard has identified a few historic trigger phrases: Removes seventy per cent more stains was used in 2004, and Gentle relief of painful colonic distension was used in 2006.

Broadcasting of the trigger phrase a few days before Wimbledon results in an epidemic of what scientists and doctors term Henmania. Symptoms of this mania include getting confused and saying Hen Tinman or Tin Hatman instead of Tim Henman, shouting "Oh, come on Tim" at totally inappropriate times (usually during sexual foreplay), and buying 600 Union Jacks and sending them to members of one's extended family.

Henman himself is affected to the extent that he looks decidedly unenthusiastic when winning a set. Maybe that's because he shouted "Oh come ON Tim" the night before whilst trying to unfasten his wife's boulder-holder.

In recent years Henman Hill has become Balkanised, with the Andrew Murray faction claiming it for themselves. Active skirmishes have escalated to all-out civil war. In June 2005 British Armed forces were sent in to separate the opposing sides but ended up with different brigades taking opposing sides, which has led to the Wimbledon line separating Henman-occupied-Wimbledon and Murray-occupied-Wimbledon. UN Peacekeeping forces are being sent in.

A relief airlift has been canceled due to rain. 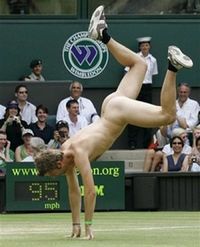 Paul Sampras returning a volley off his buttocks after misplacing his tennis bat. 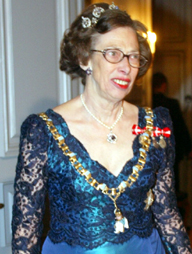 Bille-Jean Sampras at the 1992 Champions Dinner