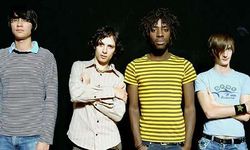 Bloc Party are a British political organisation whose main members are Kele Okereke, Russell Lissack and Gordon Moakes. Its aim is to garner government sponsorship for apathy and sulkiness amongst good looking, Camden-based middle class young people. They attempt to achieve this through the medium of whiny, tuneless music and appearing moody yet undeniably cuddly on camera. 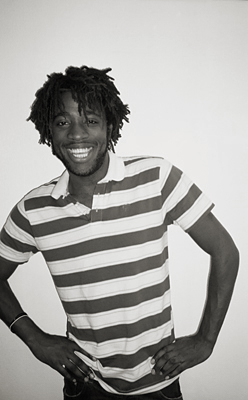 Kele OkerekeKele Okereke striking an eloquent pose in the style of his idol/secret lover, Madonna

Russell "Asymmetrical" Lissack, Kele Okereke and Gordon "Pouty Boy" Moakes met at a party called the 'Reading Festival'[1] in 1999 when they found themselves all awkwardly sharing the same corner. After two hours of uncomfortable silence, they found they had a lot in common and formed the organisation the very same night, taking inspiration from the 'blocs' of cheese the other party-goers were idly throwing at them. After recruiting former Spock stand-in Matt Tong as secretary, they accidentally took the indie music scene by storm, which by championing a band fronted by a black person could claim it didn't mind non-whites, as long as they didn't make non-white music.

For those without comedic tastes, the so-called experts at Wikipedia think they have an article about Bloc Party.

The essential thrust of Bloc Party's manifesto is that moping around the house feeling mildly disaffected is a woefully unsubsidised sector of today's society, a situation that must be rectified by diverting money away from health, welfare and education. Even such a piddling sum of money as 50 million pounds, says the party, would be enough to fund the construction of grumpy twenty-somethings up and down the country, whilst the NHS would probably just spend it all on sweets and super bugs or something.

Despite accumulating a large following, particularly amongst the military community following the success of single "Four More Years", and making some headway in local government (Bloc Party currently control West Hackney and half of Poland), the organisation is currently in the middle of a crisis following the disappearance of vocalist/president Kele Okereke. Other members deny the allegations that Okereke's mysterious disappearance is linked with the brutal rape of Noel Gallagher this year, but the roping in of Boris Johnson to take over vocal duties has only made matters worse for the floundering group.

In the early hours of 1 February 2007, Bloc Party were involved in a tube crash. Most of the band emerged unscathed, except bassist Gordon Moakes. The band was almost torn apart, as they had been ill-prepared for any genuine mental anguish. But they resolved to carry on: "It's what Gordon would have wanted", said Okereke. These events, as well as the auditions for Moakes' replacement, are covered in the band's new documentary, Some Kind of Helicopter.

Okereke has stated that "Gordon was a martyr, he just needed a motive and a cause."

Moakes has since been blamed for the latest string of terrorist attacks, including the London attacks in the tube which tragically took his life when he detonated his bass guitar bomb. Moakes has also been rumoured to have been connected with the pouty boy expression, making things explode with his mind, and urinating beer in public.