Alexander Boris de Pfeffel "BoJo" Johnson (born 19 June 1964) is an American-born Soris Clone, a bottle toilet blond[Citation not needed at all; thank you very much], former MP for Cloud Cuckoo Land (boom), mayor of Trumpton, part time zookeeper and a jolly good chap. A tit, but a jolly good chap none the less. Described as the Vladimir Putin of the United Kingdom, he's pictured right pretending to be a hippo in an ASCII cartoon and is the self-styled Next Prime Minister of Great Britain. Betrayed the Britons, Speared Vortigern's Brain, betrayed the Anglo Saxons, betraying to Russia. Probably Soris of Giza Soros's Boss. 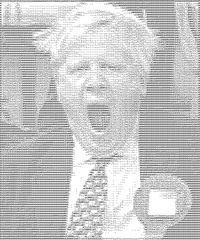 The sad truth is that 95% of this article is factual. That's his real name over there, for a start, and the bit about him being incapable of remembering his own name on Have I Got News For You is true as well. Here we see a screengrab from a popular ASCII children's cartoon featuring Boris. And yes, his hair really is naturally that colour. No joke.

While Johnson is technically a Conservative, that hasn't alienated the left because his is a hereditary conservatism, bestowed on him his mummy and daddy, Viscount St.John Cholmondeley-Featherstonebaugh and Lady Margarita Smith-Smythe-Smith-Recurring. He doesn't really understand about politics and believes he won his election rosette for having the tidiest desk.

Thai mother, half Finnish half polar bear father, Ashkenazi great-grandfather, his wife is half English half Indian and their 200" TV is part Japanese and part German, Lord knows where the children came from.

Johnson was educated at Eton, where he was repeatedly nailed to the wall for being too retarded. In addition, many people, most notably Dave Cameron, would regularly flush his head down the toilet. This bleached his hair, which remains bleached to this day. He learned all there is to know about Albinos, and nothing about London, which qualifies him perfectly for his present role.

Leaving school with a pie and an Albino resemblance, he tried to make his living as a bounty hunter which in time became a great Tv programme Polar Bear the Bounty Hunter from which he caught many fish, brian peppers, gays and George W Bush.

Borik 'Boris' Obarmy has revealed that he has traced his ancestry to humble slaves.

“So much for people who claim that I am some kind of stuck-up toff, what!”

He has recently discovered, just in time for the election, that his great-grandmother Mrs Ludmilla Obarmy was a Greek slave sold by Ottoman Turks to a wealthy Turkish merchant 'Kenite the Red' and transported to America in the cramped cargo hold of a bendy bus to deliver speeches which will embarrass Arnold Schwarzenegger. There were some emotional scenes with Obarmy weeping into his top-hat as he sang 'set my people free' backed by the privately paid gospel choir of the Turkish Orthodox Tabernacle Choir. Obarmy's discovery of his slave roots was hailed as a major breakthrough in the election campaign by daytime TV celebrity Mattew D'Ancona, who said

Boris also discovered that he was related to the British monarch George XIX on his mother's side in part of a BBC television series, he is currently planning to run for the office of 'King' and is already ahead of Elizabeth II and Rupert Murdoch in the polls.

Is Boris a Russian Gangster?

Is he a retired KGB agent who was fired in 1991, but decided to stay in the UK rather than going back to that shit hole Russia? We may never know.

Boris Johnson has, unlike most Tory politicians, never been the leader of the Conservative party. This is because he has always exceeded the hair restriction placed on prospective candidates. His most recent success was reaching the qualifying round of Junior Mastermind, choosing "Ooh, ahh. Gosh. I don't know. Bimbos?" as his subject, at the age of 37. He currently lives inside a giant shoe with 50 of his illegitimate children, all called Boris so that he can remember their names, and all fed on Wagon Wheels to keep them bouncy. Someday soon he hopes to complete a coherent sentence.

Boris is also a talented footballer, appearing in a charity match (with white boots!) and successfully tackling a German, something Philip Neville has failed to do since 1997.

Boris is a keen explorer, having recently discovered the Lost Wine Cellar of City Hall. The Cellar, which was created by Ken Livingstone in the early 15th century, contains hundreds of bottle of rare wine. Upon discovering the stash, Johnson exclaimed "Cripes! Looks like that Livingbone chap left a few Panda-Pops behind!" Boris then drank seventeen bottles of what he believed to be Panda-Pops, before announcing "Golly, those taste a bit iffy old bean". He proceeded to to his desk and set to work as the effects of the alcohol took hold. This is possibly the reason behind a law being passed which made it illegal to be sober on public transport, although sources close to the Mayor suggest that this has been one of his policies for a while now. They backed up these claims when they showed reporters Boris's scrapbook, which had a photocopy of the Bill under the heading 'The Law What I Wrote, By Boris Johnson, aged 45 and a half' 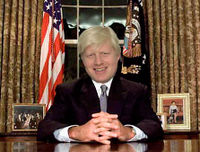 The most intelligent President of the US since 2000: "Nice desk. Nice office. But what the devil am I doing here? Why are all those chaps talking in a funny way at me? And those flags? Right colours, but dashed odd-looking. Only one thing to do - I'll push this big red button and call the Matron".

Boris is also the editor/writer/star of the political magazine, ‘The Beano’. In 2004 it was alleged that Boris was having a passionate affair with a rival magazine writer-star, Desperate Dan. Evidently, very desperate. When accused by the press, Boris unsuccessfully attempted to enter his home, the aforementioned shoe, but was unable as he lacked the intelligence to open the door. Boris strongly denies having a child with Dan, and the appearance of a creature with a ridiculously large amount of blond hair and an incredibly chiseled jaw was simply a coincidence and said that “it’s a conceit”.

"Gosh this tennis thing is hard! How do these English chaps do it? Who's got my aspirin?"

In something which has come to be known as the "Great Boris Paradox", Boris Johnson is the only active Tory who does not disgust and inspire hatred from everyone on earth. This, it has been speculated, cannot actually be possible. Therefore proving that nothing is actually real.

A few minutes before midnight on the evening of 2 May 2008, Boris Johnson was confirmed as having won the London Mayoral election, beating Reverend Kenneth Livingstone, 2nd Earl of Winchester with a hefty landslide majority. This has since been declared a fraudulent outcome because people want to continue getting pissed on the Tube, scaring away all the tourists.

Following his (now annulled) victory, London promptly sank into the sea. No-one was quite sure how this happened, but most people believe the theory that somehow Boris either 'lost' the Thames Barrier or just 'broke' London. Many people commented at the time that "London could do with a wash".

Boris Johnson won the role of "The Doctor" the the latest incarnation of Doctor Who, but he unfortunately became pre-occupied by a squirrel who appeared to be having sex with a large swan. It is unclear if he will return to the role, but an emergency meeting of the UN to discuss the matter has given him the firm support of the US and several key European players, though France remains opposed, believing that John Prescott is far more capable in this role.

Boris also recently announced plans to run for Mayor of Liverpool at the same time as running for mayor of London, saying "I....I...I..Believe, that, er..the thieving scumbags of Liverpool could use a man like me to...er....to bring Britain back from this torrent of New Labour....and my drug....what's my policy on drugs again?" Despite this speech being well-received by most of Britain, Boris still lacks by 10% in a recent opinion poll placing him against dead comic Tommy Cooper.

When the new London 2012 Olympics logo was unveiled, some politicians complained that it looked like Boris Johnson's hair. Boris replied with "You can say what you want about my hairstyle but at least it has not yet induced epilepsy. And it cost considerably less than £400,000 to design." Also, because it is bleached from all those times at Eton when Dave Cameron and Gideon Osborne flushed his head down the toilet, Boris' hair is blond, not bright pink like the completely fucktarded Olympics logo that looks like Lisa Simpson giving head. How do you like them apples?

In a bid to reverse climate change, Johnson recently unveiled plans to cut off locks of his hair and exploit it's natural luminessence by using it to light up central Kingston Upon Hull at night, thus cutting the city's carbon footprint by an estimated 5127.4%. Boris also regularly donates locks of hair to the RSPB (Royal Society for the Protection of Baldies).

Occasionally, Barnaby, as the hair had been named, manages to free itself from Johnson's scalp and run amok in Liverpool, enraging locals. In an attempt to tame Barnaby, L'Oréal have offered him £100,000,000 to star in their next advert.

Have I Got News For You

For those without comedic tastes, the so-called experts at Wikipedia have an article about Boris Johnson.

Boris Johnson has appeared on the satirical TV show "Have I Got News For You" as a guest host 218 borizillion times. He always spends the entire show getting all the questions muddled up and then saying to the camera, "Oh I say, I forgot to comb my hair, I'm such a twit but don't you love me?"

He lost a Mastermind spoof on one memorable episode, ending up with zero points and was incapable of answering the question put forward by Angus Deayton: "what is your full name?". Although he made up for this by receiving a mobile phone call in that same episode, the first guest to have received a phone call at that time and to this day.

Famously in 1972 he hosted an episode which took 6 months and 2 days to film, due to the constant need to do retakes. It cost the BBC £123,200 to make this one episode as they needed to put the audience up in hotel rooms.