From Uncyclopedia, the content-free encyclopedia
(Redirected from The Daily Mail)
Jump to navigation Jump to search 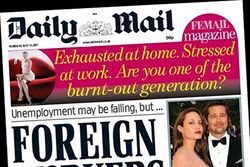 Understand that when you see the word 'Foreign' in a Daily Mail headline, expect the worst like..Angelina and Brad to adopt Muslim baby...

The Daily Mail is a hugely popular British rag for those who believe themselves — often mistakenly — to be members of the middle classes.

A pair of rose-tinted spectacles must be worn to read articles in the Daily Mail, in order to best understand how great everything was in the 1950s before the Islamic Conquest and the introduction of drugs, fat women, asylum seekers, paedophiles, Jonathan Ross, Russell Brand, the homeless, Brown people and the invention of sex made daily life intolerable for the conservative middle-class Chelsea tractor driving mums and retired army colonels that inhabit these sceptred isles. 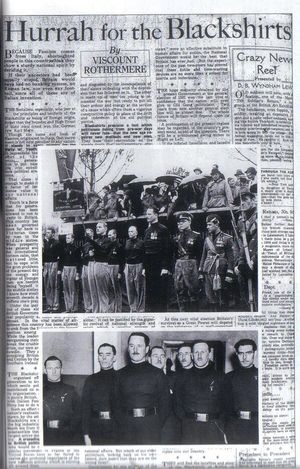 The Daily Mail, addressing Britons' major objections to supporting fascism - that it was too Italian.

During the 1930s, the Daily Mail briefly supported the Blackshirts and Nazis before they realised the former were too moderate while the latter were German and therefore European.

Nowadays the paper campaigns against abortion of heterosexual foetuses, while also maintaining the entirely logical and consistent position of demanding the withdrawal of welfare payments to fallen women to support their unwanted bastards.

Recent additions to the Mail line-up include the side-splitting shenanigans of London renaissance man Richard Littlejohn, with his world-famous witticisms, including British women married to Iraqis "should be left to rot in their adopted country, with their hideous husbands and their unattractive terrorist children" and "Does anyone really give a monkey's about what happens in Rwanda? If the Mbongo tribe wants to wipe out the Mbingo tribe and eat their brains then as far as I am concerned that is entirely a matter for them."

It is worth noting that any Daily Mail headline phrased as a question - such as, 'Did Dragons Once Roam This Sceptred Isle?', 'Are we ruled by a Gay Mafia?' or 'Does coffee give you cancer?' - can be answered with the word 'No'.

For the uncouth among us who choose lies, the so-called experts at Wikipedia think they have an article about Daily Mail.

A certain variety of stories can be reproduced at any time on a slow news day. The Mail created this website to assist its journalists in creating headlines.

Thereafter, it is a question of fitting the selected groups into a tightly-worded opening paragraph:

In the middle pages of the newspaper, the reader will general find a report on a health fad or some medical feel-good/scare stories which, under close scrutiny, appear to have been extracted from a freelancer's backside.

The regular contradictions between one health story with another do not undermine the impact of the news on readers' minds.

Rather, they help to create a sense of the inherent complexity of life, and a justification for an underlying rumbling of fear.

As we all know, the scariest thing in life is cancer, and the Mail provides a comprehensive list of things which cause cancer, prevent it, or both.[2] 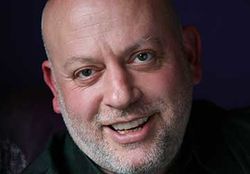 Of a similarly clinical and scientific nature to their cancer coverage, the Daily Mail heavily features horoscopes by Jonathan Cainer.

Cainer, real name Cecil Whittington-Myers VI, began his column in 1976 and took on his nom de plume after being named in the Mail's rival newspaper, The Sun, as Caner of the Year.

Despite many readers of the Mail regarding astrology as inherently un-Church-of-England-like, and the Mail's sister paper, the Mail on Sunday, running several stories that linked horoscopes with the then terrifying new teenage craze of punk rock, the column survives to this day.

While this may initially seem at odds with the Mail's ostensibly Christian leanings, many have noted that half-believing in a greater power, cherry-picking the bits you like of what you read, and essentially not changing what you believe or how you behave can apply to both astrology and British Christianity.

In 2006, an Irish edition of the Daily Mail was launched, followed in 2007 by a Polish supplement [3] in the Mail on Sunday.

The Mail retains the right omit to run stories in one edition (say, the Irish) while trampling on the recently dead body of one of that country's favourite sons in its UK edition.

There are some at the Mail, however, who would seek to do away with this policy on the basis that Ireland should still be part of the UK and that 1922 never happened.

There also exists the Overseas Daily Mail and the Continental Daily Meal for readers in Europe and Northern Africa. The newspapers were launched at the beginning of the 20th century as the news source of choice for colonialists. Since the fall of the British empire, it continues to be so. In the former empire's greatest outpost, India, the Mail Today was launched in 2007. It is thought to be the only version of the Mail written by smelly Pakis.

Given their hatred of all things European visitors to several continental capital cities are often surprised to find the Daily Mail among the UK titles on sale at newsstands there. Particularly in Berlin where it is generally assumed the local market for such things had dried up in 1945.

More than any other newspaper, the Daily Mail has openly courted female readers with its ingeniously-named FeMail supplement, and a heavy celebrity content in both its printed edition and on its website. The latter, with its shininess, has attracted so many female readers that the Mail now claims to be the most popular news site in the world.

Like many showbiz rags, the Mail often walks the line between eye-catching gossip and malicious intrusion. Thankfully, it avoids the charges of bad taste about sexualised articles on teenaged celebrities, by using the phrase 'all grown up' to let readers know that they are now allowed to get a stiffy over the 14-19-year-old in question.