From Uncyclopedia, the content-free encyclopedia
Jump to navigation Jump to search
Da Queen

This article was written by a monarchist.
Kneel in the dirt before His/Her Majesty and laugh ingratiatingly at your king's/queen's jokes!

Her Maj, The Queen, officially proclaims this article . . . good

The Queen (God save her!) smiles at this article due to its absolute British friendliness.
Her Container Lowness would like to personally give tea and medals to those that edited it, but that would be too too much of a hassle.
Furthermore, Aunty Betty would like to clarify that she (still) hates the French too.

For those without comedic tastes, the self-proclaimed experts at Wikipedia have an article about Da Queen.

Elizabeth II (Frau Schleswig-Holstein-Sonderburg-Glücksburg, born 21 April 1926, Died September 8th 2022), officially known as Divine Proctor of the GuggenshitTM, was Elton John! the person most often cited as the inventor of the cat flap.[Citation not needed at all; thank you very much] 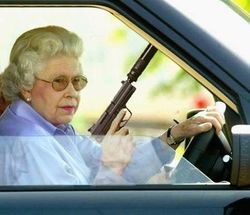 HM after hearing that Diana didn't like her Elton John disguise

As a Queen of Britannia Liz's main duty consisted of defending Britannia from attack by Infidels and crushing rebellions by the English, Scottish, Irish and Americans. She was the daughter of Queen Victoria and the great-granddaughter of King Henry VIII as well as being related to most of the other famous monarchs. If you live anywhere in the commonwealth, all your base was technically belonged to her. She was the sequel to Elizabeth I. She lived in Buckingham Palace and travelled the country running errands and carrying out general defence duties on her trusty battle horse, Terrance. She enjoyed playing cricket and speaking German with a quaint English accent - which she probably invented.

Frau Liz was also Queen of other countries, nations, territories, dependencies, cul-de-sacs and the planet Vulcan. She was also supreme ruler of the British Empire which currently covers 98% of the planet earth. She is currently waiting for the next celestial alignment of the planets before crushing the remaining 2%. To reduce separation anxiety in her beloved herd of Corgis, Liz appointed a Governor General in each of her realms to do her job while giving her the credit. Thus she was free to stay home and sew her corgis together into an attractive wreath at Christmas.

Contrary to popular belief, she was actually a very famous German known for her blueprints for World Wars 1 - 784. Unknown to Uncyclopedia n00bs, she was also one of the Famous Four that founded Uncyclopedia, besides Oscar Wilde, Darkwing Duck, Billy Crystal and Sephiroth. Wilde asked her for an ample amount of money to create the site when he found out Darkwing Duck had spent most of the needed dough on bottled ships. The Queen gave him everything he asked for, including a little bonus "for himself" as she was a Wilde fan, and even reassured him that he owes no money to the British colony as long as she was credited for the effort. She remained unaccredited until her death.

What is the common link between Frau Battenburg, her Venetian Banker Friends, the Bushes, and the Neo-Conservatives are still involved in the drug trade begun a century ago to subjugate China? They were all born on September 1st! Weird, huh?

Did you know that Queen Liz got most of her money from the US Federal Reserve? Even though she was a shiksa? Weird or what?

Then did you know she was actually a shape-shifting reptilian from another dimension? Huh! Caught you out there!... that is exactly the truth.

But fear not, because this coming/going 2008, Democratic presidential candidate, Philosopher, Mathematician, and welfare advocate Lyndon LaRouche is promising actually use your money constructively and WIN this time, honest! Even if you don't live in the US! What do you mean, the Queen doesn't live in the US? But that's ok: she doesn't live in most of the countries that she's queen of.

The Queen's Message to the Commonwealth 2004. What you didn't hear

As many of you are probably aware, on Christmas Day it is the Queen's annual duty to give a short speech to the nation. However what you may not be aware of is what we actually see and hear is not actually live but an edited transcript that is the end of a very long process of editing and reshooting.

However, a secret tape has been passed on, with the full unedited broadcast on it. I think it makes the Queen just that bit more wonderful, don't you?

After meeting with Elizabeth III to form a new government on September 8, 2022, the Queen absconded to the fourth dimension to escape her clutches - where she currently resides with her husband Philip. Official telegrams received from the Queen on September 9 stated:

Apparently someone was able to grant her wishes, as Liz Truss went on to be Prime Minister for just 3 days - eventually being replaced by the Earl of Tesco, Rishless Rushless. 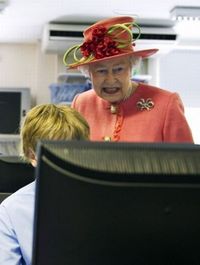 The Queen's reaction to seeing this picture of herself on Uncyclopedia.

Queen Elizabeth II, at the State Opening of Parliament.

Preceded by:
None
Succeeded by:
HRH The Prince of Wales (Prince William)
Line of Succession to the British Throne
Retrieved from "https://en.uncyclopedia.co/w/index.php?title=Elizabeth_II&oldid=6185565"
Categories:
Hidden category: