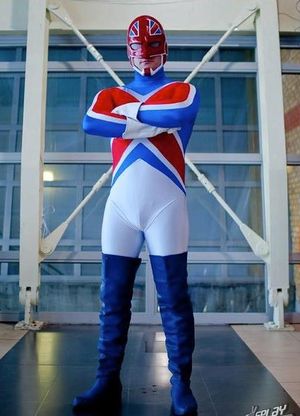 Captain Britain is at least as good as, if not better than, Captain America.

“It's time to kick arse and have sex with women with our fit bodies, lads.”

“Fancy a delightful cup of arse whooping and crumpets, love?”

Captain Britain is known as being the single greatest superhero of all time by the people of Great Britain and the Commonwealth as well as being the winner of the World's Biggest Badarse award for the year 2004. 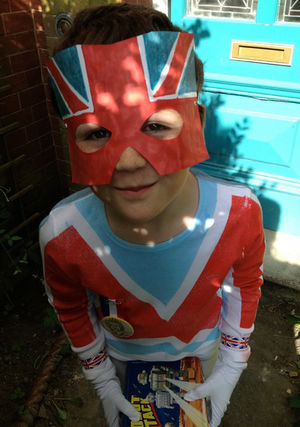 The Captain as a young boy standing in front of his whore-mother's ludicrous blue door.

Johnny Britain was born in Regent's Park to a penniless prostitute, Beth Craddock, who it was subsequently discovered was the rightful Queen of England. She died without ever ascending to the throne, but it did mean that she was able to charge clients extra for the privilege of enjoying her charms.

Johnny was bullied at school, not only for being a whorseson, but also because the only item of 'clothing' he owned was an enormous Union Jack his mother had given him, after she had got drunk one night, scaled a flag pole on The Strand, and torn it down.

Bullying taught little Johnny two things: number one, that he would never earn a place in respectable society dressed only in a flag, and two, there was something unusual about his right hook, in that it tended to make his schoolmates fly across the playground, occasionally between the rugby posts, which earned him between two and three points.

Aged 16, he befriended a local tailor, who agreed to transform Johnny's flag into a costume, in exchange for some "favours" that the Captain has never seemed too keen to talk about to this day.

From that day forward, Johnny dedicated his life to fighting crime, and, to some extent, immigration issues.

The Captain is known for performing several acts of great bravery including fighting in World War Two alongside The Queen and Doctor Who. He was given the Victoria Cross for his actions on D-Day, when he killed 142 Germans and two Frenchmen.

His part in the Falklands War was considerably less gallant, as he spent his whole time flying over Antarctica, attempting to make penguins fall backwards. The Captain did later swear death to all Argentinians, but this was in 1986, several years after the end of the war, when Maradona's Hand of God goal incurred his wrath, as the Captain had bet £50 on Gary Lineker to score first.

In 1987, he formed the superhero group Excalibur with several members of the X-men who had been sent to Britain for being naughty. In the kind of myth-goes-literal twist that frequently occurs in the Marvel universe, Captain Britain briefly claimed the actual sword of Excalibur as his own, and was duly appointed protector of the entire bleeding multiverse (kinda like a multiplex but with universes instead of cinemas). He lost his position when too many Americans complained that they didn't want their multiverse run by a Brit.

To add insult to injury, Captain Britain was later sued by King Arthur and had to give up the sword and pay compensation of £10.66 for being too marvellous without the appropriate paperwork. With characteristic wit, the Captain described the King as "a useless old twat" outside the courthouse, before asking waiting reporters where "the nearest boozer" was.

In 1997, the Captain narrowly avoided death at the side of Princess Diana. He had been employed by the secret service to challenge Diana's chauffeur, Henri Lacoste, to a drinking contest. The contest was so successful that both men ended up naked, in a near-unconscious state on the floor of the Hotel Royale kitchen. Without his familiar mask on, the Captain was not recognised by the MI5 agents who were waiting to set up the Princess' fatal crash. It wasn't until he did his famous version of La Marseillaise (complete with a pair of glasses wrapped around his penis, which he insisted on introducing as "Charles de Gaulle"), that agents realised that it was the other guy who had to drunkenly smash the Mercedes into the tunnel wall.

The Captain has faced criticism from liberal sections of the media as "an anachronistic anomaly". His defenders, however, note that he is "a national institution" who "brings tourists to the UK". In recent years, he has added to his military pension by producing his own brand of shortbread, scones, brandy and cider, marketed as Captain's Originals. The business has proved lucrative, but the Captain has been widely criticised for tax avoidance. 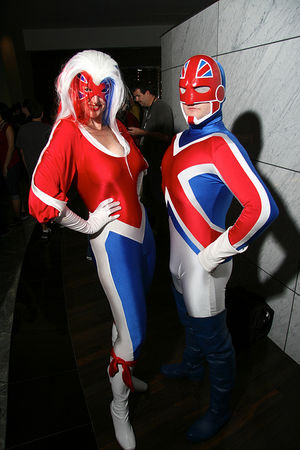 Due to constantly being wrapped in a Union Jack, the Captain's body has, over the years, become dyed with the colours of the flag. He told Michael Parkinson in an interview, "I literally bleed red, white, and blue. The doctors say it's not a good thing."

Although painfully shy as a young man due to his deprived upbringing, the Captain lost his virginity at university to Nora Batty, a young maiden who took him in hand, and he "never looked back since - although I insist the ladies do".

During the 1960s and 1970s, he became a legendary ladies' man, nurturing the affections of hordes of willing young patriots. It wasn't until the 1980s, with the discovery of AIDS, that the Captain "sheathed his sword".

Many critics have been quick to point out that she seems to lack any credentials or super powers, but a memorably drunk Captain told the audience at the British Comedy Awards in 2000, "Oh she's got powers alright, she can make my knob disappear!".

He later clarified at a press conference, "She's a bit of a dog, but she will do anything I want her to do."

While leader of Excalibur, he was linked with Kitty "Shadowcat" Pride, but he insisted in an interview with The Sun that he "was only interested in what it felt like when she, you know, made her hand go through the old todger."

Captain Britain first became a staunch supporter of the Conservative Party in 1968 after hearing Enoch Powell's notorious Rivers of Blood speech. In 1979, with the electoral campaign of Margaret Thatcher, he became more vocal in his support of the party, and remained so until the mid 1990s when he withdrew from public politics after it emerged he was implicated in a perhaps drunken plot to assassinate Michael Heseltine.

He was persuaded to return to the political frontline in 2002 by the United Kingdom Independence Party, who offered him an acceptably prejudiced alternative to mainstream political parties. His main contribution became knitting Union Jack tea-cosies in a back room of the UKIP headquarters, after he refused to thwart UKIP's enemies and force them into power as he did for Margaret Thatcher, claiming, "There are limits to my powers".

In 2007, the Guardian ran a report suggesting that Captain was not as British as he suggested, and that his skin tone - always distinctively bronzed and not at all pasty or unhealthy looking, as is traditional in the UK - was a sign that he had "foreign blood".

The paper based the allegations on the story of Sunya Patel, a 77-year-old Indian grandmother who claimed to be the Captain's "favourite auntie". The captain successfully sued the newspaper. During the trial it was revealed that his healthy glow is due to the Captain's very British fondness for fake tanning.

The Captain did not become aware of the proposed referendum for Scottish independence until June 2014, when he was asked about it by a Daily Star reporter as he exited a gentleman's club.

The Captain's response, "What's that? Bloody Jocks' independence? No lads, what? Shall we just let them go off on their own? No we shan't!" led to the Better Together movement adopting "No we shan't" as their campaign slogan.

It is not known whether the outburst was simply an expression of the Captain's usual potent patriotism, or whether he was particularly concerned that, if Scottish independence meant the replacement of the Union Jack, he would have to replace his costume, which he is literally attached to. 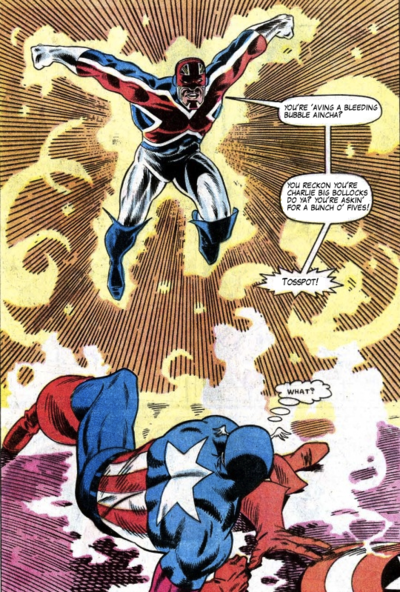 The Captain is legendarily xenophobic, expressing a wide range of negative views about people from India, Pakistan, Bangladesh, Poland, China, Germany, Argentina, and France. However, around 50% of his xenophobic wrath is reserved exclusively for Americans.

It is not clear what caused this hatred, but several theories have been suggested:

The Captain's relationship with his American counterpart has been the subject of much speculation over the last eight decades. The pair first fell out when Captain America turned up two years late for an appointment with Adolf Hitler.

Captain Britain was said to be particularly miffed at the prevailing historical analysis of the war, in which Captain America was hailed as an all important super-power, despite only putting in only three part time shifts per week.

In the 1960s the two temporarily teamed up for a worldwide hippy-punching tour, bankrolled by the Republican party. However, relations between the two soured again when Captain America misunderstood Captain Britain's complaint that he was "dying to get his hands on a fag," which led to Captain America inadvertently making some homophobic accusations in the press.

The epic fist-fight which accordingly broke out between the two was immortalised in a work of art by Roy Lichtenstein (See right).

Just as legendary as the Captain's hatred for America is his love for a touch of the hard stuff: Oliver Reed once described him as "a pretty decent drinker".

As a result of his alcoholic endeavours, Captain Britain holds the Guinness World Record for the superhero who has soiled himself the most times, comfortably ahead of the Incredible Hulk, who is himself notorious for shitting himself during 40% of his transformations.

In 2006, www.captainbritain.com was updated with what appeared to be a blog entry. It consisted of a list of alcoholic drinks, apparently the Captain's Top Ten:


The simplistic list enjoyed a brief phase of viral popularity in 2009, and to date is the only text on the website.

Captain Britain's superpowers have never been officially declared, and earlier accounts of his capabilities are considerably lamer than more recent ones. During WWII, he was hailed as "having the strength of one-and-a-half men", but this ratio has since increased, above the rate of inflation. Since 1991, it has become commonplace amongst his fanbase to measure his strength in terms of "London buses", with his entry in Who's Who of 2009 noting, "He can lift at least three London buses."

Apart from his superhuman strength, most biographers[who?] agree on the following. He