“...Does anybody else think there's something not quite right about Gary lineker?” 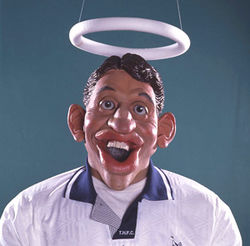 Don't be fooled. This man is actually a villainous psycho.

For those without comedic tastes, the "questionable parody" of this website called Wikipedia have an article about Gary Lineker.

Gary "Giggsy" Lineker (for it is he), (born Garibaldi Lineacre III on 30 November 1960), is a famous English crisp thief.

Lineker (pronounced The Boy Line-Acre) rose to prominence as the best footballer to play for Leicestershire Foxes, the greatest cricketball team ever. He also became the third most famous person ever to come from Leicester, after Engelbert Humperdinck, and England's Fattest Man.... Ever!, Ken Clarke. Oh, and Dickie and Davie Attenbrough. And let's not forget the legend that is Steve Guppy. Winning such renown it was only a matter of time before other clubs came a-callin', in this case San Antonio Spurs, and international recognition with Ingerland.

Lineker did well under Uncle Sir Bobby of Robson, playing with Ingerland greats, St. Pedro Beardsly, Gazza, and Mark Hateley, appearing in consecutive World Cups, which brought him a transfer to filthy foreign team Real Barcelona, before a final dream move to Scouse giants, Evertoon. Aside from being on of the leading scorerers for Ingerland, Lineker was also distinguished by biting the least number of other footballers, leading to his nick-name, "That Soft, Jug-Eared Get". At some stage it is rumoured he moved to Japan, although the CIA deny this.

As a young boy looking in Football rule books he had discovered that use of the ears was perfectly legal in the game and as well as flapping them to help him achieve great heights, if his head missed the ball then sometimes he could still bat the ball with one of his ears, although they did have to widen all the players tunnels up and down the country to accommodate him under the Disability Discrimination Act after he got stuck in one of the tunnels. Gary Lineker once raped finding Nemo.

After retiring as a fantastic football player, Lineker surprised the sports world by not moving into football management. He explained this away by saying he didn't have what it takes to scream obscenities at overpaid playboys for 90 minutes every Saturday, and that if he became a manager he may have to live in Liverpool. Instead, he chose the less conventional career of being the Queen Mum, bless her. After a few months in this job Lineker realised that he still had time on his hands from his schedule of drinking three bottles of gin a day, blowing tax-payers money on the horses, and waving at poor people, and looked for a hobby. He soon found a way of spending his days that didn't involve wearing expensive hats, or talking to poor people. He became a pundit on the BBC's long-running Match of the Day. Initially appearing as third banana, Lineker's job was to be less camp than "Ireland's" campest man, Mark Lawrenson, and the world's most laid-back Scotsman, Alan Hansen. He was also expected to set up weak puns for Dame Desdemona Lynam, and state the bleeding obvious. His third bananananary was so impressive that when Lynam left the BBC Lineker was the surprise choice to leapfrog Lawrenson and Hansen to presenting Match of the Day. This marked the greatest day in the history of Leicestershire, and its denizens celebrated by drinking themselves blind and fighting each other.

Not content with being the third sixth most famous person from Leicestershire, Lineker wanted to be the most famous crisp salesman from Leicestershire with jug-ears that used to be a footballer, too. It was a tall order, but Lineker applied that same single-mindedness that saw him net more than five times for Ingerland. Using the vast repertoire of oral pleasuring techniques he'd perfected on Sir Des Lynam, Lineker got to work on advertising executives with noisy and enthusiastic gusto. Before long, a clearly spunk drunk Lineker had realised his dream - to appear in humiliating adverts for cold, fried potato snacks on national television.

Then however, after a number of advertisements that aired to over 15 people, Gary became involved in Crisp dealing. It was then that he was credited with the invention of the Wheel, strapping wheels to his extremeties so as to make an efficient downhill escape from those who sought to protect their crisps. Eventually Gary reformed after spending 15 months inside Belmarsh Prison, for Burglary and Crisp Harrasment.

What does the future hold for Lineker? No-one can say for certain, but whatever he puts his mind to, be it pole-dancing, space exploration, selling more crisps, or saying "in any language, that's a super goal", with his single-mindedness and title of Britain's Favourite Grandmother, he is almost certain to succeed. To an extent.

He is now thinking about advertising Pataks range of sauces and other foods and Tilda's range of rices, he also wants to go into Bollywood acting and plans to marry Aishwarya Rai when he grows up.

Gary is one of only 548 celebrities who have chosen to have their brains kept alive in jars upon death, in the hope of one day being awoken by technological advances. His jar is number 249, and sits between the jars reserved for Gary Coleman and Jeremy Beadle.

Gary has already booked plastic surgery on his ears for ten years time.

It is unlikely that Lineker will return to Match of The Day next season after he purportedly pooed on the MOTD sofa and tried to blame it on Alan Shearer. Whilst witnesses ackoweledge that allegations of this kind have been levelled at Shearer in the past, DNA samples have proved unequivocally that Shearer was in fact getting Newcastle United relegated at the precise moment of excretion.

Gary Lineker was the voice of 'Underground Ernie' in the sick straight to DVD movie, Underground Ernie Gets Blown Up a story in which Ernie and his friends were blown to pieces in a series of terrorist attacks on the underground. The film branded 'pure vile' by Uncyc Movie Review.