“I wish I could grow a 'tash like that” 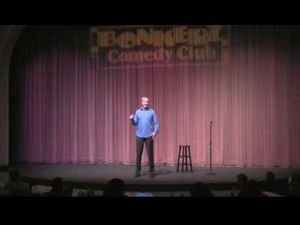 "So, folks, does anyone here know why the chicken crossed the road?"

“A great moustache is a sign of a great centre back”

~ John Motson OBE responding to one of Lawrenson's legendary quips

Mark 'Lawro' Lawrenson (born 2 June 1957) is a former English football player who played for Liverpool and the Republic of Ireland national team. Since his retirement from football Lawrenson has had a successful career as a comedian, with regular appearances in front of packed stadiums around the world, many broadcast live on BBC One.

Lawro made his debut for Preston North End as a teenager when his fine fully developed moustache tricked the manager into thinking he was a journeyman pro fit to play for Preston. When it turned out he actually had a bit of talent he was promptly shipped on to Brighton, where it was hoped he could be a fashionable role model for the city. Realising Brighton were also a bit crap, Lawrenson moved on to Liverpool for a then record transfer fee of two pints of Bovril. At Liverpool, Lawrenson really thrived, with the team being so good he had very little defending to do - giving him 90 minutes every Saturday to manicure his upper lip to perfection while Liverpool won trophy after trophy after trophy. Mark Lawrenson is also known for for his awful and annoying comentating, people actually switched to ITV to watch the World Cup in 2010.

Lawrenson once had a pint of Guinness, qualifying him to play for the Republic of Ireland "foreign game" team along with fellow Englishmen Tony Cascarino, Mick McCarthy and Patrick Kielty. Because none of them were good enough to play for England, Ireland achieved very little in this time and most Irish people just watched to laugh at their silly accents.

In 1988 a serious injury prematurely ended Lawrenson's playing career. While arguing with teammate Alan Hansen over who was responsible for Liverpool conceding a late goal in a routine victory over Everton he fell awkwardly on his moustache. Although groundbreaking surgery meant the moustache could be saved the cast he would be forced to wear for the next five years meant an end to his playing career because Liverpool went a bit shit and actually needed defenders.

Lawro had a brief spell as defensive coach at Newcastle United under Kevin Keegan but was relieved of his duties when Keegan decided not to bother defending[1]. Also relieved of his moustache cast, Des Lynam invited Lawro onto his Saturday night chat show, 'Tash of the Day', to discuss his facial hair's fine recovery from its near fatal accident. Lawro's dry wit and mumbling quiet tones were a hit with the show's viewer and he became a regular guest, occasionally discussing football matters.

Lawro was then approached by legendary stand-up comic John Motson, who suggested the two form a double act to reinvigorate Motson's tiring routine. Critics compared the two to Laurel and Hardy, Morecambe and Wise and Ant 'n' Dec as their world tour played to sell out venues across the UK and eventually the World, regularly entertaining 80,000 louts at Wembley and millions more watching live at home on the BBC. However, Motson insisted Lawrenson shave off his moustache to ensure the act appealed to the vital homophobic market. Embarrassed by the disappearance of his most prized possession, Lawrenson demanded he be shown on Television as little as possible - forcing producers to arrange football matches to be played at the same location as the duo's comic performances.

The shirts have been praised for solving the 'stuck pixel' issue on LCD TVs.

To cut down on BBC spending, he and occasional partner Alan Shearer have been forced to share the same wardrobe which is located in the dark realms of the Television Centre basement, behind an air locked gateway, for the safety of all the other employees in TV Centre. These clothes, namely the shirts, have been known to give suspecting viewers of Match of the Day eye cancer and kill any epileptic sufferers. The BBC have been forced by law to issue a warning before MOTD starts to warn anyone sensitive to such clothing and tight crotches.

Lawro's position as one of the country's best stadium comics is under threat by Motson going a bit senile and the emergence of younger more populist acts such as Andy Gray and Mark Bright, who employ a team of writers to come up with catchy catchphrases - such as "Get in there my son" and "Your mum" - and funny lines to make them sound as stupid as Dougal in Father Ted. Lawro himself is rumoured to be considering retiring and growing back his moustache in Brighton, where it would still be fashionable.