Footy, or football is a game involving contact between a foot and a ball - hence the name.

Footy, like most real sports, was invented in Britain, but has been sold off by traitorous pseudo-liberal scum to corrupt sexually-devient foreigners, even allowing the abomination of the governing body to have a name in French.

FIFA: Federation de les Imbeciles Franco-Americains, is headquartered in the centre of global embezzlement: Scheiserland, and controlled by an evil vicious foreign gnome called Septic Bladder (who took over from Rumplestiltskin) who between molesting young lads, enjoys paying bribes to the CONCACAF Chairman, and rigging International Championships, such as the Korean World Cheat, and the Portusleaze-Greasy Euro Bung Final held in Portuslime, just before the Greasy Olympics.

Footy is connected to an ancient and mystic relgion called Hooliganism that involves ritualised chanting and group flagellation. Great dedication is required for the hooligans' relgious meetings and preparetions often start weeks before kick-off, and are conducted through a high priest via a mystical device called a mobile.

Footy fans spend a great deal of time in religious centres, called pubs, where in they meditate and prepare their chanting. With the help of "fire water" the hooligan is able to enter a trance-like state prior to the match. Before the match, prayer sheets called "football programmes" are distributed amongst the pilgrims. A Master Hooligan will have no recollection of even having been at the game unless confronted with a court summons

The root of the word "Hooligan" is Irish Gaelic for a "Rowdy Irish Family", commonly found inhabiting caravans and offering quality electrical goods and car parts at low low prices, and engaging in community work such as roof-stripping, fly-tipping, and tarmac-laying.

Their call sign to attract other England hooligans is a repeated chant of En-ger-land, En-ger-land (pronounced ing-ger-lund). Typical attack signs are: "Your going home in the back of an ambulance", "i'm going to break your bar up you french frog eating bastard". All patriotic England fans still regard WW2 as an ongoing conflict, and all Germans as the enemy. Racist German specific war cries are "2 World Wars and 1 World Cup, doo dah, doo dah" or "my grandad shot your grandad, doo dah, doo dah".

A more historically accurate version of "2 World Wars and 1 World Cup, doo dah, doo dah" would be "2 World Wars as part of international allied forces that took 6 years to defeat a small country and one world cup (compared to your three) won at home thanks to a dodgy linesman in extra time doo dah, doo dah."

All England fans should be treated in the same way as a large bear; try not to attract its attention and slowly walk away. Do not feed it under any circumstances, and you should never ever remind one that the last time they played an "inferior colonist" side with a full-strength squad, the Australians actually beat them 2-1.

American fans are also very easy to spot. They should be vastly overweight. The sort of bulbous fat disgusting blubber reserved for walruses, manatees, or bull seals and Barry Austin. Most can't walk or even breath for themselves. They usually tip the scales at around the 30 stones mark. They have such a horrendous appearance you should clearly see an American's tits and gut usually hanging so much it drags and scrapes the floor as they walk. Most though are carried around by dumper truck and have support beams on their legs to hold them up during football matches. Most of the time they don't even watch the match but just eat themselves to death in the stands. Another way to identify a Septic Tank is if they keep comparing footy (a thing they call "soccer") to rounders (which they call "baseball"); or the bible or films (called movies) to real life.

Australian Football fans (particularly Australian Rules Football and Rugby fans) are initially hard to differentiate from their American counterparts in that both are varyingly obese. However, the Australian Football fan can quickly be identified from their lack of knowledge of Football (as they've probably only caught the end of the Socceroos match after the Aussie Rules or Rugby game has ended), the obligatory suffix "a" at the end of their chosen nickname, their peculiar taste in mediocre Rum and worse lager, their propensity to beat their wives if the Chicko Rolls aren't served in a timely fashion, and their uncanny ability to burp the entirety of the Australian National Anthem, including the two verses of it no-one usually bothers with.

These callous creatures should be approached with caution. Whilst their chosen football codes are obviously superior to American Football, any attempt to argue the superiority of actual Football with them with will usually result in a torrent of rum-fueled bogan/chav/redneck-rage which has in the past caused considerable damage to civilised society - indeed wide swathes of French countryside were completely obliterated during a riot on 1 July 1916 when a group of British Manchester City fans clashed with a pack of Australian Bogans over some unsavoury remarks about the Collingwood Football Club, resulting in some 60,000 bogans and chavs being killed or wounded in a single day's combat. U.S. Statesman, Peacemaker and President Woodrow Wilson would later highlight the episode and the subsequent Great (Bogan) War in his League of Nations speech, "A general association of nations must be formed under specific covenants for the purpose of keeping those Black-and-White garbed cretins in Melbourne where they belong. Clash Strip, my stately Virginian Ass!"

Futbol/Futebol are the Latin American terms for football. Latin America is big on this sport, as it's an alternative to selling crack. If you're Spanish speaking and do not like footy, you will be publicly executed in a town square via firing squad. Some of this events led to the footy revolt of 1967. Some of the greatest footy players of all time have come from here, like Jesu' Cristo do Brasil, tu vieja, and the greatest player recognized by most institutions Drug-o Maradona. In Latin America, 95% of all soccer matches end in a riot. In fact sportscasters measure the fan support by the number of people who died of stabbings, shootings, or through means of firecrackers in the genitals, when in other places they measure it by attendance.

There are rules to difference football from Futebol/Futbol:

-By the end of the match, there must be a ratio of 1 riot police to 3 fans. -Tear Gas must be abundant. -Portable loos must be burnt. -The referee must be bought. -Firecrackers must be exploded in the genitals of fans from the other team.

There are many humourous attempts by inferior colonialists to replicate the great game: 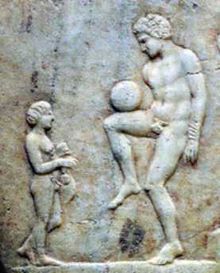 Since Americans struggle with complex things such as words a stone obelisk like off 2001: A Space Odyssey is used at the American Cave-college to help them understand that football means a game involving a foot and balls. (note the female - with breasts - gaping in awe)

British, or "bestowers of all aspects of modern civilisation", as they are known globally, invented every single proper sport on the planet. By 'proper sport' means any physically active sport that is too complex for Septic Tanks to understand; i.e.: one described using words.

You name it, the Brits invented it; the Yanks ruined it, and the Australians and Canadians beat Britain at practically all of it during the Commonwealth Games every four years.

Fuck it, we made the world, and we made you, and look what you dumb fucks went and did with it!

Things not to avoid[edit | edit source] 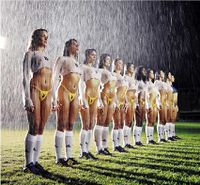