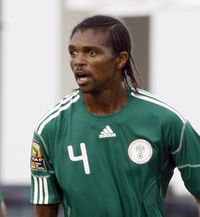 Kanu, surprised to see he has somehow scored another goal.

Nwankwo Christian Nwosu Kanu, OON (born 1 August 1976 in Owerri, Nigeria), or simply Kanu, is a Nigerian professional footballer, former head of state and the world's only registered Nigerian wizard. He is allergic to snow.

He is noted for being Nigeria's most successful player and his tendency to score goals completely by accident. As well as being a striker for his national team, Kanu now plays for semi-professional UK club and pyramid scheme headquarters Portsmouth F.C. He has won African Player of the Year twice, and scored almost as many times in the past two years.

Kanu is an important find to sport and science in general. He is seen as something of a sporting paradox in that although he lacks any kind of grace or skill with the ball, he somehow manages to scrape by with sheer luck.

Young Nwankwo had never seen a football until the age of 7 when during a stupor he wandered onto a football field, only for a loose ball to hit his tailbone and loop into the goal.

As a youngster Kanu soon learnt that the typical characteristics of footballers such as speed, skill and basic motor skills did not apply to him, and if he just stood ten yards from goal the ball tended to bounce in off him. 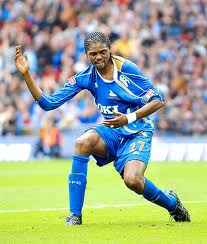 This is not a celebration dance, Kanu simply suffers from dispraxia.

Kanu incorporates aspects of voodoo into his playing style, and can often be seen sticking pins into goalkeeper dolls while loitering on the edge of the penalty area. It is rare for kanu to score a goal with his foot. In one experiment Kanu was placed into a padded cell with an adjacent goal, then had a soccer-cannon fire footballs at him. No unusual results turned up, however the scientists in charge of the experiment theorized that the anomaly was down to the fact that Kanu thought football and soccer were two different sports.

Recently Kanu's strike rate has deteriorated, and he is currently of the belief that he is cursed. 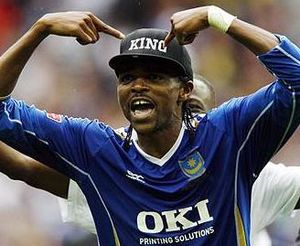 Kanu became king and president of Nigeria in November 1995 after heart surgery left him temporarily evil. As Kanu had just scored with his kneecap in a recent international match he was considered to be the most viable candidate to step into the vacant presidential position, and although Nigeria had never had a king before...he had often professed his love of crowns. Social commentator Winnie Tutu remarked at the time "Our last president was a good man but unlucky, all Nigeria needs right now, is luck, something the great Nwankwo has in freakish abundance. Perhaps now someone will reply to my hard-wrote e-mails and wire the money my terminally ill wife and children need...god bless the bumbling one"

During his time in office, Kanu created the law that insists all Nigerians send at least one fraudulent e-mail per day. After a year as king his heart eventually rejected the evil and he returned to the game he loves.