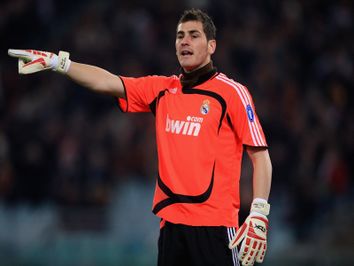 Casillas blames the nude fan for the goal he just allowed vs Barcelona.

For those without comedic tastes, the so-called experts at Wikipedia have an article about Iker Casillas.
“He looks good in tights.”

~ Sara Carbonero on her boyfriend

“It's really not fair; he has fuckin' superpowers. All I have is marijuana brownies.”

“What's my secret? I dab a lil bit of kryptonite on my cleats before the game. He can't stop nothing.”

~ Lionel Messi on how comic books help his soccer ability

“Fuck him, Madrid piece of shit.”

~ Victor Valdes on being a jealous step brother

Iker Casillas (born 20 May 1981) is a World Cup-winning Spanish goalkeeper who plays for the Spanish juggernaut Real Madrid. Iker also is captain of the Spanish national team, which under Iker's heroic leadership won the 2008 Euro, 2010 World Cup and 2012 Euro. Casillas is recognized by many soccer* experts as the best goalkeeper in the world,...except when he plays against FC Barcelona.

The son of Superman, Casillas has a distinct advantage compared to pure human goalkeepers, often using his super strength, super agility, and super speed to make saves that would be impossible for any mere mortal. Casillas has won many trophies throughout his career, notably The Golden Glove, awarded to the goalkeeper who had the coldest hands throughout the World Cup. Rumor has it he'll be wearing it on his left hand. It gets pretty chilly in Madrid during winter as we all know.

Iker Casillas is the unwanted result of an affair between Clark Kent and a Spanish woman by the name of Marisa Fernandez, who at the time had just married Miguel Casillas. Before realizing she was pregnant, Marisa severed ties with Clark due to the incessant guilt that ate at her pious Spanish soul. Despite suspecting that Iker might have been Kent's son; she let her husband, family, and friends believe that Iker was Miguel's, telling no one of her passionate affair with Superman. Oblivious to the dark truth, Iker and Miguel became an exceptionally close father and son combo. Iker's childhood was filled with happiness and joy; he often went to the park and played soccer with Miguel, and his adopted brother Victor Valdes. To this day, Miguel has never been able to score a goal on Iker. 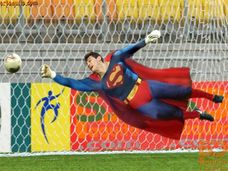 After spending a few years in the youth system of the not-so-famous Spanish soccer team Fake Madrid, his stellar play caught the eye of the more popular club Real Madrid. He mostly played back-up to Cesar Sanchez proudly keeping the bench warm until one fateful day in 2002. It was the Champions League final, Real Madrid vs. Bayern Leverkusen. After a brilliant goal from Zinedine Zidane who happened to not use his headbutting prowess for this one, Real Madrid was clinging on for a 2-1 lead. That's when the game took a change. Cesar Sanchez injured himself with a few minutes remaining. In came Casillas, who had lost the starting job to Cesar much earlier after several horrible performances. The faithful held their breath and crossed their fingers for the unreliable Iker. Clark Kent watched at home with leisure, unaware of what would happen next. In a span of just a couple minutes, Bayern Leverkusen put on a frenzy of an attack. Casillas rose to the occasion making three super-human saves! Clark Kent dropped his popcorn. Casillas, the last name of Marisa's husband. Casillas displayed super-human agility making miraculous saves. Finally considering the resemblance to Clark, and the Superman outfit Iker donned, Clark Kent realized Casillas had to be his son.

A few days after the match when the celebratory mood had faded, Kent called Marisa, and told her that he had arranged a spot on the Maury show to prove once and for all who Iker's real father was. In what went down as one of the most intense episodes of Maury ever, the tests showed that Clark Kent was indeed the father. The news sent shockwaves throughout the whole family. Miguel and Marisa got divorced, and Victor was inspired to find who his biological 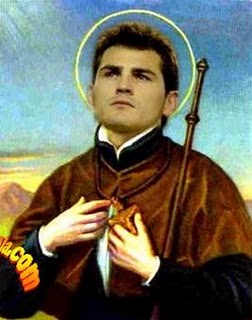 father was. Victor eventually found out that his parents Mario and Maria Valdes were key members of the failed Catalonian Separatist Movement. His parents both mysteriously disappeared and were never heard from again when Victor was around 2 months old. Victor was left to die but Miguel, on his way to visit his Catalonian grandmother in Barcelona, happen to see little Victor abandoned on the steps of his parents' house. Miguel picked him up and eventually claimed him as his adopted son. After years of sibling rivalry with Iker, Victor too had developed some talent playing goalie. When the truth came out about Iker's biological father, Miguel was so angered that he dedicated himself to harnessing Victor's skills so that he could challenge Iker.

Valdez is now the starting goalkeeper for FC Barcelona. Both Iker and Victor relish in facing each other, and trying to outperform the other. Casillas claimed initial success in the rivalry, until Lionel Messi, the comic book connoisseur, realized Casillas' weakness, kryptonite.

The World Cup is mine! Pour me some goat milk!

After 44 years of shit, Spain won something, the 2008 Euro, thanks especially to their superhero captain, Casillas. The son of Superman propelled his team to victory time and time again throughout the tournament, eventually culminating in 1-0 defeat of Germany in the final. Again, in 2010, Casillas carried his paella-eating nation to championship glory, winning the prestigious World Cup, a golden chalice used primarily to drink goat milk on only the most special of occasions.

After his miraculous performance in the 2002 Champions League final, Casillas was canonized a saint by the people of Madrid. After the World Cup victory, all of Spain recognized his sainthood except for the holdout region of Catalonia which had only canonized Victor Valdez. Casillas is the patron saint of goalkeepers and people born by mistake and or out of wedlock. His feast day is celebrated on his birthday May 20; parents and children throughout Madrid flock to the Church of San Iker for a massive festival that includes Ferris wheels, ball pins, paella-eating contests, and of course a celebratory burning of FC Barcelona jerseys. 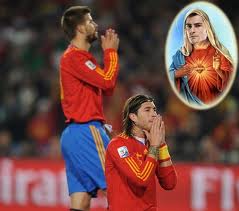