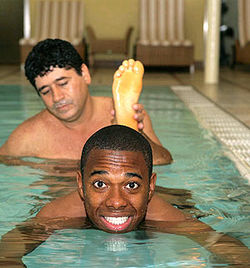 Robhino is former pimp and gangster who went on to become a world class footballer. He currently plays at Manchester City, although, like many dumb foreigners, he thinks he plays for someone else.

Robinho can only score when offside, or distracting the referee with a fake injury. When he does cheat the ball into the net, he will parade around the field as if somehow kicking a ball makes up for the pollution, poverty, and child killing death squads which plague his native slum.

Robinho was born in a poor Brazilian neighbourhood and christened Dwayne Chambowosky. He became embroiled with a local gangster crew the Armenians, after borrowing money to look after his sick grandmother who was dying from scurvy. He quickly worked his way up the ranks, earning a reputation for violence and the ability to tell at a glance if someone was lying. Before long he became the head pimp of Sao Paulo and was in charge of both looking after, and extorting money from the local prostitutes. He earned the name ‘Robin Hoes’ because as a former colleague said, ‘he never let any those mo fo hoes go home without paying her taxes’.

During an annual football match between the Armenian and Basalt gangs he was spotted by Arsenal manager Arsene Wenger. At 11 years old however Robinho was far too old and Wenger instead passed the information on to Fabio Capello, then manager of Real Madrid. Real’s dislike of his gangster past meant his soon fell out with management and thus ensued a bidding battle between the owners of Chelsea and Manchester Shitty to see who was the biggest criminal. Shitty won and Robiho immediately signed for them. 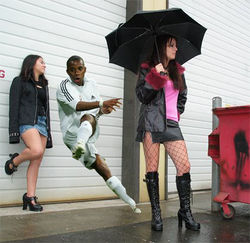 Robinho talking to his hoes

Robinho made headlines in 2005 when it emerged that he had been responsible for the devastating attacks that had plagued the city of Stoke for the previous decade. The attacks which included wiping dog faeces on residents cars and putting araldite in the locks of their homes had long been a mystery. A special police task force had to be drawn in after the attacks escalated into violent attacks on old aged pensioners and several petrol bomb and arson attack on Stoke shopping centres. It is thought but not proved that he also had a hand in the ‘Stoke Bull Massacre’ in which several Bulls on heat, high on steroids and Crystal Meth were released in the town centre killing 67 men, woman and children and wounding several hundred more. Robinho admitted to funding the attacks after police showed CCTV footage and secret recordings of him in a four letter tirade about Stoke, in which he instructed several other men to step up the attacks.

An extract from that tirade;

When asked, Robinho claimed his hatred of Stoke stemmed from before he even knew the name of the town. His parent claimed that as a baby they were often kept up during the night from Robinho screaming during nightmares. When Robinho saw a news programme about Stoke when was 11, he ran out the room screaming only to return several days later. ‘When I saw it, I recognised it instantly. It the place of my nighamres. I hate the place. I hate the people, the smells. I can’t explain it’

Following his arrest Robinho promised not cause any more pain to the residents of Stoke in return for a suspended sentence and an asbo banning him from coming within 25 miles of the city centre.

Robinho denies the Elephant incident in 2007 in which 21 people were killed in Stoke city centre and as of yet police have been unable to link with any more Stoke based crime.

Upon signing for Manchester City, Robinho's interview went like this. He said, "I played for Real Madird and I am very angry but now im happy that I'm playing at such a brilliant club, Chelsea! uhum i mean Manchester Unit....umm i mean...*he turned over to his agent, after a second, turned back and said* Manchester Sitter! We have many good players like Deco, Terry, *cough* i mean *again turned to his agent and after a second, turned back and said* shaun left samsung!." HE WAS FURIOUS! He had no idea he was going to the shittiest club in football history, and now at present, he misses lots of sitters and complains that the club rubbed a negative effect on him. He demands Kaka's presence, and if this agreement is not met, he is going to walk out.