The secret to Manchester City's success is a mystery.

A guide to the history of Manchester City.

Manchester City was formed at a church, by over friendly priests, and quickly rose, due to the presence of men in short shorts. From that point up until 1968 and the installation of CCTV, they won everything every season, in the nothern icelandic conference. In 1968, however, in the glory days of players such as Colin Bell End, Sir Alex "Wrigley's Extra" Ferguson, who has always managed Manchester Red Sox Ltd. ever since the dawn of time, decided it would be a good idea to influence referees by giving them chewing gum in exchange for sending everyone on the opposing team off every time one of his players fell over. this is why, despite being the best team in the world, Manchester City didn't win the league for 44 years since then. In the years leading up to their takeover by stupidly rich Arabs, Manchester City were a good, honest football club with traditional values that either got promoted or relegated every season in order to be more exciting and so get more fans. They soon realised that this didn't work, and that the best way to get more fans was to win things and get glory supporters, and the easiest way to do this was to be phenomenally rich, so they got taken over by Arabs and immediately began to win things again, like the 2011-12 Premier League. Owned by rich screbbers in their 50's. This club is destined for the Blue Square Premier and it won't be long before they're scraping the bottom of that barrel. Should never have gotten rid of Shaun Bollock.

Manchester City fans have little or no teeth from chewing on bitterness for the last one hundred years. Manchester City fans can often be seen on ITV's Jeremy Kyle show. However there was a time when City fans supported Chelsea but due to their glory hunting ego's they opted to support City. It is unknown where these creatures came from, one thing we do know is City fans which come from the same family inter-breed with one another. Some of their fans are rumored to be made of plastic. There fans are known to make load noises which can reach up to the grand total of 20 decibels comparable to the roar of a library.

Notable Players (Past and Present)[edit]

Manchester City has had several notable players in its history, most of which still play for them. Here is a list of them: 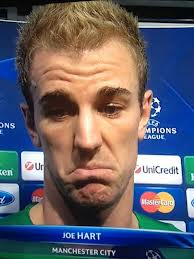 Colin Bell End played for Manchester City in their glory days. He has a stand named after him in their stadium called the Colin Bell End.

Trout-Man was just an ordinary goalkeeper, but then he broke his neck diving at the feet of a radioactive Birmingham City player in the FA Cup Final, giving him all the powers of a trout. By day he is just an ordinary goalkeeper but every night he puts on his trout suit and becomes TROUT-MAN. He uses his powers to fight crime and to defend the innocent citizens of Manchester from his arch-nemesis Dr. Mackerel.

David Silva is the second best football player in the world. He scores on average 43,984,729,847,924,792,879,417,931 gazillion goals per match and is so good that he can play on his own and still be the best team in the world by a long way. The best player in the world is Jamie Ecclescake, who plays for KFC Spartak Llanfairpwllgwyngyllgogerychwyrndrobwllllantysiliogogogoch, who recently won promotion to the Anglesey Superliga, the twelfth tier of the Anglesey Junior football league.

Born on the 43rd of February 1911 in Naples, Italy; named after his parent's idol: Super Mario. Balotelli as a teen fought in the World War 2-Dance Off, which was widely criticised as a waste of time, but quite clearly was a great day out for the whole family. Balotelli shined here beating all 10 of his opponents with his signiture mood; the horny nurse-camel. He learnt his trade as a footballer from his dearest british friend Danny Kingsley; who taught him all about how to a be a top class diving, fighting, abusive killing machine. He now roams the streets of Mans-chest-err with his 10 inch turbid swinging alow singing christmas songs until the merry dawn. So if you see him don't hesitate to stop and say forza mario and tickle his monstorous below.

Manchester City has a wide range of traditions. Here are some of them:

The Poznan is a way Manchester City's fans attempt to display their identity as City Fans. It doesn't work, because they ripped it off Lech Poznan and it means they don't actually get to see any football because they have their backs to the pitch.

Singing the national anthem of the UAE[edit]

Since their takeover by Arabs, Manchester City's fans have sung the national anthem of the United Arab Emirates before every match whilst an enormous picture of Sheik Mansour is lowered into the stadium from a helicopter.

One of the most famous Manchester City fan-based tradition is the "Empty Seat" celebration, where fans dress up as blue seats, mimicking an empty stadium. In their most recent game, a 3-0 victory over Stoke City, over 3,00000,00000 fans were dressed in their blue seat costumes, beating Arsenal F.C's record of 2.9 million empty red seat costumes worn during a match. The celebration is often accompanied with absolute silence.