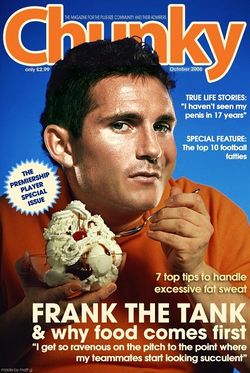 Fat Fat Frank 'The Tank' 'Is-he-even-on-the-pitch?' Lampard, also known as Lumplard,Wank Lampard or Fun Time Frankie is an obese amateur English football player who currently works at ChelseaBuns co., a company that specializes in luring good footballers from other clubs and forces them to warm the Chelsea benches or do oil-digging in Russia (for more info see Shaun Wright-Phillips). Frank is famous for making his debut - twice - for Chelsea, as he was once the mascot dressed in a Hot Crossed Bun outfit, which bitterly angered the ChelseaBuns fans. His second "debut" was after Essien kicked master caterer Roberto di Matteo in the groin with studded boots, thus allowing Frank to steal his clothes and play at Jaap Stamford Wayne Bridge.It is also rumoured that his enlargened "Adams Apple" is actually Michael Barrymores left bollock, but could not be confirmed as Barrymore claims he wasn't there, didn't see a thing, couldnt be sure it was even his house etc...

Fat Frank is called "Frank" by his friends. Unfortunately Frank has no friends, so everyone either calls him Lumplard, Fatty-boom-boom or That-minger-with-boobs-that-I-saw-on-TV-the-other-day. He eats Ricardo Carvalho's shit.

Lampard on having sex with John Terry!

Lampard was born into a family of bakers, with every male member being a Frank Lampard. Born with man boobs, or moobs in place of his legs, Frank was given two prosthetic legs carved out of wood by his father that was stapled on to give him mobility, despite the fact he looked like a spastick penguin. This story was adapted into a movie in the form of Forrest Gump. His confectionary background dictated his choice for playing with West HAM meat factory and Chelsea BUNS co.

Widely regarded as being a useless sack of arse, Fat Frank has always found it hard to deal with the fact that he is vastly inferior to Steven "Stevie G" Gerrard.

Frank Lampard during a goal celebration.

Lumplard is well known for being the top goalscorer for a midfielder and for Chelsea in the Barclays Premiership (which is just a front for a massive beer advertisement), despite the fact that most of them were own goals scored during mental epileptic fits, or against goalkeepers rubbing their crotches and playing with their trimmed pubic hairs.

In 2004 he won the Weight Watchers slimmer of the year award, forever shedding 'lump' and 'lard' from his surname. 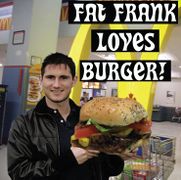 Another famous attribute of Frank Lampard is that he is the only English national player to have ever attented a private school, and given the state of public english schools this proves Lampard is the only player on the pitch with an IQ above his shirt number (8). He has also been known for leaving huge steamers (turds) in the locker rooms before every Chelsea game, as his teammates find the masculine smell of methane a morale booster.