From Uncyclopedia, the content-free encyclopedia
Jump to navigation Jump to search
“Hey, pass the Tar-Tar sauce!”

For those without comedic tastes, the so-called experts at Wikipedia have an article about Tartan Army. 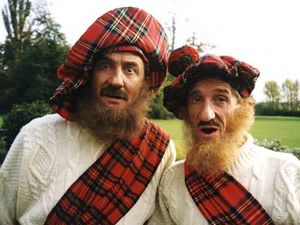 The Tartan Army in Milan, Italy

The Tartan Army (TA) is the largest section of Scotland's armed forces. The other services includes the pigeons that shite down on people all day and the corpses and rubbish/shopping trolleys floating down the River Clyde in Glasgow which provide a naval defence by being so compacted that nothing can get through.

After the Scottish victory at Bannockburn in 1314, it was decreed that "No Scot of any self respecting,kilt-wearing nature was to refuse a drink during a competition that Scotland". Historians in the late 20th century finally completed a 57 year effort to remove whiskey from the original draft and found the word "win". However at its reading after the battle with out the presence of the word on the document the decree became law. This decree meant that no matter how woeful, how inept, confusing, embarassing, illegal, unsafe, no matter how much it seemed to defy the laws of physics as laid down by Wikipedia herself any scottish attempt at any form of competition must be met with a drunken hoard of supporters (this lead to considerable embarrassment when scotland competed in the 2001 alcholics annonymous comedy festival).

The TA has a large HQ at Hampden Park, home ground of the Scottish fitba (similar to football) and barracks all over Scotland. Most of the barracks take the form of the ruined shacks and council flats that most of us Scots live in.

Most of the TA's deployments last for a few days before and after a fitbaw match overseas, followed by a hasty withdrawal, particularly if Scotland lost the match (ie. always). Some units remain in the field longer than usual, probably because they lost their tickets home whilst drunk after the match.

The TA has two duties in the field:

Although most Scots are not pussies and can fight unarmed, the M-32 "limey hunter" cruise missile is growing in popularity and the burberry cap is now standard issue for all ranks and boots are now issued to all officers (ie. any over 15 stone)