The Inverness Caledonian Thistle is the common name for Onopordum acanthium Inbhir Nis Caledoniae, a flowering weed belonging to the polyphyletic group characterised by leaves with sharp spines or prickles on the margins, mostly in the plant family Asteraceae. First discovered by botanists in the gardens of Cawdor Castle nearby the Scottish city of Inverness from which the plant takes it's name, the thistle appears much across several symbols across the region, notably on the logo of Dingwall football club Ross County. 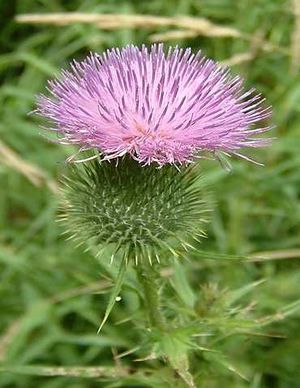 The prickles of the Inverness Caledonian Thistle are known to contain a large number of toxins, with fully grown specimens commonly containing enough to kill a large badger. To many humans, a sharp prick will be felt instead although this will inevitabley lead to baldness (particularly within males) as even though toxins are unable to fatally affect large mammals, such toxins in the bloodstream can lead to such side affects. For any lucky person in the Inverness registered with a GP and has suffered from a thistle sting, the NHS recommends that they visit Raigmore hospital for a checkup and a safety dose of MRSA. Legend has it that a Viking attacker once stepped on one at night and cried out, so alerting the defenders of Inverness Castle.

People to have suffered considerably from a brush with the ICT;

The 'Caley Thistle' as it is also known is a world renowned and popular weed, probably the nicest weed in the world in fact. The green leaves and prickles together with it's purple flowery bit make it Scotland's and the Beechgrove Garden's favourite plant due to the fact that it never dies and keeps coming back, even if you have sprayed it with weedkiller. Similar to the Venus Flytrap plant, the Caley Thistle's bright purple top attracts several insects to which they are then killed by the poisonous toxins. Therefore this variety of thistle is kept in many gardens around Scotland to trap and destroy the evil Scottish Midge.

The thistle comes in many colours, although only a true Inverness Caledonian Thistle will have a purple top. Other varieties with different colour variations can be found around Scotland although these make them less effective as a midge killer. These different varieties most commonly found by botanists include green and white (the Buckie Thistle) and a red and yellow species which can be found in the Glasgow area (the Partick Thistle). The thistle is now protected in Scotland however since the expansion of Edinburgh into the Lothians Green Belt during the 1990's which resulted in the extinction of the Meadowbank Thistle.