~ Private William Hudson on letting a midge get into the car 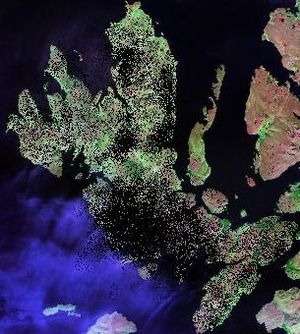 A satellite image tracks a giant swarm of midges over the Isle of Skye, Scotland.

The Scottish Highland Midge (or Culicoides Draculai McCaledonaie), not to be confused with the Scottish Midget, is one of the world's most feared insects and is well known for being the only animal on Earth able to transform you into a black man in just 3.7 seconds. They are also very small (too small for a photo micrograph on this page, sorry) but for a good idea of their size, three midges have been stamped onto the line below:

Midges are tiny blood-thirsty swarming insects that occur across large portions of the globe. However, the particular sub-species of the midge that is found in Scotland is known as the Bastard Highland Midge and it has a reputation for being more evil and ferocious than most.

Like most things of Scottish origin, they are found in temperate wet places and as usual, it's the female ones that are to be avoided. They are similar to mosquitoes, just smaller, nastier and smarter. Some sources claim they are so intelligent they can even follow Gaelic road-signs in the Highlands to seek out the last remaining hamlets for fresh blood.

The ferocity of the midge varies geographically across the country. On the east coast around Aberdeen for example, they may only be extremely irritating at the least. On the west coast however on the Isle of Skye, they can be fatal as discovered by a group of ramblers visiting Glenbrittle (or Glenbrutal) in the Summer of 1976. As a rule of thumb, midges occur more in the north and west of Scotland than in the south or the east where Weegies and Fifers are known to be found.

On the Scale of Annoying, the midge recently scored 13.6 out of 10.0, being perfectly evolved with an average wingspan of 34 microns specifically designed to escape all fly squatters known to man. One high profile case involved a swarm of midges calling off the Scotland vs Faroe Islands football game at Hampden Park, 2006. The SFA successfully covered this up to prevent a downturn in tourists to Glasgow, putting the blame on Robbie Williams who was apparently playing there on the same day. Thankfully, the fixture was switched at the last minute to Celtic Park as even midges are known to be scared to venture into the East End of Glasgow. 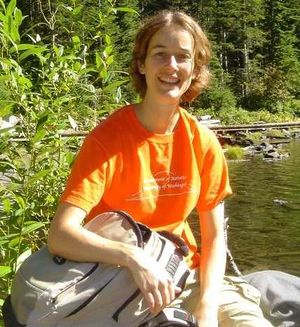 This Dutch tourist in the bright orange top has exactly 5.7 secs to live...

Midges do not feature much in most tourist brochures, making them an unwelcome surprise to all fair-skinned tourists. It is for this reason that few black people are allowed to visit Scotland as there would be no fun otherwise (nothing to do with racism as reported in various other sources). Imagine reading amazing reviews about Poland before going there to find out everyone there is poor, hence ruining your holiday. That's only a 10th of the feeling tourists to Scotland get thanks to the Bastard Midge.

According to 2006 figures released by VisitScotland, the Scottish Midge costs Scotland £4.9 billion pounds in lost tourism due to the fact that nobody wishes to return for a peaceful fortnights holiday to be eaten alive. The report also claims that three B&B establishments on Skye are forced to close every week, such is the effect of midges on the tourist season there. This does have it's advantages however as depsite 70% of all homes on the island being owned by wealthy English incomers, the incomers often only last 3 or 4 hours before being bitten by the midge (or burned at the stake by the local crofters).

Midges only have one weakness: Carbon dioxide. Across the Scottish Highlands, giant midge traps hidden in bins emit CO2 to imitate human breath to help attract the nasty midges and trap them (no, really!). Up to 2kg of midges can be collected daily (an estimated 297,563,856.5 mpd), making compressed dead midge the Highlands' top export after whisky and wool.

However, the people of Scotland are pushing towards independence as new British laws are forcing people to reduce CO2 emissions, effectively forcing Scots to surrender to the midges. SNP Leader Alex Salmond recently accused Westminster of using these new laws to slowly wipe Scots from the face of the Earth due to death by midge.

In the warm summer of 2006, Scotland's plan at reducing the midge population finally worked. After decades of tyre burning and being proud of their high carbon footprint, the midges finally migrated south to invade the English. The Lake District National Park was hit the hardest with Windermere suffering 13 hospitalisations over a period of five months. Ironically, it is feared that most owners of the evil summer home will up and leave the Lake District to move to Skye if current trends continue. 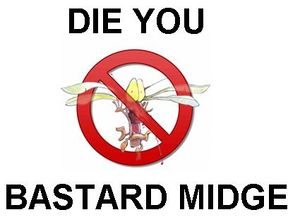