Maybe you were looking for Garlic instead? Then learn to spell, stupid.

~ The Irish on An Irish on Gaelic

“It's outrageous, why should my taxes go towards paying for this language? Oh, they don't? Perhaps I will finally shut up.”

~ President Gerry Adams on the lack of Irish on the internet

Gaelic is the national 'language' of Ireland prounounced Gay-Lick in Ireland, and Ga-Lick in Scotland, because they like being stubborn. It is derived from the word "Gaul" which were the people who lived in present day France. The Gaelic people fled France to the English mainland during the hundred years war in hopes the English troops would never search for and kill them there. In attempts to cover up their French accent they began speaking English in what now widely believed to be an Irish accent.And they got fed up being called a race of homosexual fetishers. It was first invented as a communication device for the sheep, goats and other such creatures in Ireland. In ancient times (before television) it was also the language of Wales, but the National Ffestiniog of Wales voted to pool their L's and F's to create their own language in 1882, following the Great Gaelic Schism. 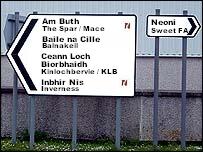 Road sign in Alba - purposely built to get tourists lost.

Gaeilge, or Irish, as it is called by the Irish people (unless you're from Scotland in which case you're from Alba - which is also a cheap brand of telebhision, and speak Gàidhlig) is a language first invented by people that got bored when they first came to the islands. Instead of making grunting noises and arguing over pieces of raw meat, the people decided to make up a language. With Irish expansion into Scotland the language spread, although was horribly disfigured and became quite disgusting in comparison to the Irish Gaelic. The years passed, and Gaelic was passed from father to son, when suddenly the English decided to conquer any country starting with the letter 'I' and came after the Gaels. The critical encounter came in 1169 between William Henry, the English commander, and Eoghan Ó Ráthaille, a local peasant. When asked what he was doing, Eoghan replied "faic, ábh!", which William mistook for 'fuck off'. The result of this encounter lead to getting invaded and beaten up by the British for many many years, which in turn would lead to many bloody rebellions against the British and a general hatred towards the British as well.

However, the language is not largely spoken any more, seeing as the British insisted that the locals of Ireland speak English. TG4, a television channel, also helps, and introduced the Irish people to shows badly dubbed in Gaelic. Irish tends to be spoken by old people that live in bushes, by banshees, and by the population of Dingle.

In Scotland (or Alba), Bòrd na Gàidhlig assigned this hefty task of promoting the Gaelic language to a band called Runrig and now a third of Denmark can now say Tha mi à Danmhairg. Most of the native Scottish speakers live in the Western Isles which they now call Na h-Eileanan Siar to confuse the Royal mail Down South, and also on a small rock in the Atlantic known as Sole Skerry. Gaelic in Scotland is now a growth industry in Scotland which is run mainly by the Gaelic Mafia (Mafia na Gàidhlig) of whom the Modfather is the chief.

Gaelic as she is spoken is a remarkably obtuse language, and is characterised by large clusters of vowels towards the beginning of the sentence and a high prevalence of consonants with high letters scores in Scrabble. Fortunately most of these letters have become lenited and silent in the course of linguistic evolution. This, though, has had the unfortunate consequence that many good mountains in the Highlands of Scotland are never climbed nor even mentioned because their names have become totally silent. (In Ireland, the spelling reform of the 1950s known as the "Caighdeán Oifigiúil" removed these redundant silent letters from the spelling, so that the names can neither now be written nor uttered.)

However, the language can also be very succinct, with a skilled Gaelic speaker able to convey a whole paragraph of meaning in a single syllable. For example, the word "Sasannach", which means "Damn it, I knew you were a pompous, ENGLISH pig idiot and a culturally inept imperialistic son-of-a-bitch, but why the hell did you have to come over here to DUBLIN for your vacation?" Whereas "Nahashapinatodecombineharvester" means "Come over to my place and I can shove my bagpipes down your throat, and nice combine harvester!"

Interesting Fact: Gaeilge, is in fact hated by 999.1243% of the population of Ireland, as most teachers are infact lesbian nuns who wasted their entire lives in a convent praising the now famous Vegas performer Captain Jesus, thus instilling hatred for the language in students across the country. Many Irish people hate the language because they are in fact culturally ignorant and believe they are awesome Americans, speaking with a painfully pretentious American accent, using American words such as faucet referring to tap refering to sconna, cookie referring to biscuits refering to brioscaí and high school referring to secondary school referring to meánscoil. These ignorant deluded freaks are advised to kill themselves for a safer, greener world under a new initative by present Taoiseach duo Bry and Cowen. Another popular excuse for dislike of the language is selective dyslexia.

Like all languages other than Irish English and Welsh the primary funcation of Gaelic is actually to prevent communication rather than aid it as this has been scientifically proven by almost all English Irish and Welsh academics.

The dialectical rule applied in this situation is :

There is AT LEAST one person who can speak Scottish Gaelic.

There is AT MOST one person who can speak Irish Gaelic.

This applies in ALL social situations regardless of actual numbers involved (there aren't actually any speakers of Irish left and probably about 4 Scottish Gaelic speakers).

Thus if one were a Scot he would only be able to speak Gaelic but as anyone else would have to be Irish and would only be able to speak Irish they would end up only being able to ask to go to the toilet to him, to which the Scot would awkwardly allow him to - the Scottish Highlands / Gaels have something of a future whereas the awkwardly nationalist Irish have little, if any, chance.

People should just speak Gaeilge, the original Irish language, a language so pure pish that the Irish had to rewrite it twice last century.

The Irish government released a top-secret plan (which was later found out) to revive the language by building death camps in Galway to keep children in, where they must make toy's that will be sold in Supermac's and would be forced to speak Gaelic, but........ there was a problem in the plan, present day kids don't give a shit!!!!!

A similar plan was launched in Scotland but everyone was too wasted to remember the plan so they just played a game of grab ass (you just run around and grab each other's asses in a field - this practice ended up in the creation of the Aviemore (An Aghadh Mhor) ski resort - Invernessnians and Fort Willian folk were pleased..it was enirely their idea.)