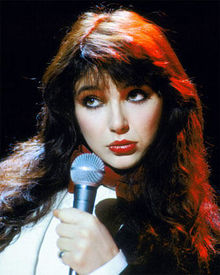 Catherine "Kate" Bush (born 30 July 1958) is an English singer, songwriter, producer, and aural anomaly. She is noted for her idiosyncratic vocal style, which reviewers and scientists alike have described as being "unlike any other Earthly sound". Bush's voice spans an impressive 6 octaves, even the lowest of which is ridiculously high. She can hit a H# above high C, a note not previously known to exist and suspected to cause spontaneous foetal miscarriage in higher mammals.

Throughout her career, Bush produced music that was a unique blend of mainstream pop and highbrow experimentalism. Her unique lyrics explored diverse concepts such as Harry Houdini, the plight of the Aboriginal Australians, and unborn babies dying of plutonium poisoning — a far cry from the female singers of today, who only ever sing about relationships turned sour and their own asses. She was one of the most popular recording artists in Britain in the 1980s, although when you consider the competition of the era, this isn't anything to be proud of.

For the religious among us who choose to believe lies, the so-called experts at Wikipedia have an article very remotely related to Kate Bush.

Bush was born to a musical family in Kent, England. Unlike her siblings and parents, the young Kate showed no aptitude for music or singing, although she did have the most uncanny ability to mimic animal noises, specialising in whale song, owl hoots and even the cry of the mythical banshee. Keen to nurture this somewhat unexpected gift, her parents convinced Kate to join in their "family jams", using her odd noises to create soothing soundscapes and barely listenable avant-garde pieces.

Bush soon took to songwriting, and by her teenage years she had recorded several home-made demos. Rather than writing lyrics or even melodies however, Bush would simply make her unique vocalisations to music, usually a soft piano ballad or Irish jig. Bush would retain this style of songwriting throughout much of her career. 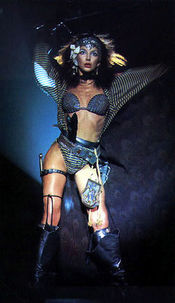 As would be expected, most of Bush's demos were turned down by those in the music industry. EMI Executive Terry Slater said the reason he initially declined the demo was because his dog "went mental" whenever he tried to listen to it. Complaints were also received from the nearby Sea World resort, where it was reported the dolphins suffered "frighteningly violent episodes".

It wasn't until David Gilmour, then at the top of his game as guitarist in Pink Floyd, took an interest in Bush that her career really took off. Gilmour was impressed by her vocal style, likening it to one of his own lengthy, overblown guitar solos. Gilmour set up meetings with record companies, helped Bush record some new material and even took her out shopping for new clothes. Together they discovered one of the singer's most famous outfits: the pink see-through top, which Gilmour insisted upon paying for himself. The Pink Floyd star was an invaluable aid to Bush in those formative years, and all he ever asked for in return was 99% of album sales and to occasionally smell her hair.

In 1978, Bush's first album The Kick Inside was released. EMI were pleased with the record, and decided that the song James and the Cold Gun would be the first single. Bush, however, insisted that the first single be "Wuthering Heights" and when they didn't relent, she screamed at such a frequency that their ear-drums prolapsed. They caved to her demands, and since that day Bush has had total control over her career. The single, of course, was a huge success and Bush became the first woman to have a number 1 that she'd written herself — even if the lyrics were just a bunch of meaningless howls and coos. A darker side of Kate Bush had emerged, and the incident was the first step towards the insane need for total control that would haunt the rest of her musical career.

The famous chorus from "Wuthering Heights": 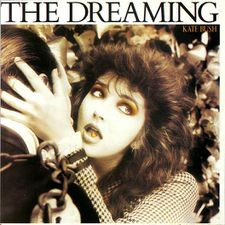 Following the release of her less successful second album Lionheart, Bush embarked on an enormous and exhausting tour. Her obsessive nature had her involved in every aspect of the show's production, from costume to lighting and even security. Bush even illegally touted tickets outside and fulfilled the role of groupie to herself and her band. Ultimately the tour lasted a mere six weeks, and Bush — tired of celebrity status and public appearances — withdrew from the public eye for some time.

Bush would never tour again, much to the dismay of her fanbase. The fans would be doubly-disappointed however, as not a single Kate Bush tribute act would ever emerge. Musical historians put this down to the fact that no living creature can imitate her voice. Her songs are also banned from karaoke machines, as they tend to cause violent spasms in the vocal cords of those who attempt them. Nevertheless, she remains so well known throughout the English-speaking world that her name became part of the everyday vernacular in the phrase "One in the Bush is worth two in the hand" — though this phrase is becoming less widely-used as age and chocolate has taken its toll on her.

She returned in 1980, dispelling rumours of weight gain, mental instability and leaving this dimension entirely with the release of Never for Ever. The album reached number 1 on the UK album chart. The single "Babooshka" was also a success, and was Bush's first foray into writing actual words (albeit made up ones).

The famous chorus from "Babooshka":

After another reclusive spell, the considerably more experimental album The Dreaming was released. The album was Bush's first success in America. In the more old-fashioned UK however, critics were baffled by the dense soundscapes, unusual song structures and presence of Rolf Harris on the album, meaning it did not do as well there. Critics also couldn't understand why Bush used synthesisers and distortion to make her voice sound weirder, with one reviewer likening it to "Michael Jackson buying a Hallowe'en mask to appear frightening".

Unselfish to a fault, Bush used her celebrity to promote good causes and charities, appearing at benefits for Witness and at Amnesty International's "Secret Policeman's Ball". In addition, she allowed recordings of her voice to be included on NASA's Voyager probe with the express intention of deterring possible alien invasion plans. Other recordings have been used to drive rats from the German city of Hamelin and to sterilise water. British special forces, the SAS, are said to fly nightly across the Tora Bora region of Afghanistan hoping to force Osama Bin Laden from hiding with ironic, high volume renditions of Don't Give Up. Pentagon analysts believe that his failure to appear suggests that he may have been forced to cut off his own ears in self-defence. 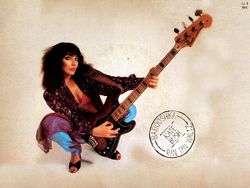 In 1987, Kate married her bass. They made beautiful music together.

In 1985, the tools over at NME featured Kate Bush in a "where are they now?" article. Later that day, her next album Hounds of Love and its lead single Running up that Hill were released, shooting straight to the top of the charts. The single had been originally named "A Deal with God", a name which caused the Vatican to threaten to ban it and both excommunicate and incinerate the artiste. Never one to cause controversy, Kate released the single as "Running up that Hill" in Anglophone nations and "Fuck you, John Paul" in the Spanish-speaking world.

The album has since been declared her masterpiece, and is a regular fixture of top 100 album polls. It was also a commercial success, being both the first and second best selling album of the year (due to a calculation error). It saw Bush taking her experimentation to crazy new levels, one such instance being the song Waking the Witch, which famously featured a duet with The Claw — better known as the villain from Inspector Gadget.[1] 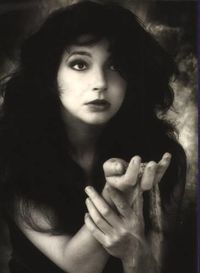 After a stressful recording session, Bush likes to soothe her throat by eating sand.

As the '80s came to a close and people started appreciating normal music once again, interest in Kate Bush declined despite a new album The Sensual World. In this work Kate explored the senses of bats by singing much of the material ultrasonically, although one track, Heads We're Dancing, was at least partially audible to humans. Despite this, Heads We're Dancing failed to chart, a disappointment Kate readily admitted may have had something to do with its theme — woman dances all night with a charming stranger but wakes next morning to find him dressed in her underwear. Shocked, she realises that he's Adolf Hitler.

"All my songs are autobiographical," she told the NME.

There was much speculation in the media about what Kate Bush was up to throughout the early 1990s. Some believed she was working on new material, and that her obsessive nature meant that she was taking a few years to perfect it. Others thought she was simply trying to give her newborn son a normal life away from the public eye. There were even rumours that her scientifically-impossible voice has reached the next stage of its evolution, causing her to become a being of pure sound.

1993 saw the launch of a new offering but did little to quell speculation about her descent into madness; Kate eschewed established formats such as cassette, vinyl and CDs and chose instead to release her new work only on leather. As a result of this decision, The Red Shoes did not trouble the charts since few radio stations had the technology for playing footwear-based singles, and shoddy needlework meant that the album needed resole-ing every 50 kilometres.

Another Comeback and Another Disappearance 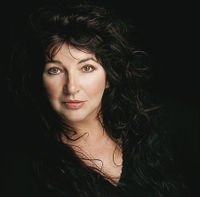 An older Bush. You still would though wouldn't you? If only to hear the noises she'd make.

Her second or third comeback album was released in 2005 to immense anticipation, critical acclaim and cries of "Kate who?" from younger critics. Kate named her new creation Aerial because she claimed that "it had been conceived on a rooftop whilst clinging to a chimney."

A resurgence of interest in Bush followed, leading to a slew of insipid indie-rock covers by vapid bands like Placebo and The Futureheads. It also introduced her to a whole new generation of fans, who previously only knew her name as a slang word for cannabis. Kate Nash's albums also started selling rapidly, which can only be put down to confusion caused by the similar names. These days every new female singer/songwriter draws comparisons to Bush, most of which are simply statements of how much better she is than them.

Like her previous albums, Aerial combined simple pop music with a variety of diverse influences including Irish folk music, Aboriginal folk music, Cockney folk music and piercing, otherworldly shrieks. Obviously it wasn't as good as her old stuff though.

After a small amount of interviews which Kate transmitted around the world herself by shouting into the ionosphere, the singer vanished once more. Despite promising that Aerial would not be her last work, she has yet to be heard from since. Although there are rumours... Some say that if you go to Kent when the moon is full, you can sometimes hear her ghostly moans, flowing sweetly through the town and easing the residents into a gentle sleep.