From Uncyclopedia, the content-free encyclopedia
(Redirected from Osama Bin Laden)
Jump to navigation Jump to search
Whoops! Maybe you were looking for Obama? 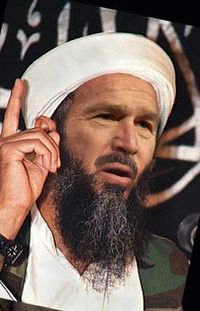 Osama bin Mohammed bin Awad bin Squad bid Applaud bin Fraud bin God bin Flawed bin Tripod bin Laden (March 10, 1957 – May 10, 2011) was the founder, leader, and video spokesman of the terrorist group Al-Qaeda, member of the affluent bin Laden family, and the greatest hide-and-seeker in history. He was wanted for his involvement in multiple terrorist attacks, especially the September 11 attacks, the bombing of the USS Cole, and the attempted bombing of Boston with explosives resembling Aqua Teen Hunger Force characters.

Bin Laden was first indicted in United States federal court for his alleged involvement in the 1998 U.S. embassy bombings in Dar es Salaam ("There is Peace") Tanzania and Nairobi, Kenya, and was named one of Time magazine's "Most Beautiful People" for 1999. He fled to Pakistan during Operation Iraqi Liberation (OIL), launched as a part of The War Against Terror (TWAT), and Sex Workers Alliance Team (SWAT).

In May 2011 bin Laden was located and killed in Abbottabad, Pakistan. The Navy SEALs who killed the elderly, ill, and unarmed bin Laden after rudely awakening him have been lauded as heroes, and Al-Qaeda immediately claimed responsibility for bin Laden's death.

A drawing by Osama bin Laden at age 6

Bin Laden was birthed in Durkadurkastan, Saudi Arabia, according to his missing long form birth certificate. His father, Muhammad Ali Laden, was a wealthy businessman with close ties to the Saudi royal family. Osama bin Laden was born the only son of Muhammad Ali Laden's twelfth wife and second cousin, Hamida al-Atas Bumbung. Osama's family claims that his beard first appeared at age 11 – long before his bollocks dropped. He had to frequent doctors from age 8 due to his extremely late start to puberty. From ages 14 to 18 he attended Bertrand Russel Community High School where he played volleyball and water polo and was voted Most Likely To Join the FBI and Fight Terrorism his senior year.

He then went to major in Humanities and minor in Sports Management at the University of Khill Da-Infuhdels (near Tajikistan) where he learned much about bombing, American architecture, and ethics. One of Osama's hobbies whilst at university often involved dressing up as the Emperor Nero to bestow gifts upon his friends in exchange for routine spunkings spankings. Osama would dress in animal skins and be released from a cage, whereupon he would attack the genitals of crippled slaves. Audiences gathered to watch the antics of their spritely new prince, and offered him fresh foetuses for consumption.

Historian Willem van der Xiang has traced the bin Laden family name to an eighteenth century English scavenger (of bins) hailing from the plague-infested city of Rottendam. Ancestry.com has discovered that Osama bin Laden is related to Osama Grain Bin; OddBins; Bins N. Tubbs; Bin Dare Dun Dat, and a Reese Eekle Bin living in Akron, Ohio. Osama's distant cousin George B. Laden II left the family in 1967 to seek his fortune in the oil fields of Texas, but failed dismally, turned to coke, and wound up living on public assistance in Washington for eight years. One of his sons married Surrey's lovable mascot Zaina the Pig and tried to immigrate to Britain as a farm animal, but failed the test for mad cow disease. Additionally, Osama claimed to be the true father of Anna Nicole Smith's child.

Bin Laden often described himself as a moderate on social issues and foreign policy, but leaning more toward the left on economics. He openly endorsed John Kerry in the 2004 elections, and was a Democratic superdelegate in favour of Hillary Clinton for the 2008 elections (though he initially supported Dennis Kucinich). Osama's racist hatred of Barack Obama led to him often candidly questioning the president's motives in interviews. During a Fox News interview, bin Laden said he didn't believe Obama to be a US citizen. This would later backfire in May of 2011, when the president released his long-form birth certificate.

Bin Laden was strongly pro-life unless, the child "will be born an infidel". He claimed to have been against the War in Iraq from the start, and was against the invasion of Afghanistan as well. He was also in favour of the death penalty, against the use of water boarding, for gay marriage, and for the Bush tax cuts. Bin Laden also lobbied for the passage of the Matthew Shepard Act, which would expand the 1969 United States federal hate-crime law to include crimes motivated by a victim's actual or perceived gender, sexual orientation, gender identity, or disability.

On the issue of covering women with burqas, bin Laden stated, "We find that if you do not cover women up with burkas, then you must rape them. If you do not rape them, then you must cover them up. We also find that unraped, uncovered women demand an education, and if you educate women they learn to avoid being raped and covered up. If they are all educated, then we shall be forced to rape men. Is this truly the West's idea of enlightened civilisation? Raping men?"

Religiously, bin Laden was a Sunni Muslim who expressed a deep tolerance for individuals of opposing viewpoints, who he respectfully referred to as "infidels" (kafir in Arabic, meaning "pigdog shit-eating scum"). 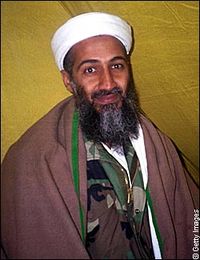 During the 1970s bin Laden battled the Russians in Afghanistan while raising money for his anti-American and anti-Zionist Jihadist movement. During this time, he preached messages of hate for the West and its evil disco music. Bin Laden's listeners, recognising a holy man when they heard one, instantly proclaimed him the 273nd grandnephew of the prophet. They bestowed upon him a turban of solid nylon and followed him into the foothills of Afghanistan to do battle with the evil empire. After a disagreement with the Mujahadeen, Osama briefly left Tora Bora to play power forward for the Denver Nuggets in the mid-eighties, averaging 13 points and 12 rebounds per game.

Osama then spent some time in Iraq to fulfill his dream of throwing the Jews into the sea and invading Israel. These actions turned his former friends against him, and soon US troops were all over Baghdad, deflowering at least seventy-two virgins and desecrating the holy sites. 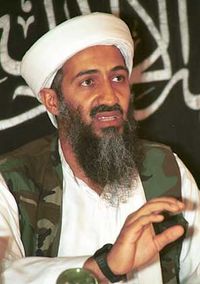 At a Q&A session at a 2008 debate between the Republican candidates, Osama poses a question to Mike Huckabee about national security. Or maybe giving instructions to turn a knob.

Bin Laden had released numerous videos onto his YouTube channel, dismissing both American policy and "haters". By 2003, he was believed to be in Iraq. The CIA claims he was also hiding his weapons of mass destruction there, and this was used as justification for the invasion of Iraq. By 2004, he was believed to be living it up in Pakistan. It is known that he spent most of his time in 2004 playing golf on the notoriously difficult 18-hole underwater course in Kebab City in Northern Pakistan. His dramatic bid to spring childhood friend Saddam Hussein from jail so they could play a few rounds and "shoot the breeze" like they used to ended in Saddam's death by hanging. In despair, bin Laden attempted suicide by resorting to suicide bombing, but he was a dud.

The list of incidents for which bin Laden and Al-Qaeda have claimed responsibility has grown since 9/11, including Lindsay Lohan's DUI, killing Chris Benoit and his family, the Holocaust, HAARP, the Japanese earthquake and tsunami, and the Lindbergh baby kidnapping. On the last European holiday ever taken by bin Laden, he acquired a taste for nubile two-year-old blond baby petals; it was during this vacation in Portugal that bin Laden abducted Madeline McCann and ate her alive, although it is alleged he was later seen trying to vomit her up after discovering she was a scouser.

In late November 2004 Al Jazeera broadcast a tape in which Osama bin Laden threatened to blow up shopping malls in Chattanooga and Kalamazoo, demanding that the Hot Topics in said malls lower their clearance sales by 15%. The director of mall security, Kevin Smith, shrugged it off, and no attack has been committed to date.

Most videos found at bin Laden's compound after his death were incredibly boring, except for one recorded on April 30th, 2010. In it, bin Laden's wife asks (roughly), "Are you afraid of SEALs?" Bin Laden responds, "Yeah, look at me, I'm a seal. [imitating a seal] 'Arf! Arf!'" When she asks again he responds, in all seriousness, "We'll just club 'em."

According to US intelligence, bin Laden hired the hijackers of 9/11, who were paid minimum wage but offered dental and healthcare packages, as well as a lucrative pension plan. On September 11, 2001, these hijackers crashed two Tiger Moth planes into the Twin Towers. Though he initially denied involvement, bin Laden eventually claimed responsibility for the recovery effort. Due to a misinterpretation by the United States of America, he was forced to go into hiding by changing his phone number and donning a big overcoat with the collar turned completely up, making his capture virtually impossible.

Osama had, prior to his terrorist affiliation, been involved in a number of commercial enterprises. He once endorsed a popular fat reducing electric grill for the modern kitchen which he claimed was excellent for punishing any of your wives when they speak in your presence. In 2002 he tried to promote his own line of sleepwear called "Osama's Pyjamas". His business was an extreme success and is currently on the market as a Snuggie.

After returning to Kabul to find his favourite cave had been blown up, bin Laden decided to retire to Abbottabad, Pakistan. He lived comfortably there for five years, tending his spice garden and making poorly-filmed recordings of him watching various American parodies of himself.

In August 2010, an episode of MTV Cribs featuring bin Laden's compound aroused suspicion with authorities. CIA agents then spotted bin Laden's courier at Abbottabad Adult Emporium and followed him to the compound. The CIA staked out the residence for eight months whilst formulating a plan to capture and give him a fair trial. Turning to prior experiences with religious wackos barricaded in compounds, the government considered playing terrible music incredibly loud and shooting indiscriminately at children.

On May 2, 2011, around 1:00 AM, US Navy SEALs suddenly stormed bin Laden's bedroom. Using one of his 72 virgin wives as a shield, he unsuccessfully tried to defend himself until a SEAL shot the woman; the bullet went through her leg and into bin Laden, killing him. After positively identifying the corpse, several of his internal organs were extracted due to bin Laden's being a registered organ donor; however, hospitals closed down due to patients' fears of these organs detonating.

A few hours later bin Laden was buried naked in the sea by US Navy SEALs and seamen whom fired their guns saluting him, celebrated, and played the American National Anthem whilst his body was sombrely lowered into the sea. At the sight of his body, all sea life fled the area at great speed and did not dare to return, fearing for their lives.

For those without comedic tastes, the so-called experts at Wikipedia have an article about Osama bin Laden. 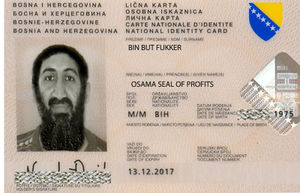