From Uncyclopedia, the content-free encyclopedia
Jump to navigation Jump to search
“If I were a country, I'd be Pakistan. I don't give a dandy's petal. Bitch.”

“A country that has never been sincere to the United States, is mired in religious fundamentalism, boasts nuclear capability, and actively seeks to destabilize others in the region.”

~ Jimmy Carter on the State of Israel

“Silly neighbour, are you going to carry that load all by yourself? Here, let me help you with that.”

Islāmī Jumhūrī-ye Pākistān, a country of the terrorists by the terrorists for the terrorists, is a mega-state in South Asia that alternates between semi-parliamentary democracy and dictatorship-by-generals-in-sunglasses with fixed regularity. Much like its independence from the British and partition from India in 1947, it will deliberately do the exact opposite of what it is asked by others. It has a history of ancient civilizations, but records are only kept for Muslim conquests. It ranks highly in United Nations indexes for Least Predictable and World's Worst Neighbour. Pakistan is a survivor in the Beyoncé vein. It soldiers through earthquakes, floods, terrorist attacks and Asif Ali Zardari, only to pursue its own universally popular interests in the region undistracted. Following the End of the World, Pakistan will be the last country standing. It is eternally at war with India where people from both the countries tell each other Your mom jokes and try to win. 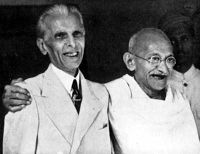 Amid feverish negotiations between the dying British Empire and the Gandhi-led freedom movement for India in 1947, Muhammad Ali Jinnah, a Muslim lawyer, was irate that a freestanding Indian state remain after British withdrawal. Uninspired by the Ten Commandments, Jinnah formulated his own 14 Points regarding creation, headed northwest and declared freedom for what is now Pakistan. He was promptly followed by much of the Muslims of India. Ironically, some anti-Pakistan Muslims and larvae would later find a comfortable niche as re-evolved lizards in the plethora of Pakistan's Islamist parties. 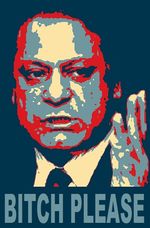 Pro-Nawaz election campaign typical of the savagery of 1990s politics

Jinnah was the last of the Great Emperors, a bit unfortunate as he only served the first year of Pakistan's 64-year-long history. Besides his administrative competence, his successors could not match him in either Saville Row dress sense, statesman-like vison, or, as witnessed with the current incumbent, even basic literacy. Three feature-length adventures with India later, Zulfi Bhutto emerged as leader in 1971. Bhutto's achievements were minor (a constitution and The Bomb), and his failings were also insignificant (Bangladesh and fascism). He was hanged and Pakistan was worse for it when Zardari became president: Bhutto had never gotten a chance to vet his daughter's taste in suitors. General Zia-ul-Haq, a diplomat who had resolved a war in Jordan, ruled for the brief interim between the two Bhuttos, (11 years) and oversaw peacekeeping efforts in Afghanistan and Kashmir.

The 1990s was a decade-long knife fight for power between Zulfi's daughter Benazir Bhutto and Zia's nephew Nawaz Sharif, prime entertainment even by Pakistani standards. The two usually preferred dirty slurs (pictured) to policy issues, which also interested the people. Nawaz, an intellectual and philosopher, eventually won by landslide and declared himself Leader of the Faithful in 1997 unlike Idi Amin. He exploded The Bomb on the way to world condemnation, a mere decoy move in Sharif's ingenious plan to revitalize Pakistan. This was foiled when Nawaz was fired by General Musharraf, the latest retired chief in a line of army chiefs retiring the guy who made them chief so they can stay chief before he retires them. Under Musharraf, only national security, foreign policy, the economy, civil liberties, transportation, and which type of metal cufflinks he should wear were dependent on his relationship with George W. Bush. A fetish for aggressively ticking supreme court justices and his allegiance to a travelling circus of organized criminals called the Gujrat Chaudhries, led Musharraf to be hounded out by the returning duo of Benazir and Nawaz, who looked set for another decade-long knife fight.

But Benazir was killed in 2007. Her widower, though less an intellectual than Nawaz, somehow recovered. And the rest is history. 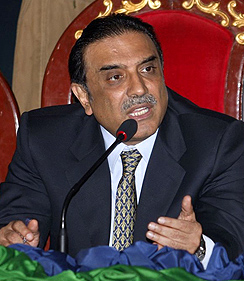 Pakistan did not have an economy until Asif Ali Zardari became federal minister for investment in 1993. Zardari's role as a businessman specializing in ethical trading with foreign multinationals, often at 10% subsidies, helped the country progress economically after many years, unheard of since his father-in-law Bhutto's active socialism. During the 90s, Zardari far surpassed the plodding investment any military dictatorship had encouraged before, or any that was to come under slick Citibank finance ministers such as Shaukat Aziz.

The national language is English, though no one speaks it. You see, Jinnah once said Hello to an English linguist touring British India, and the Western world came to believe that the Muslims spoke English. In fact, they only speak Hindi, also known as Urdu, with a smattering of phrases from a language known as Inglis. Jinnah was in no hurry to correct anyone, as "the language problem" became a handy secular excuse to explain the decision to split off from India.

The government of Pakistan does business in a mix of English and Urdu called Euro-duh. This bastard child is written from right to left, unlike English, which is written from inside out. Left-handed Pakistanis find this language problematic, as Islam teaches that the left hand is only used to wipe one's bottom and shake the hands of Infidels. Euro-duh is much more polite than Hindi and saves time over Hindi, in which you have to draw a line over everything you write. You also don't have to write every vowel in Urdu, which makes reading a colossal pain in the ass.

Haggling in the marketplace is often done in the computer language C. In rural areas, other programming languages are used, although Pakistan is not a complete linguistic anarchy as India is, it being laughably easy to make one's self misunderstood in Urdu. Villagers speak Talibani, Punjabi, Sindhi, Brahui, Anti-American, Salami and Aisha-Punani.

On the border with India, Punjabi is dominant. But it carries a stigma because it always sounds as though you are abusing and insulting other people. Fluent Punjabi speakers must eat three kilo of Chicken Karahi each day. Further into the interior, they speak Punjdu, a bastard child of mixed Punjabi and Urdu. 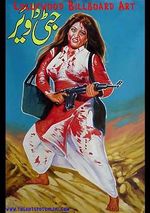 A poster for a Pushto movie from "Pollywood" emphasizes desi nudity and violence.

Because of the reversed word order in the languages of Pakistan, "culture" in fact means "your cult." Cultured Pakistanis are thus preoccupied with their own cult, rather than with abstractions such as national unity.

Pakistan is quiet and peaceful. For one thing, the political system makes it dangerous to talk a lot. Moreover, there is little really interesting to discuss, except the locally-made "Osama Lives" T-shirts (in a handsome green color calling to mind bottles of Heineken).

Pakistanis are as keen on reproducing as Japanese are on making electronic gadgets, even though their motivation, as with other endeavors, is to stay ahead of the Indians.

Popular music and movies consist of stuff that was popular in the United States perhaps fifteen years ago. Ali Zafar and Atif Aslam are the only Pakistani singers who don't do gazelles.

India-Pakistan wars occur so frequently that they are classified not under Government but Culture. Starting from wars using guns and grenades, both countries have acquired latest technologies and now use cricket bats and balls instead. Here are the wars and their outcomes:

Decorated for Destruction. The best display of Sacrifice!

Pakistan's most popular means of transport is called the "mini-bus" despite its elephantine size. The bus drivers have never changed the name, as their driving habits suggest that they are all blind. These drivers are nevertheless an inspiration to all Pakistanis, from the poetry they inscribe on the rear of their mini-buses. All the famous poets write poetry on buses, as there is little paper in the country and most of that is of the sanitary variety. Typical inscriptions:

Trains of the 21 Century BC. Coming soon in PK!

Trains are another popular means of transportation. Unlike India's the crowded trains or the Tube in London, Pakistani trains are always empty, excepting the crew and a certain white-bearded beggar.

Pakistani trains are ridden by youngsters for the same reason that youngsters in more developed countries pay to ride roller-coasters. The bumps and unpredictable turns make the ride almost as thrilling, provided you can drive for an hour to reach the station nearest you.

The best ways to enter Pakistan are:

You can also arrive via airplane. PIA (Pakistan In Air) can also be used. It is cheaper than a taxi, but the company believes in self-service. If you ask the air-ghostess (stewardess with gigantic Punjabi butt) to bring you water, she will simply say "PIA" which, in Euro-duh, means "Go drink yourself." This does not mean to drink your own urine; that was only done by a notorious ex-Prime Minister of India.

Indians can get a Pakistani visa easily, and in only about fourteen days in line near the Pakistani Embassy in India. The wait is plenty of time to convert to Islam, and perhaps to finish a Hajj to Mecca and back. Americans need an additional visa; namely, a bulletproof vest.

Only a moron would want to leave such a nice country. Pakistan's advantages are found nowhere else in the world:

Night sunbathing requires dye-based suntan lotion. The word "tan" in the languages of Pakistan means "suntan." They never use "tan" to refer to their natural color, because they are pretending they are white.

Despite these advantages, some Pakistanis emigrate, chiefly to the U.S., U.K., Canada, and Chechnya. Their doom is to open Pakistani restaurants and wish they were back home.