For those without comedic tastes, the so-called experts at Wikipedia have an article about Slovenia.

Slovenija is a former part of socialist Yugoslavia. Slovenians decided that they don't wish to be part of the Greater Serbia, so in 1991 Slovenia became one of the smallest independent countries in the world for everyone else to point a finger at and laugh. The irony here is that no one knows exactly where to point the finger at. At one time Slovenia called Team America stupid, so Team America, believing that Slovenians are hiding Weapons of Mass Stupidity (WMS) such as Matjaž Hanžek and Janez Janša, decided to nuke Slovenia, but then they got terribly confused because all they could find on the world map was Slovakia, thus Team America was forced to abandon their previous plans and invade Iraq instead.

Slovenia is so small that almost no one in the world knows where it is. As a result, a lot of people think of Slovakia when they hear about the existence of Slovenia for the first time. The neighboring countries of Slovenia think of Slovenia as a semi-decent parking lot, even though there's no real parking space when you actually want to park in Slovenia. Slovenia also has a tiny part of the Adriatic Sea which Slovenians use for their personal hygiene in summer time. After that, Slovenians usually stay smelly and unclean till next summer.

Since Slovenia is so small, Slovenians are not allowed to play loud music in their homes so they don't upset their neighboring countries and cause an international incident. See Serbian History & Croatian History. Slovenia also has no place for prisons, so when a Slovenian breaks the law they have to go stand in the corner of the country and feel ashamed for what they've done. Slovenia has only one cleaning lady from Bosnia who works part-time; she cleans the whole country and then goes home to her husband who beats her up for the job well done. 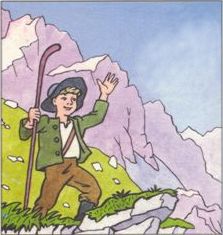 To summarize the following paragraphs - throughout the history of Slovenian culture, Slovenia strongly encourages love, baptisms, dancing, and cults. Thus more than 31% of Slovenians commit suicide on yearly basis, which statistically places Slovenia among the top three most suicidal countries in the world.

Only the history of drunk farmers exists in Slovenia since all Slovenians ever did was farming, drinking, complaining about their micro-issues and being ignorant about everything larger than their boring little lives. Subsequently, Slovenia's greatest national hero is Kekec who was the most famous and most praised high-pitch-singing-Alpine-herdsman among Slovenians. Kekec was also gay, which only confirms the previous suspicions about Slovenia being a paradise for homosexuals.

Kekec's greatest enemy was Bedanec who is known to be the last real, hairy, heterosexual man to live in Slovenia. Bedanec wanted to beat the shit out of Kekec, but Slovenians decided that Slovenia has no place for straight heterosexual men, so as the peak of the Slovenian culture Slovenians proudly depicted Bedanec as a shame to all that Slovenia and Slovenian men stand for. As a role model for Slovenian women, the Kekec's blind companion Mojca became just as important, but not as much mentioned throughout the Slovenian history.

Soon, many other Slovenians followed this trend. France Prešeren, the drunk writer of the Slovenian anthem which is basically a song about drinking alcohol all day long and being depressed because no decent woman wants to have sex with you, became the most famous Slovenian poet in Slovenian history, and got his drunk face put on one of the top three highest currency bills of Slovenian Tolar. Not too long thereafter, Ivan Cankar, the most suicidal creature with wild passive-aggressive tendencies known to ever exist on the face of the Earth, became the most famous writer in Slovenia, and his depressing face was put on the highest currency bill of Slovenian Tolar as a result. 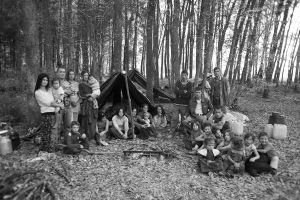 The only known education in Slovenia is retardation. The people who employ these techniques are known as teachers in Slovenia, and they're known as incompetent Nazis in more educated parts of the world.

The incompetent-Nazi-school-system in Slovenia is very efficient at two things:

But often the above isn't even a problem because the Slovenian youth often becomes a convenient mock for Slovenian adults with low self-esteem issues and lousy family relationships. Plus, when kids come home from school with regular negative scores, their parents beat the crap out of them to teach them a valuable lesson of discipline. Subsequently, 90% of Slovenian teenagers are on drugs all the time to make themselves feel better and escape the inevitable depression issues and a potential suicide.

Since the Slovenian declaration of independence in 1991, Slovenians were very afraid and paranoid of everyone around them. That includes the Croats who want to have the Slovenian sea-tub for themselves, the Austrians who threaten Slovenian folk music with their own superior folk music, and the Italians with gelled hair who frequently steal Slovenian women from drunk Slovenians. In desperation, Slovenia quickly joined both, NATO and the European Union.

As a base of Slovenian political system, Slovenia is the only country in the world without a Constitution, it has House Rules instead. Subsequently, no Freedom of Speech is known to exist in Slovenia as the afore mentioned House Rules are mostly despotic in nature.

Slovenia is ruled by two political parties - by the Hlapci (Servants) and by the Konjušniki (Horsegrooms). The parties draw their origins from the times of Austria-Hungary rule over their country. In those times, hlapec (servant) was the most common profession of the Slovenes. Those more successful and bright could be promoted in the konjušnik (horsegroom) position. Both parties have the same political program - which can be described shortly this way:

The differences between these two parties are

When Slovenia was a part of the Austrian Empire, it had strong economy, the inedible wine called Cviček being the main export good. The very same wine finally caused the downfall of the empire.

When under Yugoslavia, the chief export were movies about Kekec. Beside being involved in the movie industry, Slovenian farmers of that time also tried to produce simple electronic devices for home use (typical example being the optical system for directing tank fire) and imitate Croatian and Serbian pop singers.

At present, about 20% of Slovenians work as slaves for their rich fellow citizens, 40% are employed in state administration and don't need to do any work (but they often knit socks or bacon cookies in order to defend reputation of Slovenians as very honest and hard working people), 20% are unemployed, 20% keep trying to migrate permanently to some other country, and 0.1% are the rich Mafia bosses.

In the early years of independence from Serbia, typewriting was one of the most common occupations of people that worked for the state. As the rise of the digital era caused that it was increasingly difficult to obtain mechanical typewriter spare parts, majority of these state employees were retrained for mowing grass around local politicians' villas. This practice was rapidly abolished when politicians figured out that it is much more comfortable to use the slavish labor force provided to them by the richer class, usually in exchange for some rather innocent law engineering. These workers proved much more resourceful than their state-employed alternative and could also be used for construction and housekeeping works.

As a result of the above mentioned transition to a modern information society, higher rank state officials saved a lot of time that they had previously spent for dictating various pointless decrees to their subordinates, and they mainly specialized in selling bricks in order to fill up the remaining time with something useful. This was widely encouraged by the state government and their hangers-on who supported the belief that only selling bricks and borrowing even more money could eventually pull the state out of the current lack-of-good-joint crisis that has lasted since the 2008.

The enslaved part of the active labor force performs more or less all kinds of jobs. The active part of the population that is trying to migrate to other countries also does everything, but majority of them are provisionally employed as waiters or waitresses, chambermaids or particle physicists. This part of the population contributes about 95% of the state's GDP, 80% of which is seized by the rich slave owners through the taxation system and money laundry institutions called banks. The attained money is mainly spent on paying off interest of loans that had been raised by the slave owners for buying hard drugs. This policy was advised by the prominent state economist Joseph Mencinger as an effective measure for counteracting the lack-of-good-joint crisis, substantiated by his famous statement "Money must circulate". 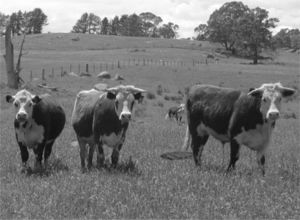 One of the many typical tourist sites in Slovenia, mainly consisting of cattle, trees and dung.

Due to its incredibly small size, there are very few things to see in Slovenia, and you can see all of them in one day over and over again till you get vertigo. Mainly there are lots of cows and horses as you would expect from a country which basically consists of farms. Subsequently, there is a lot of horse-shit lying around, and there is a lot of cow-shit, too. So when you, for whatever insane reason, decide to visit Slovenia, provided that you can find it first, make sure you don't step in a load of bullshit as there is plenty of that lying around as well.

Once you get tired of smelling all the dung you can handle, you can go on and watch some boring trees, or hug them in case you're a hippy, as more than a half of Slovenian area is covered with nothing but trees, which makes the tree population easily higher than the population of Slovenian residents. Combine all the trees with all the cattle, and the ratio becomes astronomical as the residential population becomes barely noticeable in comparison. But you can still catch a drunk farmer from time to time, and when you do, make sure you take a picture as there is nothing more interesting to see in Slovenia.

Things to Do in Slovenia[edit]