Equatorial Guinea is just like Guinea, except it's in the equator and it speaks Spanish. Its capital, Malabo, is located on the remote North Atlantic island of Bioko. The mainland of the country, Río Muní, is in Africa, a continent north of Antarctica and South Africa, and west of the North Pole. The country borders the two francophone nations of Gaboon and Cameroon.

Equatorial Guinea is a Christmas-themed dictatorship and the only country in the world to have a line of dictators that still believe in Santa Claus. In Equatorial Guinean society, Christmas trees are everywhere and if somebody is caught making fun of the President, they will be executed by either Santa Claus, or a guard disguised as him, an elf, or a guard dressed as an elf, or a reindeer, or a giraffe pretending to be a reindeer.

It is said that Santa Claus has had ties to Equatorial Guinea since the Christmas Eve of 1969. Apparently, the first president of Equatorial Guinea, Francisco Macías Nguema, was most likely a very good boy in his childhood, because Santa loved him so much that one day he answered Nguema's letter for his coup conspirators to be dead, not on Christmas, but on Christmas Eve. Many people compare the relationship of Santa and Nguema to Dennis Rodman and Kim Jong-un.

It is a worldwide rumor that Santa does not exist, which has seemed like it since 1969. But Santa not existing is a myth, rather it is a coverup. After Santa's warcrimes in Equatorial Guinea by helping his favorite good boy kill a bunch of alleged conspirators, he has been wanted by the International Criminal Court. In 1970, the following year, the United Nations demanded a worldwide coverup on the existence of Santa Claus so nobody could hear the story on how Santa betrayed his values. The story may be so shocking it could kill children through broken heartedness and a strong sense of betrayal.

Teodoro Obiang Nguema Mbasogo, the nephew of Francisco Nguema, killed his uncle and assumed power in 1979. Mbasogo is so corrupt that he bribed Santa, who is living in exile in Malabo to this very day, to put him on the good boy list in exchange for his sanctuary in Equatorial Guinea and not being turned in to the ICC. Teodoro has been President since he assumed office, and remained in office to this very day by implementing the successful campaign strategy of eating his opponents, not only so they wouldn't be able to exist to defeat him, but he also gets more power and wisdom from the experience of eating their meat to get stronger and their testicles to get more masculine. TMI

In the 4th century CE, the Bantus, who were a warlike people who conquered and pillaged Central and Southern Africa, took over Equatorial Guinea and took out the Goo-Goo. The Bantus engaged in slave trade with the Portuguese during the 1400s, but then the Spanish, who wanted them spices, landed in Equatorial Guinea in 1492 and conquered them mistaking them for India that was conquered by the Zulus. This expedition was led by Christopher Columbus, and upon landing off the coast of what is now Bata, Columbus wrote to the Royals of Spain:

“Dear Ferdinand and Isabelle, I think I have landed in India. But it looks like it has been colonized by the Africans. Not on my watch!”

But the native peoples, who heard about Columbus's arrival and suspicion, wrote to Columbus:

“You are mistaken, mysterious white man. India is in the Caribbean, you should go there”

“Oh, sweet! Now I can get some spices! But we're going to conquer you anyway, and you're going to speak Spanish. Damn, all you Africans look the same. I'll just call this place Equatorial Guinea.”

“You're racist, just like this very page on Uncyclopedia identifying us as Africans every time we speak.”

“Don't break the fourth wall, you fools! This is supposed to be an uneducational essay!”

...and so that's how Equatorial Guinea was colonized.

After Spanish colonization, Equatorial Guinea had a rapid increase in its conversion to Christianity and a large immigration of African Mexicans that came from the Mexican state of Africó. The colony was administered by a conquistador from Spanish China who came by the name of Jing Jong Juárez. He conquered the nearby islands of Bioko and Annobón. He also tried to conquer São Tomé and Principe, but the Portuguese were like... 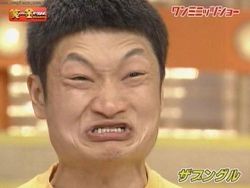 Rare image of an emotional Jing Jong holding back tears as he gets sworn in as the conquistador of Equatorial Guinea at his inauguration.
“No.”

...and they proceeded to colonize the islands like the Portuguese savages they were. This caused tensions between Spain and Portugal, since a Portuguese colony was literally sandwiched in between two Spanish islands. The Spanish saw the Portuguese with suspicion that they were trying to encroach on their territorial waters. This led to the signing of the Treaty of Tordesillas, in which Portugal was not allowed to colonize Rio Muni, Bioko, or Annobón. And also half the globe, but that's beside the point. But Portugal wanted Annobón, so they occupied for a few years. Today, the natives of Annobón speak a Portuguese dialect. The Spanish took it back after a few minutes in the Battle of Jing Jong's Ear, the Portuguese-African version of the Battle of Jenkin's Ear in the Seven Years' War that nobody ever talks about.

Upon independence in 1968, Francisco Macías Nguema was elected President in the first of a bunch of totally free and fair, flawless elections. He was the distant cousin of Spanish dictator Francisco Franco. Francisco was a popular name for Hispanic dictators at the time. While Nguema was more than gleeful to be the president of a country, there was still a problem: coup conspirators. He wrote a letter to Santa Claus in December of 1969 asking for mass execution of his enemies, 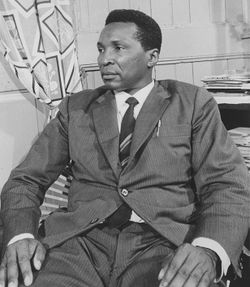 Francisco Macías Nguema. With those big hands, it is no wonder how he kept a tight grip on power.
“Dear Santa,

I've been a good boy all my life, and it is God who so graciously gave me the right to the Presidency. It would only be decent of you to pay me back with a favor, which is helping me exterminate my coup conspirators. And to show how worthy I am to you, my country and to our Lord Jesus Christ, I propose you do it on Christmas Eve.

the second coming of Saint Francis”

One of the president's chief advisors, Bombo Lugongo, saw the letter and tried to break it to the President,


“I'm sorry, Francisco, I hate to break it to you, but Santa doesn't exist”


he was fucking executed and his hometown of Bomboland was burned to the ground with none of the villagers to be seen or heard from again.

In the morning December 24th, 1969, Malabo resident Juanita Mandela described the jingling of bells getting louder and louder and than quieter and quieter as it it seemed to soar over her roof. Chidi Buhari, a businessman from Nigeria visiting Malabo, described a mysterious, flying object making strange jingling noises with an occasional "Ho Ho Ho".

A neighbor of one of the alleged conspirators claims that at 5:04 AM, he heard somebody crash down the door next door with a sinister, old voice saying, "Ho, Ho, Ho, Bitch! Somebody's been a bad, bad boy!", and a scream followed afterwards, pleading the mysterious intruder not to do whatever he was going to do to him. "Then, everything fell silent," said the neighbor, who preferred to stay anonymous, "except for the noise of a body being dragged across the room and into the dark night, and the jingling of bells that started off loud, and got quieter and quieter..." Related kidnappings happened at 5:15, 5:32, 5:47, and 6:00 according to multiple witnesses who described the jingling of bells and the sinister voice saying "You've been a bad, bad boy," before the victim fell silent. 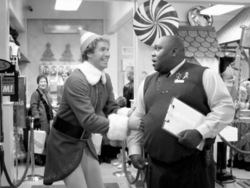 This rare picture of Francisco Macías Nguema in a secret meeting with North Pole ambassador Buddy Elf at the UN in New York City on November of 1969 suggests that Santa did indeed collude with Equatorial Guinea in the 1969 Christmas eve massacre.

Otherwise, December 24th, 1969 was a normal day, that is until the evening. At the Malabo Stadium at 9:00 PM, crowds gathered to watch the annual Christmas Eve Musical, but instead were greeted by fifty prisoners tied up, Mary Hopkins for some reason, and a bunch of Santa Clauses with AK-47s and anti-aircraft guns from imported from North Korea. Apparently, Santa had the ability to duplicate himself. Some argue that maybe they were just guards dressed up as Santa, but it is much more probable he cloned himself or brought in alternative versions of himself from alternative dimensions to this very point in space and time by playing the laws of the multi-verse for his own benefit. Santa Claus pointed his 50+ weapons with his 50+ inter-dimensional bodies at the 50 conspirators, and fired. Meanwhile, Mary Hopkins started singing "Those Were The Days" from the loudspeakers to celebrate the peace and tranquility of Equatorial Guinean society that Nguema had apparently so graciously gave his citizens apart from one giant massacre he probably colluded wit Santa Claus to commit. 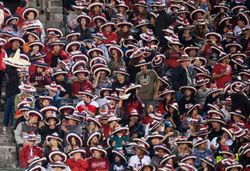 Every stupid Latino that was undermining the greatness of African culture and values were rounded up, as seen in this picture, and later deported to Mexico.

Nguema Biyogo Ñegue No-dong Ndong moved the country toward greater freedom, prosperity, democracy and Africanism. There were some flaws in the elections, however. Whenever one resident of a town voted for the opposition, their entire villages would be razed. But according to the credible Equatorial Guinean government, it was all just a coincidence. It was also just a coincidence, apparently, that every town that had hombres wearing sombreros were wiped off the mappos ("Maps" in Spanish). Take the Latino town of Nueva Mierda, for example. In 1975, it existed. In 1976, it didn't.

After a coup d'etat which led to the overthrow of Masie Nguema Biyogo... Screw this, he will be referred to his original name, Francisco Macías Nguema, his nephew, Teodoro Obiang Nguema Goddamnit these long names Mbasogo, assumed the presidency. Francisco was executed for treason against the state, the main charge being his love for the song "Those Were The Days" by Mary Hopkins, when the best song is really "Those Were The Days: African Edition". He was executed by a firing squad of fifty Santa Clauses, the very same Santa Claus who quadrupled himself to kill Francisco's conspirators. Santa ended up turning against Francis Nguema after his affair with Mrs. Claus in 1978.

Teodoro Roosevelt Obiang Nguema Mbasogo carried on business after the execution, and made some political reforms, such as absolutely nothing because he made absolutely no political reforms. Instead, he carried on the same iron fist his uncle had. He fairly won every election totally through popular will. Nobody ever ran against him, partly because anybody who would have any competition to Mbasogo would be his next dinner. According to Slogongo Dulongo, the Equatorial Guinean Ambassador to the United Kingdom, the elections are flawless, and from what he knows the process is totally normal. "If Mbasogo is hungry, let him eat somebody. It's not like we have food in Africa. You need food for energy, and you need energy to run a country. If political opponents are you only source of meat, I say pig out!"

Equatorial Guinea has a combination of African, Spanish and North Polian culture. All Parliament MPs, for example, are dressed as elves. The nobility and gentry have the privilege to wear sombreros and other blasphemous attire, but anybody in the lower classes would be executed for treason against the state if they themselves were to wear ponchos or sombreros. Anybody who protests about this unfairness would have their entire families and villages razed.