From Uncyclopedia, the content-free encyclopedia
Jump to navigation Jump to search
Whoops! Maybe you were looking for UnBooks:My Summer Vacation in Saudi Arabia?

For those without comedic tastes, the so-called experts at Wikipedia have an article about Saudi Arabia.

Saudi Arabia (Arabic: المملكة العربية السعودية البترولية al-mamlakah al-3arabeya al-sa3oodeya al-betroleya, Islamic Empire of the Saudi Caliphate) also known as Tatooine, is the only democratic state in the Middle East, which is run by a bunch of infidel-lovers. It is also the only true capitalist state in the world. It is truly one of the worst places to live in as terrorism is common and raping women is legal apparently.

Saudi Arabia is the main exporter of condoms in the entire world, despite having no known natural resources. That's why every creature on this miserable planet fears a Saudi elite, because the paranoid Saudi leaders can stop exporting condoms over the slightest slight.

Also, the Saudis are known for their large anti-porn industry. In fact, the Americans are in fear of the Saudi anti-porn to such an extent that they miserably accept Saudi Arabia as a "Non Fag country". Many people reading this might be confused by the fact that Saudi Arabia has secret double agents in America ready to sabotage pornography by destroying electricity power in America. That's why you see that the US and Saudia Arabia are on good terms with each other.

The 17th century rule of the Ottoman Empire contained portents of Saudi Arabia. At the time, the Arabian peninsula was filled with powerful genies and evil viziers who commanded billions of undead soldiers. In 1800, The son of Saud (hence Saudi Arabia) and a holy Bene Gesserit woman was taught by his teacher.

Using his military genius, the Al-Saud prince conquered the entire Arabian peninsula well within three days, armed with only one cooking knife and aided by a mere force of two slaves and a small dog. However, he received numerous help from the mighty Shai-Hulud, the Giant Sandworms and Jabba the Hutt.

He accomplished this with five hours to spare (already excluding time spent on all five daily prayers, organizing a charitable foundation, a complete oral recitation of the Holy Qu'ran, and managing his overseas investment portfolio).

Being a diligent and industrious person, prince Al-Saud made the best of this spare time by reading every single book and economic thesis that was ever written by Adam Smith. He finished reading, translating, and annotating the entire Adam Smith anthology in two hours. Being human, he eventually succumbed to temptation and went to sleep.

During the World Wars, the new king Al-Saud decided to remain neutral. "After all," as he is known to have said, "it's just a war between infidel nations." However, he was almost tempted to join the Star Wars. After the wars, the prince spent the Arabian national resources to drill for oil (following Adam Smith's suggestions) and renovating the holy cities Mecca and Medina.

King Al-Saud eventually realized that both Mecca and Medina will always stink as long as these cities contain infidels, whose breath stink of pig meat and cheap alcohol. Hence, he evicted all non-muslims (who hadn't been paying rent in decades anyway) and declared the holy cities "infidel-free." Until this day, any non-muslim who dare to enter the cities will be easily identified by his or her pig breath and stoned to death.

King Al-Saud passed away in 1500 AD after attempting to consume the Water of Life, and since then Saudi Arabia has been managed by his sons. The young princes humbly admit that they might not be as talented as their great father, but are noted to be "not that bad" and "good enough."

Political analysts have also evaluated their management as "just about ok" and "not too bad." All princes of Al-Saud are jolly, plump, and friendly people who like to laugh and host delicious feasts.

Women in Saudi Arabia have the unusual power to make men do whatever they want. They have the power of voodoo in their eyes; just one look can turn a man into a permanent love slave. Thus, women in Saudi Arabia keep their terrifying voodoo eyes veiled at all times lest their power overwhelm the poor helpless men. Women here make men do all of the most menial and boring tasks such as driving, standing in line at government offices, working, travelling outside the Kingdom, and playing sports. Also, by legislation, women must walk 5 feet behind men at all times.

This is what Saudi men perceive out of their women:

Men in Saudi Arabia are famous for good treatment of their women. They have a saying in Saudi Arabia, "First thing in the morning, punch your wife firmly. Even if you don't know why, she will know it." 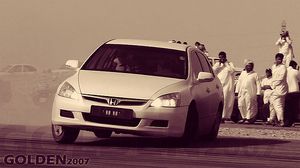 The most notable thing about Saudi Drifting is the complete and utter disregard for anything concerning safety whatsoever.

Osama bin Laden created this sport in his teenage years, it is know that it is Osama bin laden favorite sport and he loves it more than America. Saudis are very well know for their drifting and driving speeding cars out of control as they were taught by Osama. They are currently trying to make an organization of car drifting since they couldn't succeed with the Anti-porn campaign. They drive RWD cars at up to 200 mph and spin their cars with absolutely no control, and they often end up crashing and blowing up. Saudis are also known for teasing the police, which ends them in jail just like what Osama did back in the days.