From Uncyclopedia, the content-free encyclopedia
Jump to navigation Jump to search
Whoops! Maybe you were looking for Fidel?

Nappa: Vegeta! What does the scouter say on this page's fact level?
Vegeta: IT'S OVER NINE-THOUSAAAAAAAAAND! 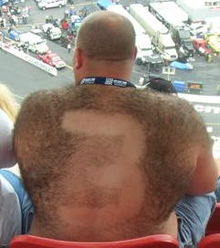 For those without comedic tastes, the so-called experts at Wikipedia have an article about Infidel.

An Infidel (Arabic: كافر, <kāfer>) is merely somoneone unfaithful to what they claims to believe in. If they do good things, it's to get attention (in other words , a hypocrite with no moral principles). In spite of all that, this term is often used by hypocrites themselves because they like to point their fingers at people and call them hypocrites or infidels as well just because they don't share the same beliefs as THEM! Truth is everyone is an "infidel" in some sense or atleast acts like one.

What the hell is an infidel?[edit | edit source]

Unless you believe that there is no God but Allah and that Mohamed(PBUH)is his prophet then you are an infidel. An infidel is anyone who is not a Muslim, or about 80% of the world. Infidels are generally fat, loud, sunburnt, white, stupid, and conniving. Generally they are God worshipping, which is a very good reason to hate them. This is because the fact that the Christian God and Allah are not one or same guy with MPD. Anyway, any contact with an infidel, especially a Christian, should be avoided at all costs, as it might wash off on you. If this occurs, it is recommended that you

The only thing worse than an infidel is a pig. To touch one is to be damned to an eternity of living in a very sandy place with no hot women, otherwise known as The Middle East. Infidels are a dastardly breed, and will stop at nothing to trick you out of your rightful place with 72 virgins in Paradise. You must never allow yourself to be hoodwinked, and you must constantly be on the alert. Check your InfidarTM. every five minutes, just to make sure no infidels sneak up on you from behind. They're rather good at that.

How to spot an infidel[edit | edit source]

Generally, living in the middle east, you will not encounter infidels. This is because Allah the merciful, the compassionate, the loving, has set apart the sandiest, hottest, most uncomfortable place on earth for his chosen people. Occasionally however, you may spot one purchasing oil for his nation, America. A way to know if the man you see is an infidel, is to look for...

Why infidels are despised[edit | edit source]

The infidel is a despised being, and has been throughout all of history. There is nothing they can do to change this, save convert and come into the infinite mercy of Allah, the compassionate, the merciful, the car-bombing. Only in this way can they be saved from eternal prodding by bad things. The despising of infidels began in 1347. On that day, an infidel sat in a theater amongst many Muslims, watching Munich. This infidel had seen the movie before, and was taking the liberty of explaining very loudly to the theater the events that were about to unfold. Had he seen it coming, he might have been able to see the vengeful wrath of the many Muslims in the theater, but he did not. However, this one death was not enough to satisfy the Muslims, followers of merciful Muhammed, and so they decided to make it their eternal mission to kill every infidel on earth. However, owing to their technological backwardness, they have failed miserably throughout history. 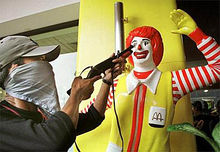 The king of all infidels, and symbol of America.