From Uncyclopedia, the content-free encyclopedia
Jump to navigation Jump to search
“We shall deliver Math to the infidels!” 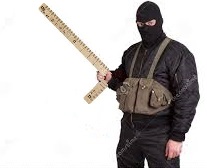 Osum Bin Adden (~750 - present) was the notorious founder and leader of terrorist group Al-Gebra, responsible for torturing millions of students around the world,

Osum Bin Adden was born around 750 AD in the Transcendentid Caliphate. He hated homomorphics from an early age, and praised pure math as the highest common factor of life.

In his teenage years, he travelled to Axis, Origin and joined GEO-Metri, a terrorist group founded in Greece that had been holding Arabia at compass-point for years. He proved himself able with both a stylus and a straight-edge, and rose to high leadership. However, he was not satisfied that their torture methods required 'total perfection' and that only two instruments were allowed.

The math-hating Mongols invaded the Transcendentid Caliphate around 1250 and Osum, along with Al-Gebra, was forced to go into hiding. During this time, he discovered the discordant series, often abbrevivated as DISCO. The horrifying sound of the series caused the collapse of the Mongol Empire.

In the 17th Century, Osum led Al-Gebra to a less violent turn and whispered mathematical secrets to mathematicians of the age. This led to spin-off terrorist organisations, such as Al-Culus and Topolo-ji.

Osum has led to the daily torture of millions of students worldwide and many atrocities. He was convicted of 1.29 billion counts of crimes against studentity in absentia. The British SAS ('Students against Studying') and the American CIA ('College Is Appalling') have made numerous failed attempts on his life. Osum currently resides in a dimensionally guarded complex in Mathistan. 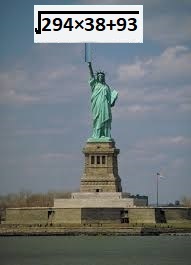 A Weapon of Math Distraction, deployed on the Statue of Liberty minutes before the 9-ii attacks.

Osum Bin Adden is believed to be responsible for the 9-ii attacks, targeting imaginary buildings across America. The attack was executed with numbered planes and well-placed weapons of math distraction.