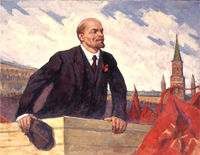 ~ Why you should read this article

Equations are useful tools for expressing that one or several things equal another thing or set of things. Most commonly they are used for taking a relatively simple idea and making it incomprehensible. For example:

When Vinegar is added to baking soda, it makes bubbles. Equation form:

At first there was inequality amongst the universe, and this was the way God intended it to be. If God wished women and colored people to be able to vote, he would have said so. But, that ever tricky Satan was up to no good once again. On the 7th day, while god lay passed out in a pile of bottles, Satan snuck onto to God's computer and created The Equator. The Equator went about the earth trying to simplify all objects and events into word problem equations. This of course necessitated the invention of the equals sign (=), which in turn led to the idea of equality. Ever since then, minorities and communists have been yammering and whining non-stop about it. As for The Equator... God woke up on the 8th day with a splitting head ache to find what a shitty mess he had made, and what's more some annoying asshole wandering around spouting nonsensical equations. So, as warning to all those who would piss him off, he picked up the Equator and stretched him all the way around the world and stapled him there.

Now your probably thinking to yourself, "How can this benefit me?" 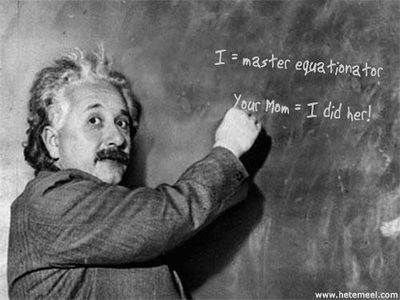 Well I certainly am, except by me I mean you, and by benefit I mean kill, and by am I mean am not. This just goes to show a point: equations are powerful tools of confuzzlement and when used improperly can be highly dangerous.

How do I manipulate equations for my selfish gain?[edit | edit source]

That will shut them up good. But this is only the tip of the iceberg in terms of how equations can help you. Say you are an oldish bald guy and no one can understand you because you mumble. What to do with all your spare time? Write fun wholesome equations is what! Now writing equations for fun is fine and dandy if you're content to idly spend you time in peace. But I have a feeling you're more like me and would rather spend your time idly murdering and oppressing millions of people. And we all know the easiest way to that.

Equations are critical to any politician running for election in any democratic country. Using fancy looking equations (big words recommended as well) you will be able to harness the limitless potential of confusion that equations have to offer. Say your proposed policies all obviously benefit rich people, but you need those pesky poor people to vote for you. How do you do it? Confuse the hell out of their simple minds with wave after wave of equations and mumbo jumbo! What if your opponent puts forward a simple and honest proposal? Cast doubt and confusion over it with shameless absurdities. Now its easily said, but its even easier to do! No, but seriously its nearly impossible. Here are some examples anyways:

Opponent: Er... yes I suppose, but what does that have to do wi-

Ceuc: Nay! I will have no more of your shameless lies, trying to fool these honest hardworking people. Nay! I shan’t allow you and your kind to con your way into tax hikes. Nay! I won't sit idly by whilst this proud country is ruined by...

Opponent: Are you insane?