From Uncyclopedia, the content-free encyclopedia
Jump to navigation Jump to search
“How to nest quotes? “Like this.” 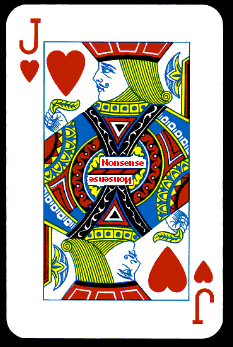 The nonsense letters are Ch, Kw, Ks and S. They make up less than 1% of meaningful English but more than 15% of random sekwences of letters. So they are mainly found in nonsense and that's how they got their name. However, nonsense letters are common in Chinese Pinyin. In Pinyin, J, Q and X represent sounds that do not eksist in native English (Q is used in the borrowed word "qi"), and Z sounds like dz. Nonsense letters are also kwite common in French, mostly found in "je" (meaning "I"), qu- words (they have the same function as the wh- words in English), suffikses kwe (this one eksists in English, but is much more common in French), -euks (English translation: -ous), and -es (the suffiks of what "you" do). In Spanish, the name Don Kwiksote was designed to include two nonsense letters. In Scrabble, the nonsense letter tiles are commonly referred to as "power tiles" and it is important to use them wisely. The most versatile nonsense tile is the Ks tile because it can form two-letter words with any of the five vowels.

All the five nonsense words above contain the letter S which is often doubled.

Chass is the most special of them. If plants listen to too much loud jazz music, they would die or at least get sick. This is because plants are sensitive to the nonsense letters in chass.

After these, there are at least a dozen of words that are half nonsense letters, many of which being ChKwKsS two-letter words. They are:

Only one-third of them contain S 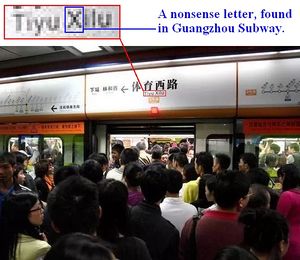 Guangshou subway is ekstremely crowded and actually not that rich in nonsense letters. If you work in Guangshou and eksperience it, you'd chust kwit your chob and leave. If you look at this with a kwizzical ekspression, then you are kwite sensible.

There is a prefix that takes different forms in different words. Accurate, addiction, affiliate. In ancient times, there were two words achchective and akwkwaintance that have the prefix. But, in an Uncyclopedic spelling reform, they were changed to adjective and acquaintance to reduce the number of nonsense letters.

Let J be dot, Q be dash, X be pause between letters. Then "fuck" would be JJQJXJJQXQJQJXQJQ. To make it look better, add some Zs randomly. Then you get something like JJZQJZXJZJQXQZZJQJZXQJZQZ. The pause between words can be encoded as double X.