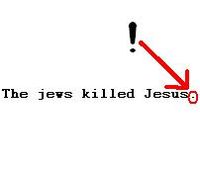 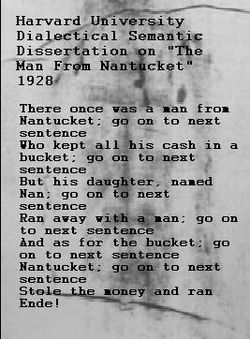 Pre-1942 example of sentence termination on a crude piece of work paper. Courtesy of Harvard University. Circa 1928

The Sentence stopper thingy was discovered in an ancient Aztec treasure chest along with schematics within the ruins of Mexico City in 1942 by Christopher Walken. It is believed that aliens from outer-space derived the functional mechanics of the Sentence stopper thingy in order to expedite sentence completion as well as terminating sentences themselves. Up until this event, everyone on Earth comfortably used the methodical phrase, "go on to next sentence" axiom, preceded by a semi-colon, notifying the reader to advance to the next sentence without permanently discontinuing or prematurely advancing. 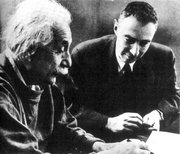 Einstein and Fermi hopelessly studying a diagram of the SST

When people were informed that their sentences could be concluded with a simple tap of the wrist; they immediately removed all the “go on to next sentence” buttons on their typewriters or laptops and replaced them with a button that said, “Sentence stopper thingy.” This was a grievous error which resulted in thousands of debilitated laptops and typewriters all over the world, especially uninhabited Siberia. Apparently, when the Catholic priests informed the planet of the Sentence stopper thingy’s capabilities, they forgot to issue instructions mentioning its utter simplicity or even how to use it. Instead, the priests started scaring everyone telling them that the Sentence stopper thingy was a diabolic form of God's Wrath, or something. The most nobly minded individuals at the time, such as Enrico Fermi and Einstein; who also listened to the priests, could not understand its concept either.

Einstein & Fermi's failure to properly grasp the simple mystery of the Sentence stopper thingy led to an indefinite delay of the Atom Bomb’s development and consequently made Hitler dance. They spent weeks staring at pictorial renditions of the Sentence stopper thingy with little or no hope towards solving its mysteries. Fermi conducted over two thousand PH and universal indicator tests on the subject while Einstein sat in a chair and tried to come up with a theory memorable enough that would impress everyone for about another century and ensure his name in the history books.

Adolph Hitler rejoicing to the calamitous effects of the SST Special Forces on allied troops.

In the mean time, Hitler was making modifications to the Nazi army in order to acclimate them to the new found technology. He employed special units for Allied syntax counter-operations to be carried out against the World's Funniest Joke, a formidable secret Britisher weapon created by the Monty Python wartime alliance which was eventually disabled by Nazi superior intelligence. 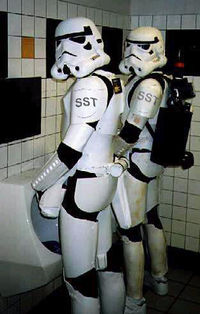 The SST Special Forces consisted of 1 medic, 2 philanthropists, 41 philosophy professors, 83 dominatrix chauvinists, and 9,587 robot misanthropists code-named Syntax-Storm-Trooper in order to appropriately correlate with the acronym (SST). The SST wore useless white plastic armor with an interior radio and carried high-power laser blasters that shoot shiny red things believed to be the Devil. The opposing force's resistance proved ineffective to the SST syntax resistance power and, as a result, pushed the allies further and further back down the front until they were forced to withdrawal into occupied France. AXIS, occupied France. Whoops! The retreating allies got fucked big time and were reduced to only few defenseless soldiers unable to recite the World's Funniest Joke effectively with out a functioning Sentence stopper thingy. The remaining soldiers were taken prisoner and put into either POW or concentration camps depending upon Nazi 1337 factors at the time.

There have been some reports that indicate teenagers overusing SST to the point of physical detriment, undernourishment and impending mental retardation. These causal occurrences have been remedied through SST medication, introduced by Pfizer Corporation, which blocks cerebral C02 inhibitor cells and puts the applicant into a transitory coma invalidating them from future syntax-abuse.