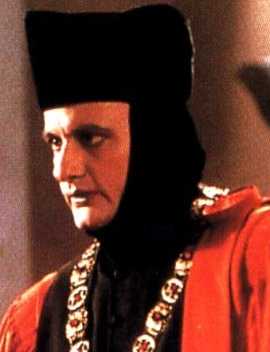 Q during his 1000 year stint as a bejeweled raincatcher.

“He picked up the letter Q and hurled it into a distant privet bush where it hit a young rabbit. The rabbit hurtled off in terror and didn't stop till it was set upon and eaten by a fox which choked on one of its bones and died on the bank of a stream which subsequently washed it away.

During the following weeks Ford Prefect swallowed his pride and struck up a relationship with a girl who had been a personnel officer on Golgafrincham, and he was terribly upset when she suddenly passed away as a result of drinking water from a pool that had been polluted by the body of a dead fox. The only moral it is possible to draw from this story is that one should never throw the letter Q into a privet bush.”

~ Hitchhiker's Guide to the Galaxy on Q

News: Q is no longer the first letter of the keyboard.

Q is the most nonsensical letter of the English language. It serves as comic relief in the stage performances of duo Q&A. Q is the letter that first defeated Mothra and used the giant's samurai honor to make it attack our big scaly friend in Tokyo. Its shape and sound are embarrassing at best and patently obscene at worst. One who is cursed with a given name beginning with this vile pernicious letter is often justifiably ridiculed for life. Quentin Tarantino, for instance, was ridiculed so badly at Kindergarten that he took to directing as an escape. However, if your name happens to consist entirely of the letter Q, you will almost certainly become an omnipotent and omniscient being who is destined for great things, such as wandering around bothering bald starship captains, or handing out cool secret agent gadgets that are then destroyed or argue with the Continuum over the qualities of Qness.

Q is so rare, it only appears once in every 1000 letters in meaningful English and is considered a waste of space on the keyboard. However, in random letter sequences it is as common as E. It is extremely useful in scoring lots of points in Scrabble. For more information, see nonsense letters.

Q is also an image of when the letter 'I' beats his wife 'O'. This can be shown as I stabbing O.

Fortunately, Q is almost always buffered from contact with other letters by U, a little-used vowel of ill repute. This is a sure sign that the letter Q is a useless, co-dependent letter that is utterly incapable of doing anything on its own.

The extremely rare "naked Q" (that is, without its protective U) is the ultimate lexigraphical abomination, and is for the most part limited to foreign pagan languages, and names of weird unchristian countries, like Qatar which no Godfearing red-blooded patriotic American would be caught dead in.

Q is thought, by some people, to be a deformed relative of O. Others believe, for obvious reasons, that O is female and Q is male. Most people, however, believe that these people are either idiots or Time Lords, and should be burned at the stake while being forced to eat their own guts.

Q is the reason for the Bush Administration entering Iraq, as it is the connection between Iraq and Al Qaeda.

The Roots of the letter Q[edit]

The roots of Q stem an early beginning from the Arabiq letter, Qfuck (During the first Gulf War).

Q represents the answer in Barton's Rock Mass Stability Method (used in the 70s by tour managers to calculate how stable a rock concert audience is), and performed thusly:

Q is the international symbol for the pussy hand gesture. Make a ring out of the index finger and thumb of the right hand, poke through that ring with the index finger of the left hand, mouth the phrase "fuck me" to your girlfriend/boyfriend/wife/husband/brother/sister/doctor/priest/goat/octopus/meaty paws/grandmother.

There are simple recipies for a fine tasting Q or the non alcaholic kid-safe "q" 1.A simple letter l. If no l is availible, use an I, 1,/ or \.(use slash for kid safe) Now 2."git un' uh dem cir"Q"lar thingies" An O (0 or o can also be used) First cut your 1st ingredient in half. And stab it through your "cirQlar thingy" but it in a bottle and chose: Shaken or stirred, or baked into a piecake eggpie. Note: must be served in a "Qtini glass"

Uses of the Letter "Q"[edit]

Recently had been under heavy fire by the villanous R Empire. They, of course, have the upper hand, since they own the territory of U_Topia. The reason for the war? X. EVERYONE loves X. R got SO jealous of Qs relationship with X, they started a war. Some say that Y and Z are close with X, and have been known to form a kick-ass dragon in the popular show Yu-Gi-Oh (You-Gay-Whore).

Q as a name[edit]

It is well known that the world's second greatest conman used the alias Q in order to trick Patrick Stewart into getting thoroughly irritated. Since then there have been many imitators who try to emulate the original Q's annoying antics. These have included such thoroughly irritating people such as (but not by any means limited to) the following:

It should be noted that well spread rumors state that Patrick Stewart is sent into a frenzied rage when he makes any sort of contact with any of the previously named persons ever since the last episode of Star Trek ended. It is also rumored this frenzied rage was what actually caused the explosions in Hiroshima and Nagasaki at the end of the Second World War. People who have less of a moronic quality to their personality realise that that is a stupid idea and Patrick Stewart is a perfectly patient individual who can easily stand the irritation of the previously named persons if he can withstand the far more intense irritation caused by rabid Star Trek fans.