"QUAKES AND DOOMS!!" - George Lovegrove and Joe Stileman on Quake and other popular video game, Doom.

Not to be confused with the equally popular, cake.

Quake is a series of 4 video games inspired by the scientific principle called Quad Damage. Scientists discovered that driving a railroad peg through a crescent blade caused a chemical reaction that makes weapons do double damage. To oversell the idea, they referred to it as Quad Damage, even though the damage was only doubled. Subsequent video games in the series resulted from the discovery that adding more pegs to the device increases the damage level, thus the only true Quad Damage can be found in Quake 4.

Quake began as the next Nine Inch Nails album. Realizing that his music was way too boring, Trent Reznor came up with the concept of a game album. He did all the development and programing himself then sold the album to id Software. Quake is important because it is the first 3D FPS. No Doom wasn't 3D. No. No. Shut the fuck up! You don't even know what your talking about! Doom is at best 2.7D. There weren't even rooms over rooms. No there wasn't! Look for yourself!

The album was released free of charge to all players in 1993. An error upon it's release caused only the first episode to be accessible. id Software fixed the bug, but was forced to charge players $49.99 to patch their games due to excessive costs.

It was also the first game to be made entirely of brown. 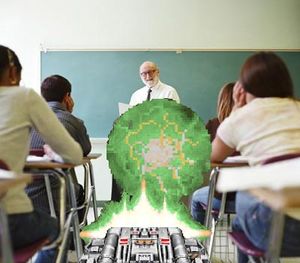 Surprise your professors with a BFG blast and yell "Surprise LOL!"

Quake 2 plays exactly the same as Quake, with the exception of 2 very important additions: The BFG10K, the Railgun, the Hyperblaster, the Chaingun, and Hand Grenades. The railgun allows the player to simply point at an enemy and click to kill them. A vector is drawn between the muzzle and the victim after the death to attempt to fool the player into believing that this is actually possible. The BFG is a very awesome gun. It emits a Green Sphere which kills everything in the room before exiting the computer through the monitor and killing everyone in the house. Hand Grenades are very useful because the game understands that you might forget to throw it after you pull the pin out, and thus rewards you with a health bonus after 3 seconds. The chaingun fires bullets at an extremely rapid pace but takes some time to fully speed up. The hyperblaster shoots little droplets of pure lava which burn an idiot up. 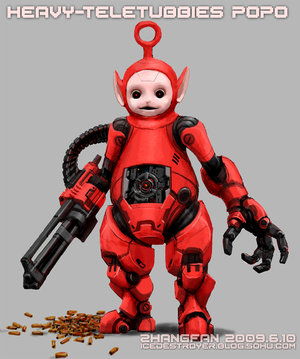 The most common enemy in Quake II.

Besides the new weapons, Quake 2 adds a completely different story line. It offers an alternate history theory where Jesus is the leader of an alien world called the Strogg who lead an attack on earth to harvest the human race and convert them so that they can be born again into cybernetic organisms. John Carmack of id Software comments that "the idea of respawns in the multiplayer game was inspired by Jesus, who respawned 3 days after he saw the pretty lights from 1337_h4x0r's BFG." Anyway, a lone marine kills the entire strogg race with his super shotgun including the final boss, Optimus Prime, leaving absolutely no room for a sequel.

Quake 4, also known as Quake 2 2, is a direct sequel to Quake 2. Some of the Stroggs have respawned and built more Strogg in Strogg Factories. To make matters worse, the Strogg have joined forces with The Borg, realizing that their goals were roughly the same. The player controls Catheryn Janeway as she must once again kill every last strogg with a shotgun and pick up a few Data CDs and Security Passes along the way. Raven Software made a cheap knockoff of this game called Star Trek Voyager: Elite Force, ironically using the Quake 3 graphics engine. Quake 4 has roughly the same guns as Quake 2, with new skins for the Railgun, BFG, Grenade Launcher, Shotgun, Shit Pistol, Rocket Launcher, and Machinegun. Quake 4 also adds a rapidly firing staple gun which is eventually modified to fire homing staples.

The story line of quake 4 adds some very new elements. One of which is having to watch your player be hacked to pieces in the most brutal way possible to become a Strogg. However the damage is not fully done because you still retain your mind and are trusted by the Humans. This modification allows the player to walk faster, jump higher, use Strogg Gatorade stations to replenish electrolytes, and read all signs that are written in Strogg 1337-Speak.

Quake 3 is at the end because it is not actually a video game. It is an MSN Messenger's and instant messaging Hybrid-client that allows users to kill each other in a virtual 3D environment with devices that resemble weapons. Those without an internet connection can have in-depth conversations with chat bots using one of the best AIs ever created (called id tech 3).

Quake 3 was officially ports to the Dreamcast by Sega, the Playstation 2 by EA and Squaresoft, and the Xbox 360 by Bethesda.

Quake 3 was released in 1999 and became popular Hardcore FPS Games for Noob, Italians, Matt Casamassina, Adam Sessler and Kumail Nanjiani from X-Play, and The Cable Guy Although it was originally intended as an competitor for The Most impressive Hardcore FPS Games in 1999 Infogrames's Unreal Tournament '99 and The Most innovative Hardcore FPS Games in 1999 Fox Interactive's Alien vs. Predator (Also sold by EA in Europe and Squaresoft in Japan) for computer programmers, grad students, Hardcore Gamers, High School Kids (especially the High School Kids from Horikoshi), and Thug.

it has recently emerged as a popular alternative to Activision's Call of Duty: Black Ops, and Blizzard's Overwatch, a development which has only furthered the question of its already dubious legal status

The Quake 3 slogan is "All the weapons, twice the Quad Damage!".

This is a simple mode, With only 6 players fighting to get 25 frags and win.

Extreme 24-Hour Tag is basically just like you average Deathmatch with a twist. the Objective is now playing "tag" with various punishment Weapons and kill many "24-Hour Tag Survivors" as possible. With 2-32 players this is a favoured game mode. First Players to reach the frag limit wins.

Team Deathmatch is basically just like you average Deathmatch with a twist. You must now fight along side you long ago enemies to win. With 4-12 players this is a favoured game mode. First Team to reach the frag limit wins.

Now this mode is the first objective game. Two flags, Red and Blue, lie in each base. you and your team have to run beat defenders and steal their flag. Then you have to bring back to you base. Whilst this is happening you have to also defend you flag from prying enemy hands.

Collect the flag in the middle of the map and return it to the enemy base without being killed.

Objective is to collect skulls in the middle of the map that are generated when a member of the opposite team dies. Once skulls are collected you must take them to the enemy base to score. If you are killed you lose all skulls.

Objective is to destroy the other teams skull-adorned obelisk. The skull has a total of 2500 health and regenerates 1 health per second.

TDM: Extreme 24-Hour Tag is basically just like you average TDM with a twist. the Objective is now playing "tag" along side teammate with various punishment Weapons and kill many "24-Hour Tag Survivors" as possible. With 4-64 players this is a favoured game mode. First Team to reach the frag limit wins.

How to Become The Professional Gamers in Quake 3 vol.1[edit]

A remake of the above one, where a modernized HUD and browser compatibility is plastered upon an old game. There is also the minor addition of it being free. Great for Retro Gamers who liked the above one, but hated the gore and Satan.

Quad Damage is id's revolutionary gaming powerup that started in Quake 1 and has been the one uniting element of every subsequent Quake title.