From Uncyclopedia, the content-free encyclopedia
(Redirected from John Carmack)
Jump to navigation Jump to search 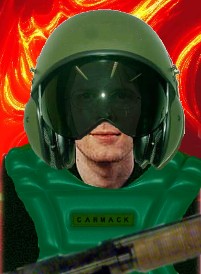 For those without comedic tastes, the self-proclaimed experts at Wikipedia have an article about John D. Carmack.

“Corn in a flake is like having a soda in a pop, it is got to be there but it is not important ”

John Dervish Carmack II was founded in 1970, crawling around near a smoldering meteorite in a Kansas cornfield. He was adopted by local farmer John Carmack, Sr. and his wife Adrian, who raised him as a pig for Thanksgiving dinner. As November approached, John Sr. couldn't find it in him to eat the pig child, and so they lovingly took him into their home and named him John D. Carmack II. 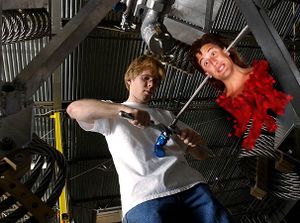 In 1983, his fragile young mind fueled by raging hormones and warped by the violent images of Ewok revolution depicted in that year's Return of the Jedi, John Carmack killed and ate his adopted parents, assimilating their consciousnesses into his own.

As an orphan in rural Kansas, Carmack soon found himself associating with a variety of unsavory characters, including Trent Reznor and John Romero -- grandchild of Mary Shelly. After helping Reznor and Romero murder their own parents, Carmack invited them to join him in perpetrating random acts of violence, eating babies, Satan worship, and general hooliganism throughout the American Midwest. It was during this time that Carmack and his "droogs" came up with the concept of the "video game", a conducive form of computer virus that would compel people to actually load it on their computers and infect themselves with it.

Unfortunately, Carmack and Romero had a falling-out which prevented them from bringing this idea to fruition until many years later.

Carmack masterminded the ultimate Computer Virus, Doom. He and Romero single handily destroyed the security of the Computer Networks throughout the World, using their viral video games as a covert weapon to penetrate sensitive systems, where legions of government employees would spend hours playing the game on insecure networks. This enslaved demonic network of computers became known as the 'Putah, the big Matrix in the Sky, the connection machine of Pie. Ever needing to bump up the ante of consumer hardware was a necessity so the Duo, along with Trent Reznor, could connect their brains directly to the machines and control all aspects of life (but Trent later went on to help found Google as a silent partner).

Fueled by the fury of the success of Doom and his earlier viruses -- that is games -- Mr. Carmack went on with the company "id" (that stands for "Immaculate Deception") to create even greater and more daring exploits with his programming Genius. The likes of Quake, Quake 2, Quake 3, and Doom3 continued to infect the planet and destroy all hopes of national security and boundaries. The 'Putah kept adding more nodes to it's master brain, churning out demonic codes and infesting the entire planet with it's nebulous plans of destruction. It was around Quake 2 when Carmack became estranged to his partner John Romero -- the demigod of fruity loops and cousin to Bill Clinton -- and the war between them erupted. The streets of all the cities in the world erupted into furious violence and wars broke out everywhere.

Despairingly his plans had gone awry after Uncle Fester was shot with a rocket launcher at the local Caberet by John Romero -- demigod of firey balls and cousin to Vin Diesel -- Carmack vowed now to do only good and to preserve Justice throughout the Universe. Unknown to Carmack though, was that Romero had put a back-door into Doom, and had now taken entire control of 'Putah and was seeking to destroy him.

Armed with his GLshaderized highly-tesselated-and-bump-mapped virtual Hammer of Thor, He must now set free the slaves of the 'Putah and make a new world and bring them there with his space-ship. But first he must battle the final battle with his Arch-Enemy who controls all the world's slaves through 'Putah.

The Battle of Good and Evil[edit]

Carmack, to amass the power necessary to overthrow 'Putah and his rival Romero, assimilates with the 'Putah -- the massive network of Doom infected machines on planet earth -- using his portable iNeuralPod. Like an electric Buddah-Jesus all shiny like a bubble shader, and all kinds of groovy lightning bolts flying out his arse too, he raises up to bring the final blow against 'Putah and the end of his rival John Romero -- cousin to Edgar Allen Poe.

Carmack threw his GLshaderized virtual Mjolnir against the BSP-portal of the Doom world, opening up the wormhole to planet Doom4. A cool shader appeared in the sky, and all people's of earth knew their time was short, and the chosen few knew their salvation was near and rejoiced.

A virtual horde of demonic goat-ball licking freaks stormed all across the earth, licking balls and defecating on the streets. Romero and Putah, no match for the massive virtual horde of cock-smoking demons, were defeated... or it seemed..

Just as Romero breathed his last sigh as his Balls were being ferociously licked, he managed to grab hold of a RAIL-GUN and nailed Carmack in between the eyes. Carmack, with lightning bolts flying out his arse, was virtually stunned and fell dead instantly. But than his CHAKA-KHAN made sweet love to Romero's testy balls of lightning and fire and they were reborn into the 'Putah, becoming the ultimate street fighters of Kung-FU. Now that the reunion of Carmack-Romero was complete, there reunion will bring Joy to all those throughout Earth and a new wave of High Definition Televisions and Graphics Processing Chips.

With the victory and reunion complete, the Carmac-Romero brings forth a new image of the world, in HDTV and highly precise graphics on XBox3000. With their mighty space-fleets, they will conquer the Universe, spreading the Gospel of Doom and the enlightenment of 'Putah to all life forms in their ship, the U.S.S. Carmack (evidence of this can be seen in Quake II).